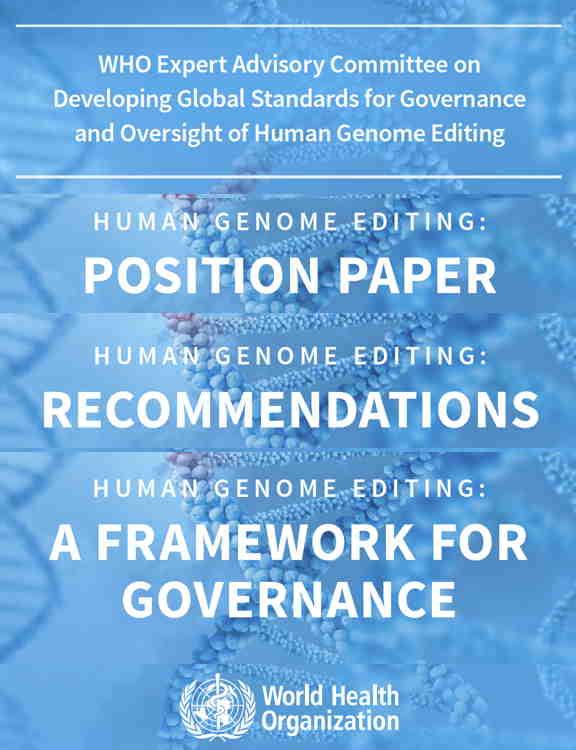 This publication could represent an important step in the continuing discussions, both nationally and globally, about what applications of human genome editing are appropriate, how to manage their regulation, and what is required to ensure that both research and medical practice are performed legally and ethically. The significance of the reports begins with WHO’s status as an agency of the United Nations that is stepping up to assert its moral leadership, and making what appears to be a long-term commitment to an ongoing work program around gene editing and other emerging technologies.

The launch of the Committee’s reports was elaborate, given pandemic conditions, with not just a media advisory but a virtual press conference that featured WHO’s chief scientist and six of the 15 members of the Committee itself. They presented two main documents, Recommendations and A Framework for Governance, plus a short Position Paper that summarizes both. There was also an official press statement that included the following quote from Dr. Tedros Adhanom Ghebreyesus, the WHO Director-General:

Human genome editing has the potential to advance our ability to treat and cure disease, but the full impact will only be realized if we deploy it for the benefit of all people, instead of fueling more health inequity between and within countries.

This is an important caveat, and at present extremely relevant to gene therapy — somatic genome editing — for which the initial price tags, and some of the justifications offered for them, have been frankly obscene and sometimes counter-productive. The substantial focus on these matters is a useful reminder that the prospect of gene therapies, though they are widely supported and eagerly anticipated, raises significant concerns about ethical research as they are developed, and fair access to any treatments that emerge.

The reports also address human gene editing as applied not to existing patients but to sperm, eggs, and embryos. In this category, it distinguishes germline genome editing — research on embryos or gametes that does not lead to reproduction — from heritable genome editing, which involves initiating a pregnancy with a modified embryo, and thus passing altered genes on to a future child and subsequent generations. (The term germline used to be associated with heritable; this usage is a recent evolution.) The WHO reports refrain from more flamboyant terms, including “designer baby” and “CRISPR-baby” technology.

The reports recognize both similarities and differences among the social, ethical, and policy challenges raised by somatic, germline, and heritable genome editing, while striving to apply a common list of values and principles across them. The broad scope with which the Committee was tasked bespeaks WHO’s commitment to a comprehensive view of global health equity,  though it — and perhaps also the careful but awkward terminology adopted — may have somewhat muddled the response to the Committee’s recommendations about heritable genome editing.

A Framework for Governance “intends to provide those responsible for the oversight of genome editing with the tools and guidance they need.” WHO is acutely aware that national governments are those responsible in practice, and the reports attempt to guide those authorities in their decision making.

In considering heritable genome editing, the Framework focuses on the complexities of the ethical, social, and inevitably political questions raised — not on how they should be answered so much as how they should be approached. That may be received as somewhat frustrating, since two years ago the Committee asked the WHO Director-General to issue an interim recommendation that “it would be irresponsible at this time for anyone to proceed with clinical applications of human germline genome editing.” (So why not endorse a moratorium?)

Notably, the WHO report is realistic about the existence of current laws and treaties around the world, rather than discussing the issues as if there were a blank slate to work on. For the current status of legislation on heritable genome editing, they rely on the 2020 analysis of the global policy landscape co-written by Marcy Darnovsky and Katie Hasson of CGS with Françoise Baylis (the eminent Canadian bioethicist, who was a member of the Committee) and her colleague Timothy Krahn. To recap:

Adding to the Debate

The Committee’s work needs to be seen in the context of public debates, private discussions, and formal reports that have occurred over the last six years or so, which have focused primarily on heritable and germline rather than somatic genome editing. Several of those, including two large scientific “summits” and two reports organized by science academies in the US, the UK, and China, were discussed on this blog last month, in “Heritable Human Genome Editing: Who Decides Who Decides?” Others include an ethical review of Genome editing and human reproduction from the UK Nuffield Council on Bioethics in 2018.

The WHO reports can be seen in some part as a response to the 2020 report on Heritable Human Genome Editing, by the National Academy of Medicine, National Academy of Sciences, and the Royal Society, which mapped out “a responsible clinical translational pathway from rigorous preclinical research that determines whether and how editing can be performed efficiently and with high accuracy, to clinical application.” That report focused on the science, and rather explicitly delegated the public discussion to the WHO. Which, in turn, has rather explicitly delegated legal implementation to national governments.

The process approach does, however, provide a valuable service. It identifies and emphasizes relevant “ethical values and principles,” along with the commitments associated with them. It lists four categories that should “inform how decisions are made” (all of them involving transparency and responsible stewardship) and nine that “inform what decisions are made”:

That’s a good list, if a little aspirational; they are not always fully applied throughout the reports. “Social justice,” for example, includes:

A commitment to develop human genome editing in ways that: (i) promote human health, collective well-being and the common good; (ii) look after the needs of communities experiencing greater health burdens; (iii) reduce socioeconomic inequality; and (iv) avoid discrimination. In consultation with relevant communities, efforts should be made to ensure access to adequate resources, skills training and capacity-building for researchers, clinicians, policymakers, genetic counsellors and others as needed. (A Framework for Governance, pp. 13–14)

The difficulties in enforcing or even encouraging this approach are of course manifold, but at least it is out there. That, and the statement attributed to Dr. Tedros, support the headline about the reports in the coverage by the official United Nations outlet, UN News (which refers to WHO as “the UN health agency”):

The report’s Recommendations focus on what WHO itself can and should do. They stress in particular the further development of the Human Genome Editing (HGE) Registry, including the addition of preclinical germline genome editing research; the registry is set up to use data collected by the existing International Clinical Trials Registry Platform (ICTRP). That is also a good idea, but it’s going to take some work: the ICTRP only has 126 records total at this writing, only 28 of which are more recent than 2018. Apparently it is a resource that needs intensive promotion.

Immediate press reaction to the reports was limited, outside of specialist journals. The New York Times and Wall Street Journal covered them, but most U.S. newspapers relied on the Associated Press or Reuters. (A quick set of searches suggests that coverage in Europe was similarly light.) The reports were available to journalists several days before release, and a few outlets were ready to publish the moment the embargo was lifted. Aside from the official announcements, Megan Molteni, in STAT, seems to have been first, according to a contemporaneous search, rapidly followed by the Associated Press, Reuters, and Science Media Centre. A sample of the initial headlines, and subheads where appropriate:

The Center for Genetics and Society issued a press statement, headlined:

We need a global ban on human genetic engineering, not ‘governance’

A first, and relatively simple, move would be to take heritable human genome editing off the table, at least by implementing a substantial moratorium. It is noteworthy that President Biden’s Science Advisor, Eric Lander, has long advocated this. Now is the time to do it. Even Robin Lovell-Badge, one of the central scientific figures in the global discussions, asserted at the WHO Press Conference that

“No-one in their right mind at the moment, should contemplate doing it because the techniques are simply not safe enough or efficient enough and we’re not ready in terms of looking at all the ethical considerations, societal considerations.”

Well, yes. Those are important reasons why a substantial moratorium is needed now — to stop the rogues, and to give the world as a whole the chance to decide both how to implement gene therapy fairly and whether heritable human genome editing should ever be permitted.