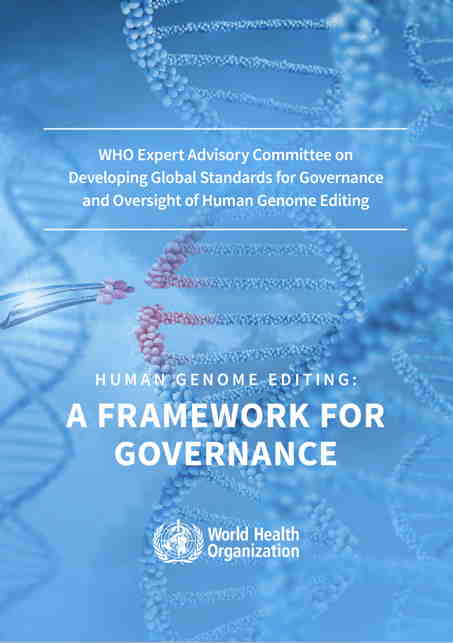 Today a World Health Organization advisory committee released two reports with recommendations for governance of human genome editing, the first report on this topic coming from a global authority. The committee’s recommendations on heritable genome editing – that is, altering the genes of future children and generations – have been eagerly awaited, especially in light of efforts by some scientists to chart a “translational path” toward its clinical use.

“On heritable genome editing, the WHO recommendations avoid some of the pitfalls of other recent reports,” said Marcy Darnovsky, PhD, Executive Director of the Center for Genetics and Society. “The WHO committee doesn’t preempt the whole conversation by setting out a predetermined path for bringing CRISPR-baby technology to market. But neither do they set up the ‘off limits’ signs that are so clearly needed.”

Unlike several influential reports on heritable genome editing, the WHO reports give significant weight to the global societal repercussions of heritable genome editing, and to the vast social inequalities and profit motivations that would shape its use. The WHO committee recognizes the existing widespread prohibitions on heritable genome editing, already established by more than 70 of its member nations and a Council of Europe treaty. They call for global cooperation, acknowledging that lack of international coordination would allow unscrupulous scientists and entrepreneurs to evade rules and regulations. But the reports stop short of calling for a global ban or moratorium, putting the WHO out of step with many of its member states.

“Sitting back and allowing countries to go their own ways would be a huge mistake,” said Katie Hasson, PhD, the Center for Genetics and Society’s Program Director on Genetic Justice. “The WHO reports recognize this, and call for global cooperation – an entirely feasible prospect, since so many countries already have policies that prohibit heritable genome editing. It’s disappointing that their recommendations don’t go further.”

The WHO reports also make a welcome and persuasive case for broad, inclusive, and meaningful public engagement and empowerment in the debate about heritable genome editing. The Center for Genetics and Society, among other organizations, contributed to the extensive consultation process leading up to these reports, and this should be just the beginning of a bigger role for civil society voices.

“If allowed, heritable genome editing would reinforce and exacerbate existing inequalities and pose significant harms to women, children, and marginalized groups, especially considering the history of eugenics and policing reproduction. Despite this, the perspectives of civil society groups working toward gender, racial, disability, reproductive, and LGBTQ justice have seldom been sought or heard,” Hasson said. “A global moratorium, at the very least, is needed to provide time for the public empowerment process that the reports encourage, and to apply the principles of social justice and solidarity that they invoke.”

While not explicitly recommending a global moratorium, the advisory committee has called on the WHO Director General to reiterate his July 2019 statement that heritable genome editing experiments would be irresponsible at this time and should not be approved by national regulatory bodies.

“The WHO reports should serve as a wake-up call for those who think that heritable genome editing can be controlled through professional guidelines that scientists or fertility doctors set up behind closed doors – or by countries vying for technological ‘firsts’,” Darnovsky said. “Without robust and inclusive public engagement, global cooperation, and enforceable policies, we’re headed down a path toward shady offshore CRISPR-baby clinics offering ‘upgraded’ genomes to those who can afford them. Heritable genome editing can play no part in a fair and inclusive global future.”