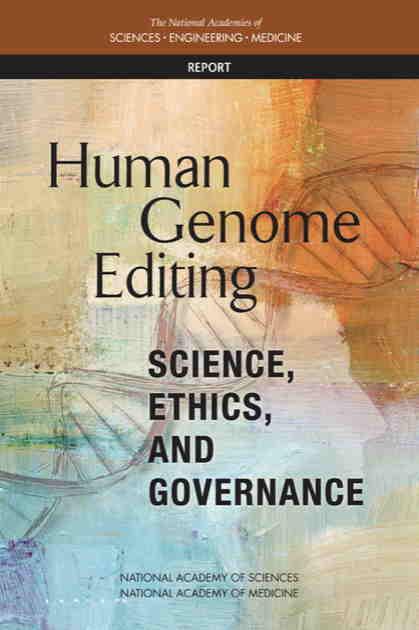 In the last six years, scientific groups have organized two multi-day International Summits, both with published summaries, and at least four major reports that discuss whether heritable human genome editing should be allowed, and if so when and under what circumstances. The general trend in these quarters has clearly been supportive of developing the technology, with two important caveats: safety and public acceptance. A casual observer, such as a busy politician who might have to vote on the subject, might well be impressed by such consistent conclusions.

They certainly are consistent, but a major reason for that consistency is that this work is largely performed in an echo chamber. Analysis of the listed authors, reviewers, and organizers for six important projects, chosen because of their prominence, indicates that a remarkably small group of people, mostly specialist scientists and bioethicists, seem to be central to what we might call the official discussion of heritable human gene editing.

That’s not quite how it seems at first. The projects in question, in chronological order:

A total of 123 individuals were involved in developing, writing, or reviewing these initiatives. Of these, 25 worked on more than one, including six people who were involved with three. Two (Alta Charo and Kazuto Kato) show up four times.

And then there is Robin Lovell-Badge. He was involved with all of the projects, as well as chairing both the 2017 Royal Society public engagement project and the planning committee for the 2022 Third International Summit on Human Genome Editing. Lovell-Badge is a distinguished scientist with a career that extends back to the 1970s, when he worked on mouse stem cell and embryo research with Nobelist Martin Evans. He was on the steering committee of the Hinxton Group, which describes itself as an “informal collection of individuals interested in ethical and well-regulated science.” It considered “Genome Editing Technologies and Human Germline Genetic Modification” in 2015 and published a paper in Nature that included this notable comment:

Even for members of the Hinxton Group — well-informed people who concur that basic research involving genome editing, including that in human sperm, eggs and embryos, has tremendous value — discussions about possible reproductive applications were charged. In fact, we found it impossible to agree on potentially defensible uses for editing the human germ line without having the context and facts of a particular case. … Ultimately, we could not even agree on the merits and downsides of listing possible clinical uses — some were concerned that making such a list could be taken as tacit approval.

A few members of the projects we’ve tracked are prominent figures who have been publicly skeptical of heritable genome editing. Perhaps the most notable is Eric Lander, who last week was confirmed as Science Advisor to the President, a position that President Biden has elevated to cabinet level. Lander was a member of the First International Summit organizing committee and was a listed co-author of the 2020 National Academies/Royal Society report, as well as an author of “Adopt a moratorium on heritable genome editing” (Nature, 2019).

Françoise Baylis, another co-author of the call for a moratorium, and author of Altered Inheritance: CRISPR and the Ethics of Human Genome Editing, was also on the first International Summit committee and is a member of the WHO committee. J. Benjamin Hurlbut, co-author of “A global observatory for gene editing” (Nature, 2018) was a reviewer for two reports. Fyodor Urnov, co-author of “Don't edit the human germ line” (Nature, 2015), was a reviewer for the 2017 NAS report.

There are others who are not known to be enthusiastic about germline genome editing; but the overall impression left by all these initiatives (with the possible exception of the upcoming WHO report, which has yet to be published) is that the technology is on its way and “education” is needed to ensure the public’s support.

The 2020 Report by the International Commission of the National Academies and the Royal Society, for instance, was “specifically tasked with defining a responsible pathway for clinical use of HHGE [human heritable genome editing], should a decision be made by any nation to permit its use.” The Commission does say it considered “associated social and ethical issues.” But it essentially outsourced those topics to the World Health Organization’s committee, which “will also consider the broader social and ethical questions raised by the possible use of HHGE, whereas this Commission’s mandate is limited to issues inextricably linked to research and clinical practice.” Since the WHO Report was significantly delayed by the pandemic, it remains to be seen whether it will take up the broader issues in addition to its aim to “advise and make recommendations on appropriate governance mechanisms.” Of course, should either committee have wished to delve deeper into their counterpart’s thinking, all they had to do was ask either Kato or Lovell-Badge, who were on both.

The people involved are, like Brutus, acting honorably. There may be elements of careerism at play, and of course they advocate for their own positions. But there do not seem to be widespread financial shenanigans or hidden motivations among the players.

However, these committees are drawn from an inner circle of elite scientists and specialist bioethicists, who select each other and form a kind of community. This doubtless has its advantages, like improving intra-group communication and reducing misunderstandings, but it also has its hazards. Almost any professional group will tend to oppose interference by outside regulators. (Consider the case of He Jiankui and the silence of those who knew.) Almost any group of scientists, whatever their opinions on heritable human genome editing, is likely to support self-regulation, and generally to have faith that cutting-edge science represents progress. They have little incentive to look beyond their own circle.

The essential problem is that six years of discussion among the elite have more or less left us where we began. This accumulation of more or less aligned opinions may come to look like “consensus.” But that may be only because the discussion never involved an adequate diversity of perspectives. If nothing else, it is clearly time for new thinking.