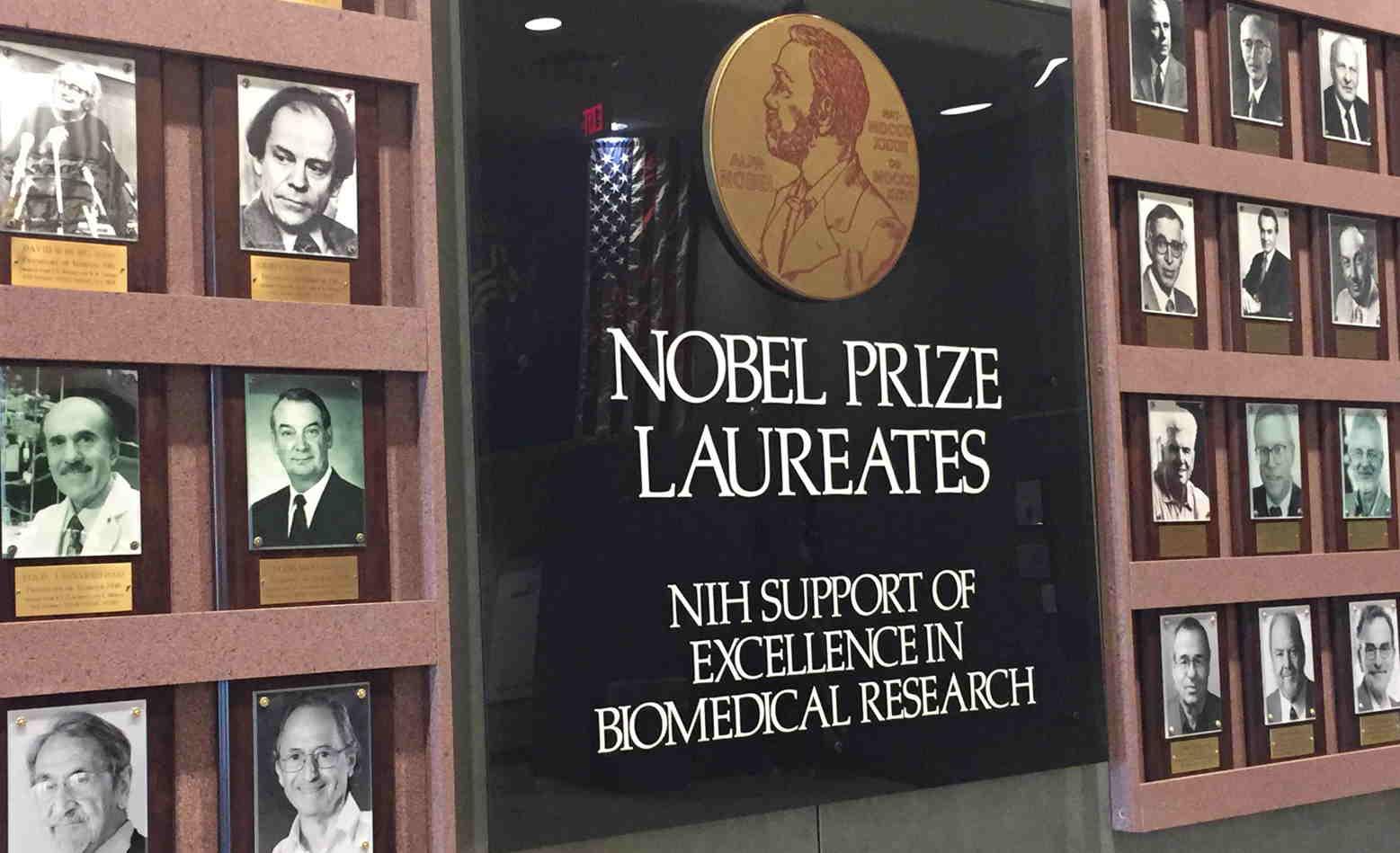 Congratulations to Emmanuelle Charpentier and Jennifer Doudna on their joint award of the 2020 Nobel Prize in Chemistry, “for the development of a method for genome editing.” That is, of course, CRISPR, and the award is the first science Nobel won by two women, a significant milestone as Charpentier acknowledged:

“I think it’s very important for women to see a clear path. I think the fact that Jennifer Doudna and I were awarded this prize today can provide a very strong message for young girls.”

The award is not a surprise, exactly, since the development of CRISPR has been seen as Nobel-worthy (1, 2, 3) almost since the moment their first paper (with co-authors Martin Jinek, Krzysztof Chylinski, Ines Fonfara, and Michael Hauer) was published in Science, on August 17, 2012. The question was, who exactly would get the prize? Joint Nobels are awarded to a maximum of three people, all of whom must be living. Charpentier, who is French but based in Berlin, and Doudna, who was raised in Hawaii and is based in Berkeley, were jointly responsible for their work, and clearly favored, but speculation was rife as to who the third might be.

Feng Zhang, of the Broad Institute of MIT and Harvard, was the most frequently mentioned contender. He led a team that demonstrated the use of CRISPR in mammalian cells (the first paper covered in vitro work); George Church of Harvard and MIT (once Zhang’s supervisor) and his team published a related paper simultaneously. The Broad quickly filed for patent rights; UC Berkeley also filed and an extended and expensive legal battle ensued, which is still not finished. Essentially, Berkeley’s lawyers won in Europe and the Broad’s won in the US. For the scientists, life and work continue.

Other scientists did important work on the topic. Virginijus Šikšnys submitted a closely related paper around the same time as Charpentier and Doudna, though it was rejected at first and published later. Francisco JM Mojica of the University of Alicante, Spain, did foundational research and actually coined the term in 2001 with Ruud Jansen of Streeklab Haarlem, in Holland. It’s a classic tale of collaborative, multinational research over many years, finally leading to a dramatic climax (though not an end). Wired ran a summary in 2015 and asked:

Could the patent for a discovery go to one scientist, and the Nobel prize for the discovery to someone else?

Now we know: Yes. Commenting on the Nobel announcement, Church downplayed the importance of patents in an interview with STAT, and called the prize-winning work “a key turning point” that others “turned into a technology.” Moreover, he explained to Nature:

Although he is proud of the work in his lab and Zhang’s lab — which adapted the system to work in mammalian cells, opening the door to modelling and potentially treating human diseases — Church says that this work could be classified as engineering and invention, rather than scientific discovery. “I think it’s a great choice,” he says.

“I’m over the moon, I’m in shock, I couldn’t be happier,” was Doudna’s reaction. “It’s something you hear, but you don’t completely connect,” said Charpentier. “I was very emotional.”

This award is an opportunity to celebrate the importance of women in science. (Madame Curie would doubtless approve.) Doudna emphasized this:

“For many women there’s a feeling that, no matter what they do, their work will never be recognized as it might be if they were a man. I’d like to see that change.”

Charpentier is of the same mind:

“My wish is that this will provide a positive message to the young girls who would like to follow the path of science, and to show them that women in science can also have an impact through the research that they are performing.”

CRISPR and the Prospect of Heritable Genome Editing

Both Doudna and Charpentier have talked about the social implications of human genome editing, and weighed in on the controversy about using it to alter the genes and traits of future children and generations. But their views sharply diverge. Doudna’s position, in sum, is that heritable human gene editing should move forward with careful oversight – a position she reiterated after the He Jiankui scandal. Charpentier has clearly opposed heritable gene editing from the earliest days of the conversation.

Doudna took an early and influential step in shaping the debate about using CRISPR to engineer the human germline by convening a meeting in Napa, California in January 2015. Its agenda, as later described by Stanford bioethicist Hank Greely, was “to discuss the bioethical issues raised by the explosion in new genomic editing methods.” The invitation list drew heavily from scientists and bioethicists known to support heritable genome modification. The meeting led to a multi-authored paper in Science (April 3, 2015) titled “A prudent path forward for genomic engineering and germline gene modification.” Several key figures in this group went on to shape the increasingly frank advocacy of heritable genome editing that has been put forward by the U.S. National Academies’ reports and “summits.”

Doudna is sometimes seen as a skeptic about heritable genome editing. She is frequently asked about a nightmare that she recounted in a 2015 New Yorker profile, in which Hitler wants her to explain CRISPR, presumably to engineer Übermenschen. Her 2017 book A Crack in Creation counsels caution, but ultimately portrays heritable genome editing as a personal choice. In comments since then, she has expressed support for the National Academies’ goal of moving forward with “a responsible clinical translational pathway” toward using CRISPR to alter the genes and traits of future children and generations.

Charpentier, who stays much further away from the media spotlight than her colleague, has repeatedly affirmed the prohibitions on reproductive genome editing that exist as law in dozens of countries. She was one the 18 authors of the 2019 call in Nature to “Adopt a moratorium on heritable genome editing.” So was Feng Zhang, as well as Eric Lander, Françoise Baylis, Paul Berg, and other luminaries. Doudna’s name was conspicuously absent, though she was expressly invited to add it.

The celebration of Charpentier and Doudna's work on CRISPR is a chance to broaden the discussion about the usefulness and limitations of human gene editing. Should we do this just because we can? More accurately, perhaps, should we attempt this just because we hope we can?

It is vitally important to keep in mind the eugenic possibilities inherent in the concept of “improving” future children. Twentieth-century eugenic horrors were about eliminating the allegedly unfit. Such abuses are still committed, notably in the forced sterilization of prison inmates, who may not even know what has been done to them. But the threat of 21st-century eugenics lies in the accumulation of individual choices to create new people who would supposedly be “better” due to their engineered genomes. How little have we really learned?

Disability rights advocates continue to remind us that we need to ask whether scientific innovations like heritable gene editing are likely to create a future that respects or devalues difference and disability as a part of the human condition. They have documented the effects of ableism on what Rosemarie Garland-Thomson has identified as “the existential threat to persons with disabilities.” CGS has compiled a selection of resources on “Disability Rights and Heritable Genome Editing” to help further understanding of how narratives about biotechnologies are regularly distorted even by well-meaning people.

CGS continues to support the development of somatic gene therapies to treat patients, so long as they are safe, effective and affordable. Germline interventions, however, should be taken off the table, for social reasons even more than the scientific ones.

That 2012 Charpentier-Doudna paper in Science ends with a sentence that almost rivals the famous understatement of Watson and Crick:

We propose an alternative methodology based on RNA-programmed Cas9 that could offer considerable potential for gene-targeting and genome-editing applications.

Heritable genome editing has been discussed since the 1960s; the contours of the discussion about the “considerable potential” of the new genome-editing tool were clear in 2012."

Nobel Prizes recognize meaningful scientific advances. How we decide to use these advances requires wisdom about social justice, human rights, and the shared future we want to build. These difficult and urgent questions need broader public discussion from a range of perspectives.

Despite repeated calls for broad societal discussion on heritable uses of this potentially species-altering technology, we have yet to see sustained efforts toward inclusive, meaningful public deliberation. An enforceable, global, legally binding moratorium or prohibition is urgently needed to allow time for consideration of whether to pursue heritable human genome editing.

Mythmakers in the Market for Perfection

Henry Kissinger, Benjamin Franklin, Steve Jobs, Albert Einstein, Leonardo da Vinci: Giants in their fields and times, these men also have the distinction of having received full biographical treatment from Walter Isaacson, America’s most prolific recorder of lives of creative...

In a First, Surgeons Attached a Pig Kidney to a Human, and It Worked

Surgeons in New York have successfully attached a kidney grown in a genetically altered pig to a human patient and found that the organ worked normally, a scientific breakthrough that one day may yield a vast new supply of organs...

Animal Biotechnologies
© / A Project of the Tides Center 2021 All rights reserved.