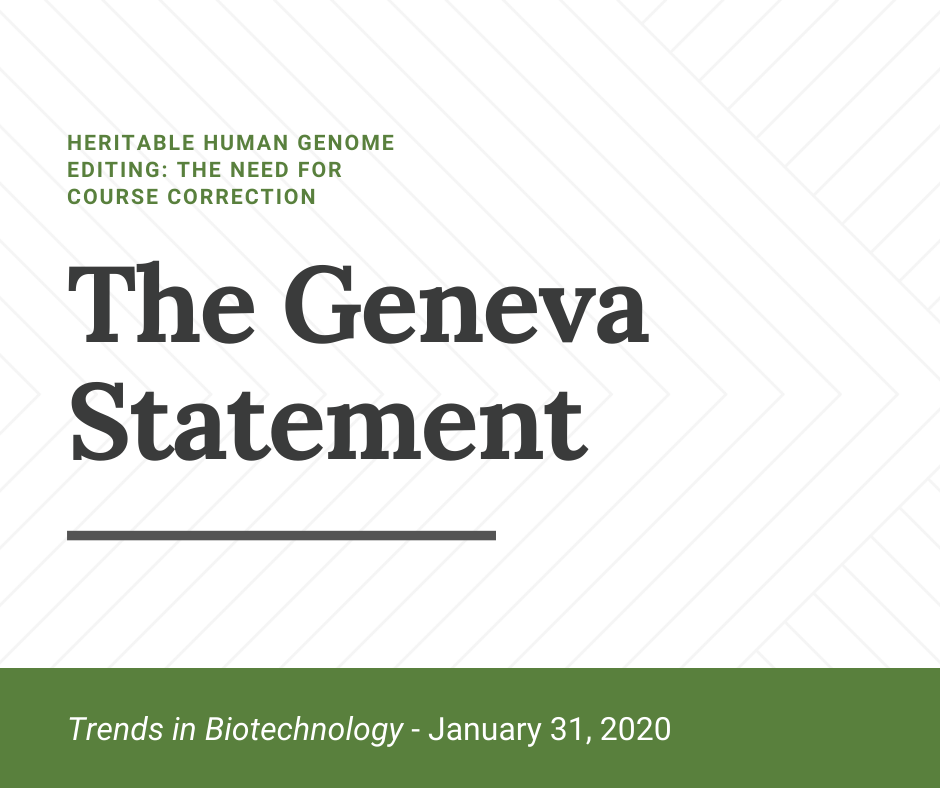 The “Geneva Statement on Heritable Human Genome Editing: The Need for Course Correction” points to the need to clarify misrepresentations, center societal consequences and concerns, and foster meaningful public empowerment and deliberation on the potential uses of this species-altering technology. It is a robust and cautionary statement about the future of heritable genome editing that seeks to disrupt the current trajectory of discussions about the applications of this technology and demands broad societal consensus before any decision is made about whether to allow its use in humans.

Read the full text of the statement.

“We’ve heard calls from all quarters for public engagement and participation in discussions about heritable gene editing. But we don’t see inclusive deliberations taking place,” said Hasson. “Small groups of self-appointed elite scientists who want to map out how to use genome editing must not skip over the necessary societal deliberations on whether it should be allowed at all.”

The “Geneva Statement” takes issue with the current state of the deliberations along three dimensions:

The “Geneva Statement” brings new voices and perspectives, particularly those of social scientists, human rights advocates, and civil society representatives, to a conversation that has so far been dominated by scientists and bioethicists. Despite repeated calls to slow down, diversify, and democratize the decision-making process since the “CRISPR babies” bombshell of November 2018 (when Chinese scientist He Jiankui announced the births of twin girls whose genes he edited as embryos), a panel convened by the US National Academies of Science and Medicine and the UK’s Royal Academies is proceeding with a “translational pathway” for heritable genome editing.

“We need to work toward broad societal deliberations that grapple meaningfully with what’s at stake, including the very real possibility of worsening existing discriminations and disparities,” said Darnovsky. “Bringing heritable genome editing to market could usher in a new form of eugenics, even a genetic caste system.”

The “Geneva Statement” originated during a workshop hosted by the Brocher Foundation in Geneva, Switzerland, which also generously provided financial support for Open Access publication. Reflecting on the workshop discussions and the impetus behind the statement, co-organizer Roberto Andorno (University of Zurich) said, “the fundamental question, before discussing the risks [of this technology], is whether we really want a society, a future where children are genetically designed by their parents. Do we really want that? That's the question that should be discussed before any other issue. And obviously, scientists are not competent to decide alone about this. This concerns all of us as a society.”

To hear more about the origins of the “Geneva Statement,” watch a round-table discussion among some of the authors. For a full author list, see our press release.

The statement’s insistence on committing the necessary time and effort to ensure public deliberation is particularly timely given the ongoing discussions among expert-led panels and commissions about the potential future use and regulation of human heritable genome editing. As the authors note, “No decision about whether to pursue heritable human genome modification can be legitimate without broadly inclusive and substantively meaningful public engagement and empowerment.”