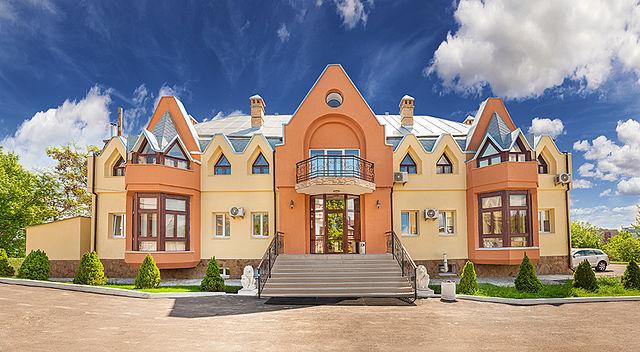 Though major media channels have taken up the story of intended parents from a dozen countries desperate to reach their babies, few accounts have noted the concerns about international commercial surrogacy that preceded the complications introduced by the COVID crisis. (Read more about these longstanding concerns in CGS consultant Emily Galpern’s recent post.)

As reports begin to trickle in about happy endings for some of the parents, we’ve been looking further into BioTexCom. The results are disturbing.

This one clinic exemplifies many of the longstanding concerns about the international fertility and cross-border surrogacy industry, from the exploitation and abuse of economically vulnerable women as surrogates and egg donors, to scandals involving the abandonment of disabled children, to accusations of baby-selling or human trafficking.

BioTexCom is also one of a few fertility clinics worldwide that is rapidly commercializing a risky, untested, and highly controversial technique that it markets as “mitochondrial donation.” Their promotion of this technique treats it as just one more “add on” to the standard complement of fertility treatments.

BioTexCom’s trail of scandals has been documented  in recent years by media outlets such as ABC News Australia, El Pais, and Al Jazeera; its current suite of dubious practices is on prominent display on its website. But few of the stories about the stranded surrogacy babies touch on any of this. One noteworthy exception, an article published by Marie Claire in partnership with The Fuller Project, calls BioTexCom Ukraine’s “most notorious surrogacy agency.”

In 2011, an Italian couple returned home with a baby born from a Ukrainian surrogate in an arrangement facilitated by BioTexCom. After mandatory DNA testing by Italian officials, the baby was found to have no genetic link to the intended parents, preventing them from being officially recognized as the parents. (The child was eventually adopted by a different couple in Italy.)

Alleging that the 2011 case was not an isolated incident—and presumably informed by the 2012 revelations of a “baby-selling ring” in which Ukrainian fertility companies had taken part in creating “an inventory of unborn babies” for unsuspecting parents—Ukrainian authorities in 2018 initiated investigations into BioTexCom. Prosecutors requested permission to conduct genetic testing for more than 200 children throughout Europe and in China. They charged BioTexCom’s owner Albert Tochilovsky and its head physician with human trafficking, document forgery, and tax evasion, and placed Tochilovsky temporarily under house arrest. It appears that the case has not gone to trial. Tochilovsky, who has owned BioTexCom since 2012, claimed that the 2011 case was “before his time” and, in any case, was a simple embryo mix-up that should only be subject to administrative penalties.

In 2019, an Australian reporter uncovered the case of Baby Bridget, whose American intended parents refused to take custody after she was born prematurely and required significant medical care. At the age of 3, she had spent most of her life in hospitals and had been placed in a children’s home in Ukraine. There she received care and therapy for a range of disabilities while awaiting Ukrainian citizenship, without which she could not be placed for adoption. Tochilovsky claims that Bridget’s intended parents were never clients at his clinic and that there must be another clinic impersonating BioTexCom to ruin its reputation.

BioTexCom is the major player in Ukraine’s booming surrogacy market, which is fueled by poverty and instability in the country. It’s right there on the website: “The cheapest surrogacy in Europe is in Ukraine, the poorest country in Europe.” Tochilovsky claims that BioTexCom handles one quarter of the surrogacy market in the world and 70% of the market in Ukraine.

The company differentiates itself from other fertility clinics and surrogacy agencies by offering all-inclusive packages, including a “Guaranteed Success” package for IVF with a money-back guarantee if after five cycles there is no pregnancy that passes twelve weeks. Their surrogacy packages, starting at €34,900, offer unlimited IVF cycles for surrogates if using donor eggs (patients are limited to two egg retrievals using their own eggs).

BioTexCom offers prospective customers a luxury experience, with accommodations in “high-class hotels,” as well as meals, a driver, and even a local cell phone all provided by the clinic. Their “VIP Package” for €64,900 goes beyond the standard all-inclusive surrogacy deal (€34,900) by including sex selection, extra compensation for surrogates who carry twins, and a jump to the head of the line (less than four months wait versus up to a year in the standard surrogacy package).

A massive full-service operation supports these all-inclusive offerings. BioTexCom owns and operates not just the clinic space, but also apartments, hotels, a logistics team, and private cars and drivers. This kind of “vertical integration” is rarely seen in the fertility industry, even in cross-border surrogacy agencies that specialize in “reproductive tourism.” Tochilovsky has plans to extend his business empire horizontally too, hoping to eventually commercialize fringe biotechnologies that are ethically troubling and far from ready to move into the clinic, like artificial wombs and lab-grown human organs.

BioTexCom’s current slate of services displays a clear disregard of responsible practice and ethical standards. The company is prominently marketing a risky and untested procedure – one that has been the subject of intense worldwide controversy – as a standard IVF “add-on.”

The procedure offered by BioTexCom is typically known as “ooplasmic transfer” or “cytoplasmic transfer.” It involves extracting cytoplasm (containing mitochondria) from a donor egg and injecting it into the intended mother’s egg along with sperm.

While BioTexCom refers to this technique in some places as “mitochondrial replacement therapy,” it is different from related experimental techniques that were developed so that a small number of women with a particular form of mitochondrial disease might be able to have children unaffected by the condition and genetically related to them. Those techniques, commonly called “mitochondrial replacement” or “mitochondrial transfer,” are more accurately described as “nuclear transfer” because they involve swapping the nucleus from the intended mother’s egg into the enucleated egg of a donor.

The rationale for using “cytoplasmic transfer” as a fertility treatment is that the decline in women’s fertility as they age is primarily due to less functional mitochondria. The addition of “healthy, functioning mitochondria” from a fertile woman’s donor egg is purported to increase the likelihood of conception and improve the quality of resulting embryos. But this is a hypothesis for which there is little to no evidence.

In fact, there has been remarkably little scientific or clinical research on cytoplasmic transfer. The first experiments were conducted at one clinic in the United States in the late 1990s, which reported 17 births before the technique was banned by the FDA, due to safety risks and concerns about “de facto germline modification.” (See further CGS coverage here and here.) The only follow-up on the health of these children includes sporadic media coverage and one published research study based on a mail-in survey filled out by the parents.

These procedures carry significant risks. The requirement for donor eggs to provide cytoplasm means more women will undergo ovarian stimulation and egg retrieval, which pose a range of little-studied short- and long-term risks. Serious risks specific to mitochondrial manipulation include “mitochondrial heteroplasmy,” referring to the presence in cells of mitochondria from two different sources—the mother’s egg and donor’s egg. A related concern is a mismatch between the donor's mitochondrial DNA and the DNA in the nucleus of the cell. The health effects of such mismatches are unknown.

None of this risk information is presented on the BioTexCom website. In fact, there are few details about precisely which technique they employ, and no scientific evidence supporting its use. In a promotional video, a doctor simplistically and misleadingly describes the procedure as simply swapping out the egg cell’s “Duracell battery.” Another video calls it a way to “completely rejuvenate” the oocytes of women over 40, thereby improving her chances of achieving pregnancy with her own eggs. It is advertised as an alternative to egg donation that allows parents to maintain a “100% genetic connection” to their offspring.

In an October 2019 promotional webinar, BioTexCom claims that their use of the technique has a “very high success rate” of 55% and promise potential customers “guaranteed results.” But there is a significant catch: success was defined solely as a pregnancy that reaches 12 weeks. At the time of the webinar, there had been no births following use of this technique, because the company had only been attempting it for around six months.

Nevertheless, they assured potential customers that the procedure is completely safe and would have no health effects whatsoever on babies conceived using this unproven technique. They repeatedly referred to the procedure as “innovative,” rather than calling it what it is: Uncontrolled and highly risky human experimentation.

Another reckless frontier in the fertility industry

Ukrainian regulations on heritable genetic modification are unclear, but it seems to be generally accepted that mitochondrial manipulation is not prohibited there.

In late 2016, another Ukrainian, Dr. Valery Zukin of Nadiya Clinic in Kyiv, announced he had overseen a birth arising from nuclear transfer used to “treat” infertility rather than to prevent the transmission of mitochondrial disease. This came just a few weeks after John Zhang’s announcement of the birth in Mexico (where he had transferred the embryo to avoid US regulations) of a baby conceived using this technique.  After the FDA stopped Zhang’s New York City-based Darwin Life Clinic from marketing nuclear transfer, Nadiya and Darwin Life formed a partnership to offer the procedure in Ukraine.

Tochilovsky of BioTexCom has said of the Ukrainian fertility industry, “The most important thing is to prohibit the intervention of law enforcement agencies into our work.”  But from abuses in surrogacy arrangements to the reckless use of risky technologies, there are many reasons to be concerned about this “Wild West” atmosphere and lack of enforceable regulations. It shouldn’t take another crisis to bring attention to these harms.