Gattaca at 20: Looking Back, Looking Ahead… 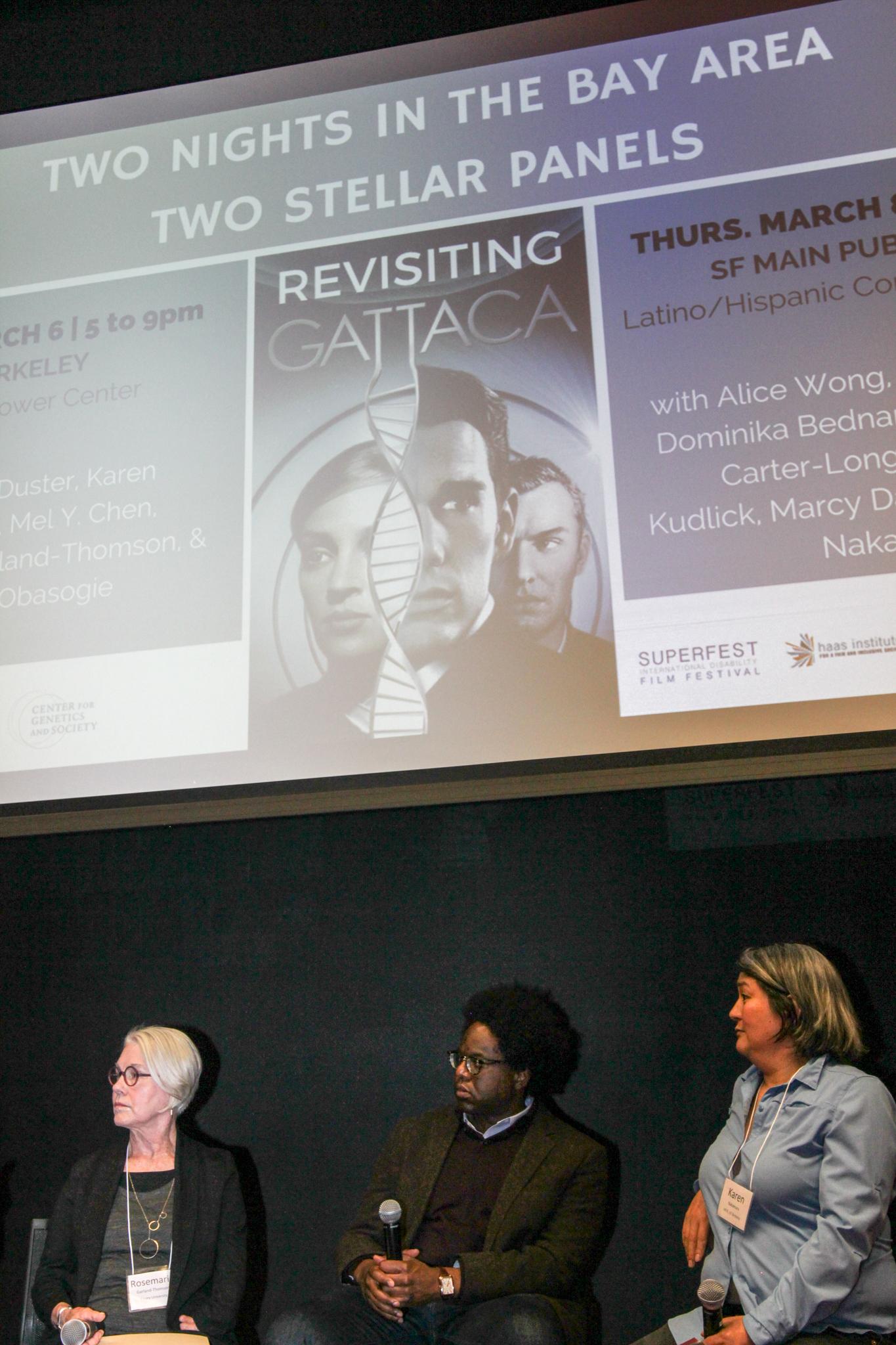 Twenty years after its release, the film Gattaca remains an enduring touchstone for discussions of human genetic technologies. Starring Ethan Hawke, Uma Thurman, and Jude Law, Gattaca presents a dystopian vision of the “not-too-distant future,” in which society is divided into genetic “haves” and “have-nots.” The “Valids,” conceived through IVF and selected for supposedly “superior” genetic profiles, monopolize high status careers and positions in society; the “In-Valids,” conceived without technology, are discriminated against and excluded, presumed to be “inferior” because they differ from a narrowly defined standard of genetic perfection. The story follows Vincent, an “In-Valid” seeking to defy this system and achieve his dream of space flight.

In the twenty intervening years, “Gattaca” has become shorthand for the potential that genetic engineering could be misused to produce an oppressively unequal and intolerant society.  Today, as technical developments raise anew the possibility of genetically modifying future generations, and a resurgence in overt racism and race science gathers steam, the film’s lessons are more relevant than ever.

So what can we learn from Gattaca about the possibilities of human genetic technologies for supporting the common good or intensifying and increasing social inequality? And how close is our present-day reality coming to its dystopian vision?

To explore these questions, the Center for Genetics and Society co-sponsored two Gattaca-centered public events in the Bay Area. Each included a screening of the film, followed by discussion among a panel of scholars and activists. Lively audiences engaged each panel with questions and comments about the film.

The Berkeley event on March 6 was co-sponsored by the Haas Institute for a Fair and Inclusive Society at UC Berkeley. Troy Duster (Chancellor’s Professor, UC Berkeley) offered opening remarks to frame the film, encouraging the audience to watch for how the story portrayed resistance: Are there any signs of increasing social consciousness, or does resistance only take place through individual acts? This theme was explored further in a wide-ranging panel discussion moderated by Karen Nakamura (UC Berkeley, Haas Institute). 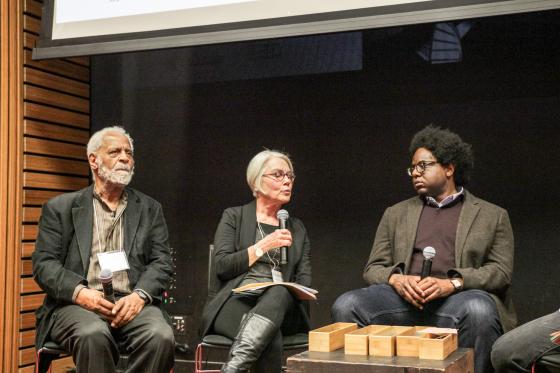 Rosemarie Garland-Thomson (Emory University) pointed out that to some extent, the genetic screening and selection depicted in the film is already happening in fertility clinics, fostering a market-driven “soft eugenics” focused on producing the “best possible” child. Troy Duster related the genetic selection technologies in the film to the popularization of DNA ancestry testing. The tests’ increased marketing and social acceptance, he said, permeates society with beliefs about the precise measurement of ancestry – and, by extension of race – that is actually all “smoke and mirrors.”

Osagie Obasogie (UC Berkeley, Haas Institute and CGS Senior Fellow) noted that a number of human genetic technologies share an underlying eugenic logic that associates human value with quantitative measurements, pointing out that this aspect of eugenics has only intensified in the decades since WWII. This is particularly true in recent years, as these quantitative measurements are being re-linked to deterministic understandings of genetics. Connecting this to current debates about CRISPR gene editing, he argued that technology doesn’t develop inevitably under its own direction, but rather is guided by political choices about how to use our time and resources. Gattaca gets us to think about whether this is the kind of society we want and what choices would make the world a better place for all citizens.

A reception following the film provided a chance for audience members and panelists to continue the conversation, while a team from the podcast Life of the Law interviewed attendees for an upcoming episode. 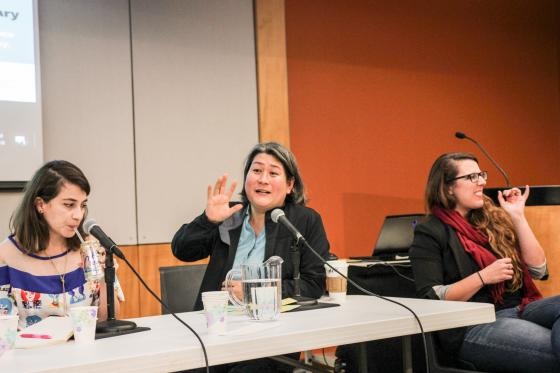 The second screening was held March 8 at the San Francisco Main Public Library and was co-sponsored by SFPL Access Services, Superfest International Disability Film Festival and the Haas Institute for a Fair and Inclusive Society. It examined Gattaca through an explicit disability justice lens. Catherine Kudlick (Paul K. Longmore Institute on Disability, San Francisco State University) introduced the film, highlighting its central themes of ableism and normalcy. Gattaca, she said, shows us the problematic nature of the dream of a world with no disability.

After the film, Karen Nakamura kicked off a lively discussion with the provocative question “What the heck kind of a disability film is this?!” Lawrence Carter-Long (Disability Rights Education and Defense Fund) and Dominika Bednarska (Performer/Activist) noted Gattaca’s ahead-of-its-time portrayal of non-apparent disabilities and hierarchies of disability; Catherine Kudlick and Sara Acevedo (California Institute of Integral Studies) joined them in exploring the ways the film challenges ableism but nevertheless reproduces familiar negative tropes of disability. Discussion returned several times to question whether the film’s explicit critique was undermined by its unimaginative portrayal of disability experience.

CGS’s Marcy Darnovsky discussed two lessons of the film, the first challenging genetic determinism, which is captured by the tag line “There’s no gene for the human spirit.” The second lesson makes clear that it’s not the supposed “success” of genetic engineering that produces Gattaca’s dystopian society; rather, the mere perception of genetically based “superior” capabilities is enough to produce extreme stratification. She drew out the implications for gene editing technologies and their potential to exacerbate already obscene levels of social inequality. 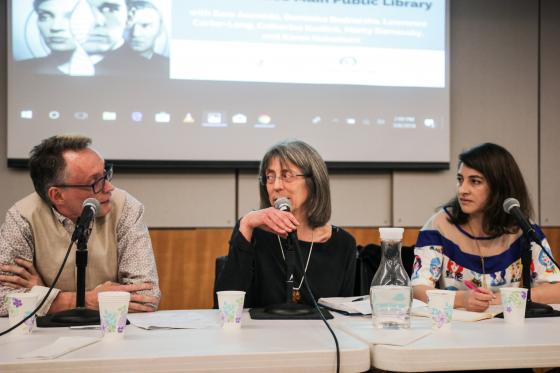 Both events used Gattaca to explore important questions about the social and political context in which human genetic technologies, including gene editing, are being developed and used. Given the pace of scientific research into human gene editing, there is an urgent need for extensive and meaningful public discussion about how these technologies should be developed, used, and regulated. These events drew on Gattaca as a compelling and accessible starting point for these discussions.