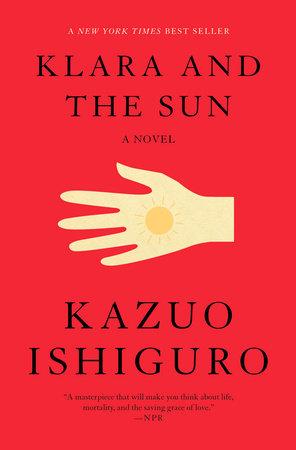 In Klara and the Sun, Nobel Prize-winning author Kazuo Ishiguro explores a future in which artificial intelligence and human genome editing have been fully integrated into society. The novel illustrates negative impacts at every level, from family dynamics and friendships to worker displacement and economic upheaval.

The story is told through the eyes of an “Artificial Friend” called Klara. She learns about the world through observation and interactions with customers at the shop where she is for sale, and is eventually brought home by Josie and her mom. Klara learns that Josie is very ill, and tries her best to keep the child company and assist in her recovery.

Rick is Josie’s neighbor and childhood friend. The two have grand dreams of growing up together and holding each other close through adulthood. As the novel progresses, we get the sense that this idealistic future will not pan out as expected for the two friends. Interrupting their deep connection is a difference in status: Josie is “lifted” and Rick is not. While we don’t immediately learn what being “lifted” entails, we understand that Josie’s illness is a side effect of this process. It also becomes clear that not being lifted makes Rick an outsider in Josie’s world, much like Klara.

In the second half of the book it is revealed that lifting is accomplished through a form of gene editing and that it is a very risky process. For Josie's older sister, this meant a disease so severe that she passed away at a young age. Consequently, Josie’s mom lives in a constant state of guilt and self-pity, with other parents walking on eggshells around her.

Children like Rick, whose parents refuse or can’t afford lifting, are essentially ostracized from society. Few, if any, opportunities exist for unlifted children. Rick’s mom, in a frustrated discussion about her child’s uncertain future, expresses that

“If one child has more ability than another, then it’s only right the brighter one gets the opportunities… I accept that. But what I won’t accept is that Rick can’t have a decent life. I refuse to accept this world has become so cruel.” (233).

Ishiguro’s novel dramatizes the wrenching dilemmas parents would face in a world where genetic enhancements are necessary to securing a good life. It reveals not only the devastating harms to the child, but also the family’s trauma after making such a consequential decision. Initially, the obscured source of Josie’s illness and the emotional tension in her family left me scratching my head. After it became clear, the details of Josie's family dynamics and other interpersonal relationships spoke much louder.

Klara and the Sun is not Ishiguro’s first novel (nor his last, probably) with a dystopian science fiction basis. Never Let Me Go, published in 2005, tells the story of cloned children raised to be organ donors. In a 2016 interview with The Guardian, Ishiguro discussed his concerns about the effects of unregulated technology on core social values. He emphasized the need for citizens to be more actively engaged with developments in math and science. This is especially necessary when advances in artificial intelligence and gene editing are often hidden away in private companies rather than openly monitored in universities or government-funded programs.

In his 2017 Nobel Prize lecture, Ishiguro reflects on ever-growing global inequalities, whether caused by warfare or rampant racism. He laments that though the world has modernized, age-old disparities driven by greed and ignorance persist in updated packaging:

And around the corner – or have we already turned this corner? – lie the challenges posed by stunning breakthroughs in science, technology and medicine. New genetic technologies – such as the gene-editing technique CRISPR – and advances in Artificial Intelligence and robotics will bring us amazing, life-saving benefits, but may also create savage meritocracies that resemble apartheid, and massive unemployment, including to those in the current professional elites.

Ishiguro’s concerns about meritocracies, unemployment, and their consequences for human relationships are intricately woven through Klara and the Sun. The novel illustrates how harms to an individual might ripple through families, then communities – making an indirect case for stricter regulations regarding human genome editing.

Similar concerns motivate two sets of reports recently published by the World Health Organization: one on the use of artificial intelligence in healthcare and another on human genome editing. The ethical and governance guidelines laid out in the reports are underpinned by aspirational principles of equity, safety, and accountability. While the WHO’s focus on these emerging technologies acknowledges their potential harms to individuals and society, neither report advocates hard restrictions on research or use.

Recent revelations of present-day eugenic abuses, like forced sterilizations in California prisons and the Czech Republic, highlight the need to be proactive in preventing a re-emergence of new, “better-marketed” (in Ishiguro’s words) forms of eugenics. While the warning in Klara and the Sun is not so stark, Ishiguro depicts a world where new technologies exacerbate existing disparities in society.

Novels, movies, theater, and other media can provide an entry point into much needed public discussions about building an inclusive future. Klara and the Sun encourages us to consider a future not too unlike our present and begin to ask some difficult questions. What good can this technology really do? Is it worth leaving people like Josie, Rick, and their families behind?