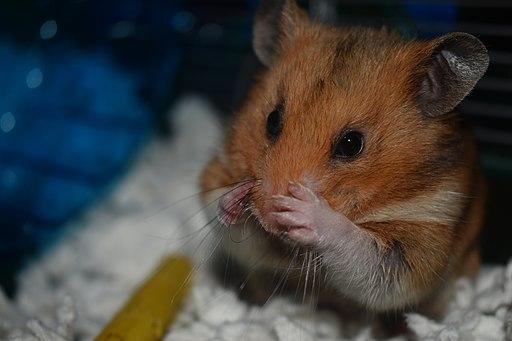 The high-profile debates over gene editing, especially with Crispr-Cas9, mostly focus on its use for humans, whether as gene therapy or heritable modification. Proponents routinely stress that applications must reflect “broad societal consensus” and resolution of “the relevant safety and efficacy issues,” as spelled out in the report on the 2015 [First] International Summit on Human Gene Editing. Meanwhile, experiments on animals continue apace, and some of the results are certainly both unexpected and unlikely to prove popular.

The title of this post is a direct quote from the Regents’ Professor of Neuroscience at Georgia State, as reported in the university’s press release about research he and colleagues had conducted. Their article was published in PNAS on May 5, 2022, under the title:

The popular press (1, 2, 3) translated this into variations on a much more boisterous theme, which can be summarized as:

Hamsters are generally seen as cute and harmless potential pets, so they do attract sympathetic headlines when turned into monsters. The gene editing was in fact successful, in that it knocked out a specific key signaling mechanism in the brain circuit that increases social communication and aggression. The result, however, underlines the difficulty in predicting what such alterations might actually bring about. The experiment was expected to decrease aggression; what happened was the opposite, hence the “paradoxical changes” observed. The finding was a surprise, and scientifically interesting, as Tom Philpott pointed out in Mother Jones while calling for restraint in the application of gene editing technology. After all, even if it does work, in the sense of making the change we expect, if the results of that change are unpredictable, should we really use it at all?

Cats attract love and attention on an entirely different scale than hamsters, and a significant number of humans are allergic to these charming creatures. So of course people are trying to develop hypoallergenic cats. Just as predictably, a detailed peer-reviewed scientific paper establishing a possible route for gene editing provoked a minor storm of articles, from Gizmodo to Smithsonian Magazine and many more. Most refer, not unreasonably, to “first step” or “progress” or “one day.” Even the relevant page on the website of Indoor Biotechnologies (inbio), which is behind the effort, is appropriately low-key. The tentative reaction is some small comfort. Whether the process will ultimately work remains to be seen.

Research continues with many other species, some of them much less attractive to most people. Scientists in Kyoto and Barcelona have developed a technique for editing the genes of cockroaches that might have wider application. The paper published in Cell Reports Methods describes a new “simple and accessible method for insect gene editing” and The Scientist summarized it:

Injecting Cockroaches with CRISPR Gene Edits Their Offspring
A new method has allowed researchers to conduct the first gene knock-out and knock-in edits on cockroaches and may extend to many other insects.

The innovation here is a way of getting around the fact that editing cockroach embryos is essentially impossible because of the tough cases that surround them. Previous attempts at a similar process with spiders had a success rate of about 1 in 200; the new technique “achieved an efficiency of up to 21.8 percent in cockroaches and over 70 percent in the red flour beetle Tribolium castaneum.” What the scientists hope to discover with this is the function of genes about which they still know nothing.

Meanwhile, GM Watch, on May 25, analyzed in depth another application of gene editing, this time on the farm:

No, the chickens would not peck their new-laid eggs to pieces; the males would inherit a lethality gene that causes them to die before ever hatching. If it works. There remain concerns about the effects on the mother hens or other organisms after the eggs die. Basically, the process would be dumping poison into the environment. If it gets beyond the test-tube stage. A European patent was filed for this in March 2020 and approved in January 2022.

There simultaneously seems to be a public relations campaign under way “to create female-only and male-only litters of mice.” This, it is claimed, would “spare animal suffering” because it would “prevent the destruction of hundreds of thousands of unwanted mice used in research” and “could also prevent the slaughter of millions of male chickens in the UK, which are culled because they don't lay eggs.” If it works.

And, of course, for this and all the other gene-editing technologies, if the government will allow it and the public will accept it.

All this is in addition to genetically modifying pigs for transplantable organs:

“Playing God With Pork: Xenotransplantation Could Save Lives And Money—But Is It Ethical?

The Nuffield Council on Bioethics is one of the few institutions to take such questions seriously. They published a book-length report last December, together with a short version and a summary, which “examines the social and ethical issues raised by the potential use of genome editing technologies in farmed animal breeding.” Certainly the social and ethical issues have never received the attention they deserve. Especially given the hamster evidence that, at least in some circumstances, gene editing is not predictable. It may “work” in that genes are altered as intended, and yet not produce the hoped-for results.

By the way, who could forget the perennial lure of de-extinction? Just last week, a Washington Post headline was:

Scientists try to bring Australian ‘tiger’ back from extinction

They were never tigers of course, the species was a Thylacine, sometimes also called a Tasmanian wolf, and the work is being done at the cleverly named Thylacine Integrated Genomic Restoration Research (TIGRR) Lab., funded by a recent A$5 million donation (about $3.6 million in US currency) from the Wilson Family Trust. Will it work? Well, they may eventually produce some kind of creature resembling the extinct animal. To my knowledge, none of the efforts made over the last couple of decades — the passenger pigeon, the mammoth, the auroch and others — have succeeded in anything but entertaining a number of scientists for a while.

Is this what we want? Fake mammals, aggressive rodents, cockroaches edited to outlive Keith Richards, and unpredictable editing of life? Isn’t it time for a major rethink?