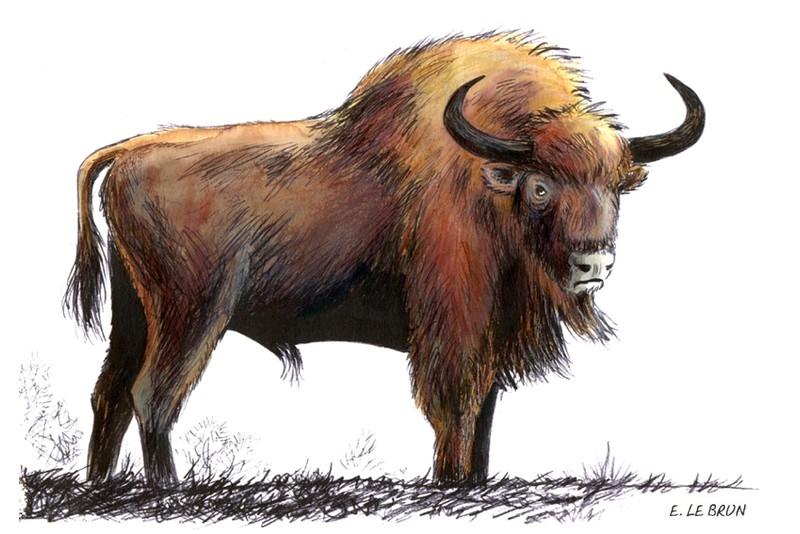 The idea of reviving extinct species just won't go away. Genomics is being used in attempts to revive both the aurochs (as painted some 30,000 years ago in Lascaux) and a species of Galápagos tortoise.

The last known aurochs, a huge ox that weighed two tons but is the ancestor of domesticated cattle, died in Poland in 1627. Lately, however, an Italian group has analyzed aurochs DNA from bones and is trying to recreate the species through back-breeding. They have already crossed three different breeds from different parts of Europe, and intend to analyze the calves and continue breeding until they can produce "animals nearly identical to aurochs." Donato Matassino of the Consortium for Experimentation, Dissemination and Application of Innovative Biotechnologies (ConSDABI) in Benevento, Italy, is quoted (translated here) as saying:

We will rebuild, step by step, the genetic combination of primitive ox. This is a first crossing of a series. This newborn animal will give us material to use in future crosses. It will take some years to reach the closest animal ancestor of the ox. We may also use different techniques such as artificial insemination, embryo production in vitro and, eventually, cloning.

Another team is also reported to be currently working on resuscitating the aurochs. (Previous attempts were made in the 19th and 20th centuries but obviously without the benefit of genetic technologies.) Matassino's justification for reviving the aurochs is that "today, our focus is sustainability and bigger animals will be a help with that." There may, however, be issues with "an animal which boasts a size and temper akin to a tetchy rhinoceros."

Meanwhile, scientists at Yale have been analyzing the DNA of 156 tortoises living in captivity, and samples from remains of the now-extinct Chelonoidis elephantopus, which used to live on Floreana Island in the Galápagos -- and found that it's not quite extinct after all. They identified nine individuals as descendants, probably grandchildren, one of whom is a male "with high assignment probability to C. elephantopus based on microsatellite genotypic data [and] a 'Floreana-like' mitochondrial DNA haplotype."

Breeding tortoises takes a while, but in a century or so they hope to produce a tortoise genetically identical to the species generally considered extinct. Says Gisella Caccone, "Theoretically, we can rescue a species that has gone extinct. Our lab calls it the Lazarus project. ... We won't be around to see it, but it can be done."

Neither of these projects seems to involve genetic modification, though the aurochs re-creation may involve cloning eventually. Both of them, however, seem to encourage a purely genetic view of life, and species, while stretching the definition of species in a way that contradicts the supposed certainty of genetic analysis. Is "nearly identical" close enough? Is this, in any case, a useful way to proceed? Or are these examples of the maxim that to those with a hammer, all problems look like nails?