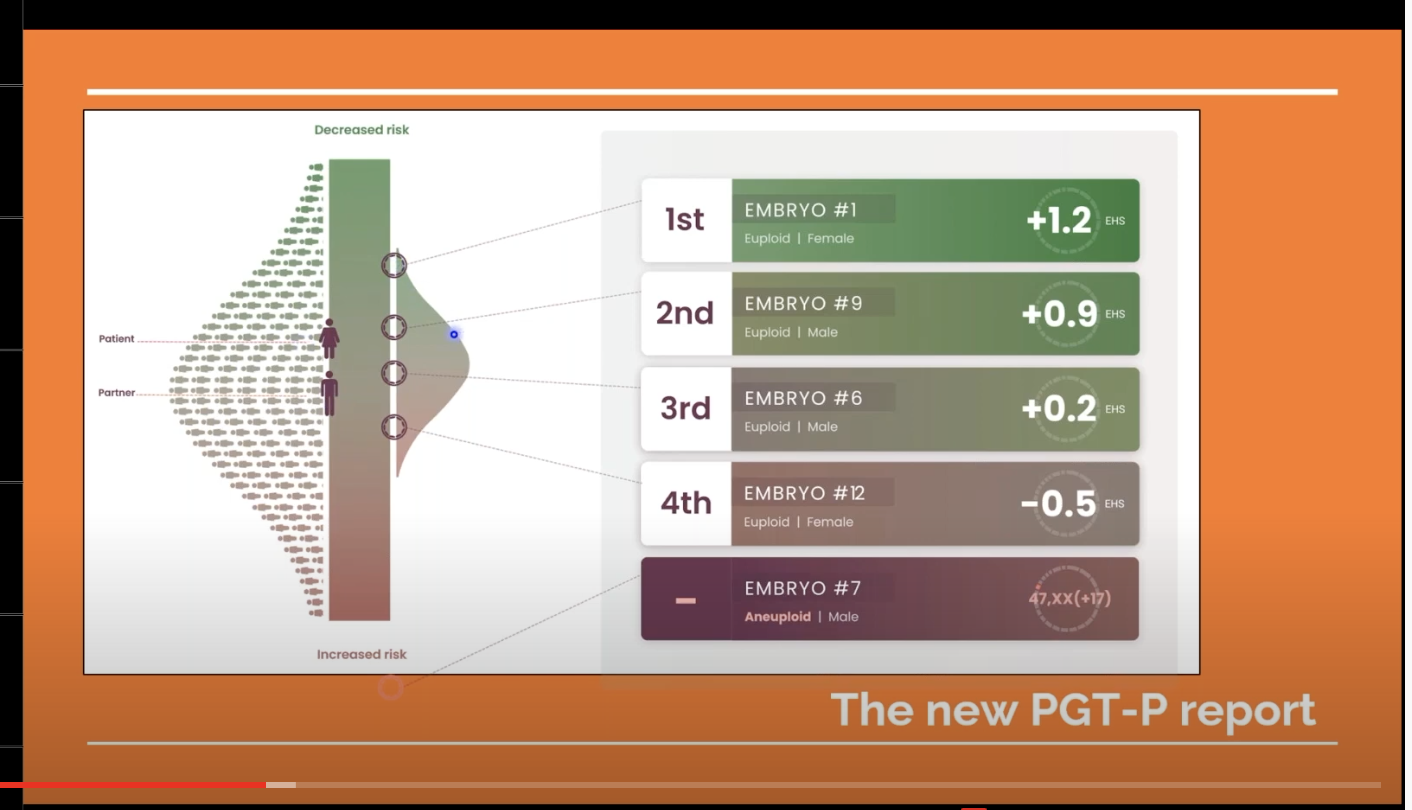 The first child acknowledged to have been selected as an embryo on the basis of its “polygenic risk score” is now 16 months old. Her parents, at least one of whom is apparently a committed transhumanist, used IVF together with analysis by a company called Genomic Prediction to select one embryo for implantation from among four as having “the best genetic odds of avoiding heart disease, diabetes and cancer in adulthood.” This is a commercial move that is essentially unregulated, scientifically and ethically controversial, and a considerable reach by the assisted-reproduction industry in the direction of techno-eugenics.

There are important differences between this technology and the more established embryo-selection procedure of pre-implantation genetic diagnosis (PGD). A polygenic risk score (PRS) is a single number derived from an algorithm that summarizes the estimated effect of hundreds to millions of genetic variants on an individual’s risk of a particular condition or trait. PRS analysis may suggest, for instance, that one particular embryo will develop into an adult who has a lower chance of heart disease than most people. But the prediction is far from certain and, as is well known, diet and exercise affect that risk considerably. Significantly, that particular score says nothing at all about many other health-related risks that may be associated with specific combinations of multiple genes.

PGD is much more specific. It is generally used to avoid the relatively rare medical conditions associated with a change in a single gene (monogenic disorders) and is typically carried out when parents know they risk transmitting a serious disease. PGD allows these parents to select and implant an embryos that does not carry the disease-causing variant. It has been widely (and often controversially) used since the 1990s by parents who want to prevent the birth of children with chromosomal or monogenic conditions that vary widely in severity, including Down syndrome, Tay-Sachs disease, cystic fibrosis, sickle cell, Huntington’s chorea, and Cooley’s anemia. It can also be used for sex selection, by choosing only embryos that have or do not have a Y-chromosome. Other concerns about PGD have been raised by disability rights activists, who argue that it promotes discrimination against the sick or disabled and essentially devalues the lives of people who might not have been chosen.

The polygenic risk algorithms used for selection in this case were developed and the analysis was done by a company called Genomic Prediction, aka Lifeview. As we noted back in 2019, the company was then already claiming that: “[e]mbryos have been chosen to reduce disease risk using pre-implantation genetic testing for polygenic traits, and this has resulted in pregnancy.” That would be (or include) the baby born in May 2020, whose existence was not widely publicized until Carey Goldberg wrote about her in Bloomberg earlier this month (September 17), though Slate had the story in August.

Genomic Prediction was co-founded by the notorious Stephen Hsu, about whom we have written many times (2011, 2014, 2018, 2019, 2020), going back even before his involvement with the “Genius Genes” program at BGI in China. Hsu has always wanted to select embryos for intelligence, and the company initially offered to select against low IQ but not for high IQ. They presented that as a principled stand against eugenics, but in fact it was fairly obviously both a marketing decision and a hedge against failure — if the embryos they considered low-IQ were never born, no IQ scores would ever be available, and the success of their process could never be disproved.

Rafal Smigrodzki, the father of Genomic Prediction’s first PRS baby, says he learned about the company from Antonio Regalado’s 2017 story in Technology Review, “Eugenics 2.0,” and was inspired to get in touch. A little digging shows that, at least in the early 2000s (pdf, p. 6), Smigrodzki was a member of Alcor, the cryonics company devoted to “preserving life by pausing the dying process using subfreezing temperatures with the intent of restoring good health with medical technology in the future.” He was also credited for useful comments by Nick Bostrom in the 2003 Transhumanist FAQ and contributed to a 2013 SENS meeting on Rejuvenation Research. In other words, he’s long been interested in unlikely approaches to avoiding death and otherwise escaping the human condition.

Smigrodzki talks about the process of selecting the embryo that became his daughter Aurea in a Genomic Prediction video, starting at 23:50. One detail (revealed at about 29:00) is that the eggs used to create the batch of embryos were supplied by a donor. The video features, among others, Elizabeth Carr, who was the first IVF baby born in the US; and Julian Savulescu, the transhumanist philosopher and advocate of human bio-enchancement.

The four finalist embryos had been picked from 16 generated and six analyzed, and Smigrodzki says he personally made the decision, based primarily on avoiding cardiovascular disease. At 26:17 he shows a report analyzing the embryo’s risk potential, and finally at 28:15, Aurea. Smigrodzki regards polygenic embryo screening technology as revolutionary, and believes it has the potential to reduce disease by 50% — “this is bigger than antibiotics” — with the potential to “have a bigger impact on human health by more than vaccines and sanitation” (31:15) and “compounding benefits” over generations.

But many experts are decidedly skeptical of the science underlying PRS for embryo selection, and troubled by the social and ethical implications. In July, the New England Journal of Medicine published an analysis by thirteen scholars titled “Problems with Using Polygenic Scores to Select Embryos” that explicitly calls for “a society-wide conversation about this technology.” (The article is paywalled but free with registration, or a summary is available.) Scientific American followed up with this:

A New Era of Designer Babies May Be Based on Overhyped Science
Genetic testing with IVF is being marketed as a means to choose a healthy embryo, despite questions about the soundness of the technology

Slate also ran a skeptical analysis: “A new kind of embryo genetics screening makes big promises on little evidence: And yet you can buy the tests.” The article includes the cost factor for customers (though the word “profit” does not explicitly occur) and notes a recent study published in Nature Communications that demonstrates that the polygenic scores for people of European ancestry seem not to be the same as those for people from other regions of the world, whose genomes have been less frequently analyzed. Even when no embryos are involved, the science behind polygenic risk scores has quite a ways to go.

Moreover, the serious social and ethical concerns remain even if the science were to become perfect (which is by no means certain). We are not just “teetering on the edge of eugenics,” we’re mid-leap. These tests are being sold as a way to decide who should be born based on “better” and “worse” genes — now dressed up in polygenic scores. And while the sales are being presented as individual choices for prospective parents rather than government policies, these choices will inevitably be influenced by marketing and by social context.

Selecting for so-called “good” traits like high IQ is very likely to increase inequality, but not because it will produce super-smart children for the wealthy. Families that invest their money, time, and hopes in this kind of screening and selection will have children they believe are genetically superior, and those children will be treated as superior by their parents, caregivers, educators, etc. The results of the educational advantages these families are able to provide their children will now be understood as coming from their “superior” genes, reinforcing ideas about genetic determinism.

Assisted reproduction services are not cheap, either financially or in the usually hidden (and forgotten) cost to women’s health. They require that women take on the understudied health risks of egg retrieval and IVF. In some cases, those risks are outsourced to surrogates, and that may increase: If polygenic embryo screening became widespread, it could lead couples to use IVF solely to access it. The financial costs are also not trivial. A recent survey suggests that $15–20,000 is common, but extreme cases can reach $150,000. Insurance can help, but is rarely available to those who most need it. Genomic Prediction adds a $1000 set-up fee plus $400 per embryo tested. For the rich, this is insignificant; for most Americans $20–25,000 represents a major or impossible expense. But it’s one that some middle-class parents may feel pressure to make.

Essentially, this process is leading to entrenching socioeconomic advantage in claims about biology, contributing to further discrimination. The next step would presumably be editing the embryos; if this process becomes part of the standard menu of IVF "add-ons," it is likely to make further “enhancement” seem more acceptable. There is currently much debate about heritable human genetic engineering; the issues around polygenic selection should be discussed just as seriously.

The need for discussion and deliberation is now clearly urgent. So is the need for regulation and oversight.