In a wide-ranging conversation moderated by Pat Thomas of the Organic Consumers Association, the panel grappled with an ambitious agenda: to explore the limitations of “techno-utopianism,” how social movements can redirect science and technology toward a just and sustainable future, and how we can preserve our humanity – and diversity – in a genetically engineered age.

“Climate Crisis, Designer Babies and Pandemics” was hosted by Organic Consumers Association , and co-sponsored by Alliance for Humane Biotechnology, Center for Genetics and Society, Friends of the Earth, and International Center for Technology Assessment.

A recording of the September 22, 2020 event can also be viewed on Facebook or YouTube. A complete transcript (very lightly edited) is available as a pdf. The following quotes give a flavor of the conversation:

PT: Joining the dots between the multiple challenges that we face, challenges that could seem at face value unrelated, is never easy; the natural human inclination is to break big problems down into component parts and pick one. And yet it is impossible to separate climate change from human health and social justice and race and gender issues and poverty and power hierarchies.

BM: Working together is also the precisely opposite paradigm to the idea that the way out of our dilemma is to engineer our children’s lives that they’re so intelligent or perfect or some such that they don’t ever have any need for cooperation.

MD: The acceleration of the technology is out in front of our boundary making. … What are our responsibilities around setting boundaries around that technology, particularly to protect vulnerable populations, women and women’s reproductive agency?

SN: We’re looking at very complex systems and biological systems, and the idea of engineering them is a misconception because you can only engineer something that you understand the principles of, and as scientists we don’t really fully understand how biological systems — organisms — work so the idea of kind of plugging in genes and hoping for the best is something that can be quite disastrous.

BM: The most famous quote of 2020 came tragically from George Floyd. As he was being murdered, he said I can’t breathe. And you can’t really breathe because there’s a cop kneeling on your neck, because your community is stifled by police brutality, but you also can’t breathe because the same communities are far more likely to host, say, coal-fired power plants. Asthma rates are three times as high among black Americans as white Americans, it doesn’t have the slightest thing to do with genetic disposition to asthma, it has to do with where the hell you live.

SN: Galton, as Marsha mentioned, was one of the founders of a new ideology that tried to place in nature the idea that that people in the upper classes were somehow superior to people in the lower classes. Whether their status in society was as slaves or workers, the people on top were better biologically.

BM: When one confronts this possibility of a future of genetically modified human beings, we’re lucky in that there is a fairly obvious line in the sand to draw, under the germline. [And] there isn’t yet in existence the enormous industry that’s making huge amounts of money from doing this. … For once we actually have a potential crisis that we understood far enough in advance to be able to say, let’s just don’t go there and we can cross this one thing off our list.

MD: Let’s have an honest conversation about a couple of major things. One, what is the role of pride, ego, hubris in our decisions? Two, to what extent have we channeled millions of dollars of public funds into private endeavors, but not asked those successful endeavors to return that seed capital to the public fund to make those funds available for new innovations? 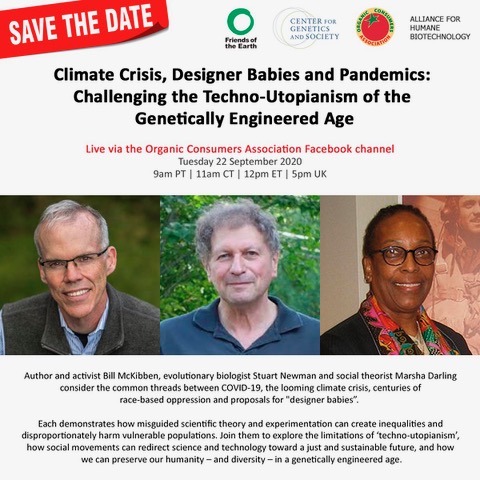