The Ongoing Tale About "The Handmaid's Tale" 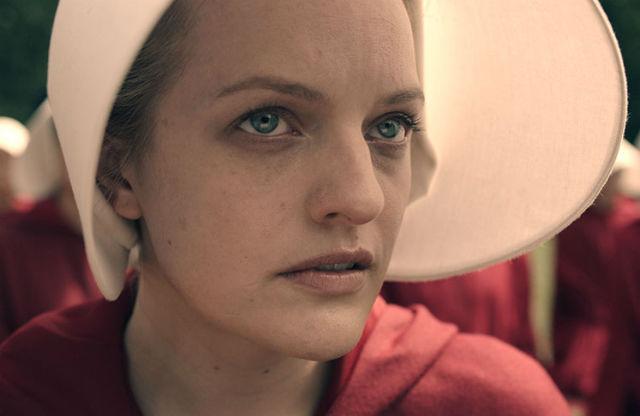 This post was originally published on Our Bodies, Ourselves  and has been republished with permission.

With the wild popularity of the new TV series “The Handmaid’s Tale,” surrogacy is back in the limelight. The Hulu show, based on the cautionary novel of the same name by Margaret Atwood, follows Offred, a woman who is isolated and confined for the sole purpose of bearing children for the people who keep her. This is fate for all the handmaids in the fictitious Republic of Gilead, where their value depends on the viability of their ovaries.

While Atwood’s handmaids are not called surrogates, some disturbing parallels exist between their experiences and the realities of modern-day surrogacy.

A recent article in Women’s Health, Six Facts That Every Woman Should Know About Surrogacy, suggests that Atwood’s “totalitarian premise is far from a realistic portrayal” of the actual process, yet her premonitions echo in today’s market-driven premiums on bodies that can provide high-value “products.” Unfortunately, the proffered facts, and much other information on surrogacy, paint a fairly uncomplicated picture about an arrangement that is, in reality, fairly complicated. So, here are some additional facts to help set the record straight.

Surrogacy — where a surrogate (or gestational mother) carries a pregnancy for someone else (intended parents), often in exchange for money — is an important option for many. This includes people dealing with infertility and other health problems that affect the ability to get pregnant and those facing legal barriers to parenting due to their sexual orientation and marital status. Yet the practice often raises complicated ethical questions, regardless of whether arrangements are between gestational mothers and intended parents living in the same country or in different countries. The vast majority fall in the latter category, with intended parents paying complete strangers in other countries to carry and birth children. These international and commercial arrangements cannot be ignored in any conversation about surrogacy.

International commercial surrogacy arrangements are generally mediated by concierge-style agencies that cater to every aspect of assembling the global baby. Some well known agencies include Surrogacy Beyond Borders, The Fertility Institutes, and the now defunct Planet Hospital. In these commercial agreements between strangers in different countries that rarely speak the same language, gestational mothers are akin to Atwood’s handmaids – outsourced, outside, and out of sight. There are other similarities. Gestational mothers are often separated from their own families — including their children — during the pregnancy and are required to stay in dormitories, constantly monitored and unable to leave at will.

Gestational surrogacy is, no doubt, the more popular option. Traditional surrogacy, however, is safer, as it only involves using the low-intervention technique of inserting the sperm into the woman who will carry the pregnancy. She is not subjected to the aggressive cycles of hormone treatments and embryo transfers that are required in gestational surrogacy to artificially prepare a woman’s body to carry and birth a child. There are other health risks as well. Medically unnecessary cesarean sections are routinely performed, despite the fact that vaginal births are generally safer, and multiple embryos transfers, often performed to increase the likelihood of pregnancy, expose gestational mothers and children to the risks associated with multiple births.

A point of departure from the handmaids of Gilead involves the issue of contracts. (Offred was not bound by one, though she did have to prove her fertility just the same as her real life counterparts.) While it is advisable to understand the laws that shape contracts, and craft  agreements that protect everyone, these laudable goals are rarely met.

In international commercial surrogacy, contracts are sometimes written in languages that gestational mothers cannot read — which means they are unable to consent to the conditions of their participation — and the arrangement is designed to ensure they have no access to independent legal advice. Intended parents are not spared either, with many examples of people being duped by agencies that make false promises in exchange for big bucks. And as international commercial surrogacy sneaks across many porous borders and regulation varies between countries, the children also often fall between the cracks, affected by arbitrary and ever-changing rules related to legal parentage and citizenship.

There are lots of grays on the global canvas of surrogacy, with disturbing parallels between Atwood’s fiction and reality. Fortunately, researchers, activists, and journalists around the world are documenting issues, including those listed here, and trying to change the unsound practices that characterize these arrangements. Their work, and more, is available at the new website Surrogacy360, launched in December by Our Bodies Ourselves and the Center for Genetics and Society. This body of literature, along with (many) a page out of Atwood’s book, will hold us in good stead as surrogacy continues to leap across borders, challenge thinking on issues of class and race, and define the human tale going forward.