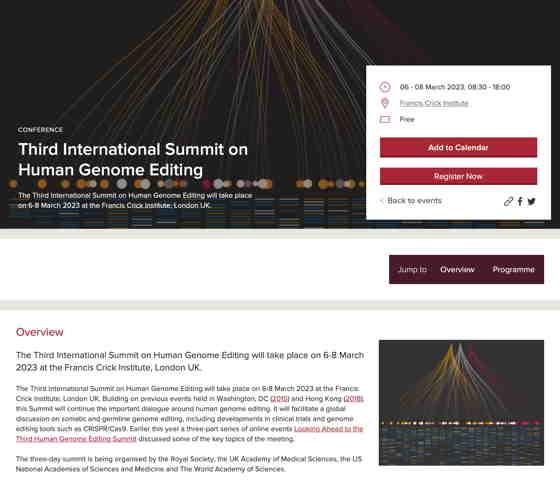 The UK Royal Society has published an overview and schedule for the Third International Summit on Human Genome Editing, which will take place on 6–8 March 2023 at the Francis Crick Institute in London. The upcoming event is part of a series of major convenings about human genome editing that has been organized by the national science academies of the US and the UK. Regrettably, this event, like its predecessors, appears to be mostly an opportunity for advocacy in favor of adopting heritable genome editing, disguised as dialogue.

The first, in 2015, took place shortly after the initial report of using CRISPR/Cas9 to edit viable human embryos. The second, in 2018, began with the bombshell announcement that “CRISPR babies” had been born; it ended with a much-noted and very odd pivot by the Summit planning committee chair from condemnation of the reckless experiment to a proclamation that it was “time to define a rigorous, responsible translational pathway” to clinical trials of heritable genome editing.

Some gaps remain in the schedule for the March meeting, and some speakers and moderators are still to be named. But there is enough detail to draw tentative conclusions about the direction the event will take, and they are a mixed bag at best.

This Summit was originally scheduled for 2022, and the schedule for that version remains online (pdf). The delay was, of course, Covid-related; as a place-holder the Royal Society presented a three-part series of online events, Looking Ahead to the 2023 Third International Summit on Human Genome Editing, which were not well promoted or attended. The videos are still available.

Comparison of the 2022 and 2023 schedules reveals some interesting adjustments. One involves the Center for Genetics and Society: CGS’s associate director Katie Hasson is no longer on the program at the Summit, as she was informed just 48 hours before it was publicly announced. She had been scheduled to speak on a panel titled "Regulation and Policy Approaches for Heritable Editing" about the globally widespread policy agreement, already adopted by 70 countries, that heritable genome editing should be prohibited. It's unclear whether or how the current program will acknowledge or consider this.

Hasson’s disinvitation does put her in good company. Half of the 74 other speakers from the original agenda have been removed, some of them world-famous (Jennifer Doudna, for one). They have been replaced by 21 others, many of them smart choices. The new presenters and discussants include prominent scientists such as David Liu and Fyodor Urnov; distinguished academics including Sheila Jasanoff of Harvard University’s John F. Kennedy School of Government and the Global Observatory for Genome Editing; and civil society advocate Sarojini Nadimpally, a leading feminist bioethicist in India and co-founder of Sama, a resource group for women and health.

The agenda has been tightened, which seems sensible. But the new structure and focus are problematic. Indeed, the event could be seen as having been designed to lead participants from considering somatic editing into a discussion of how – not whether – to implement heritable human genome editing.

Here’s one example. The 2022 schedule’s first substantive panel, after an introduction to the history of the summits, was “Scientific, Historical and Ethical Context of Human Genome Editing.” Now two sessions are scheduled for the same time slot: “Regulation in China following the 2018 clinical use of heritable human genome editing” followed by “Hopes and fears for human genome editing.” The “hopes and fears” presumably could apply to both somatic and heritable genome editing, but the context is already set by the discussion of the criminal efforts of He Jiankui.

Some of the later panels are clearly about somatic editing, others clearly about heritable alterations, but some seem ambiguous, which could be a problem. Healing people is worthy of support in principle (though so far gene therapy is remarkably expensive at best) but heritable manipulations are widely opposed and legally prohibited some 70 countries. Blurring the difference between somatic and reproductive applications of genetic alterations – “between making people better and making better people,” to quote Françoise Baylis – is extremely problematic yet quite common, especially in media coverage and opinion polling. It would be unfortunate if the Summit contributed to muddying the waters.

The closing day has five sessions before concluding remarks by Robin Lovell-Badge, chair of the Summit planning committee, who is widely known as an advocate of moving forward with heritable genome editing:

It’s unclear whether the first and last of these refer to somatic genome editing, heritable genome editing, or both; the other three are clearly devoted to heritable manipulations. And note the allocation of time: the editing of embryos and gametes will be discussed for nearly three times as long as civil society and cultural variations put together; policies and principles, which follow the three and a half hours devoted to heritable editing, are given less than an hour.

The schedule and sequence of this upcoming Summit leave the impression that it aims to facilitate the adoption of human heritable genome editing. This should not be surprising, given the subtexts – and to some extent, the explicit texts – of the two previous Summits. Each of those led to a formal publication from the US National Academies and the UK Royal Society that moved toward defining the “translational pathway” to clinical trials of heritable human genome editing.

The meeting next March seems likely to be a continuation of efforts by certain scientists and other advocates to smooth the process of green-lighting heritable genome editing. But perhaps civil society in general and governments in particular will come to see where the extremists are trying to take us. And stop them.