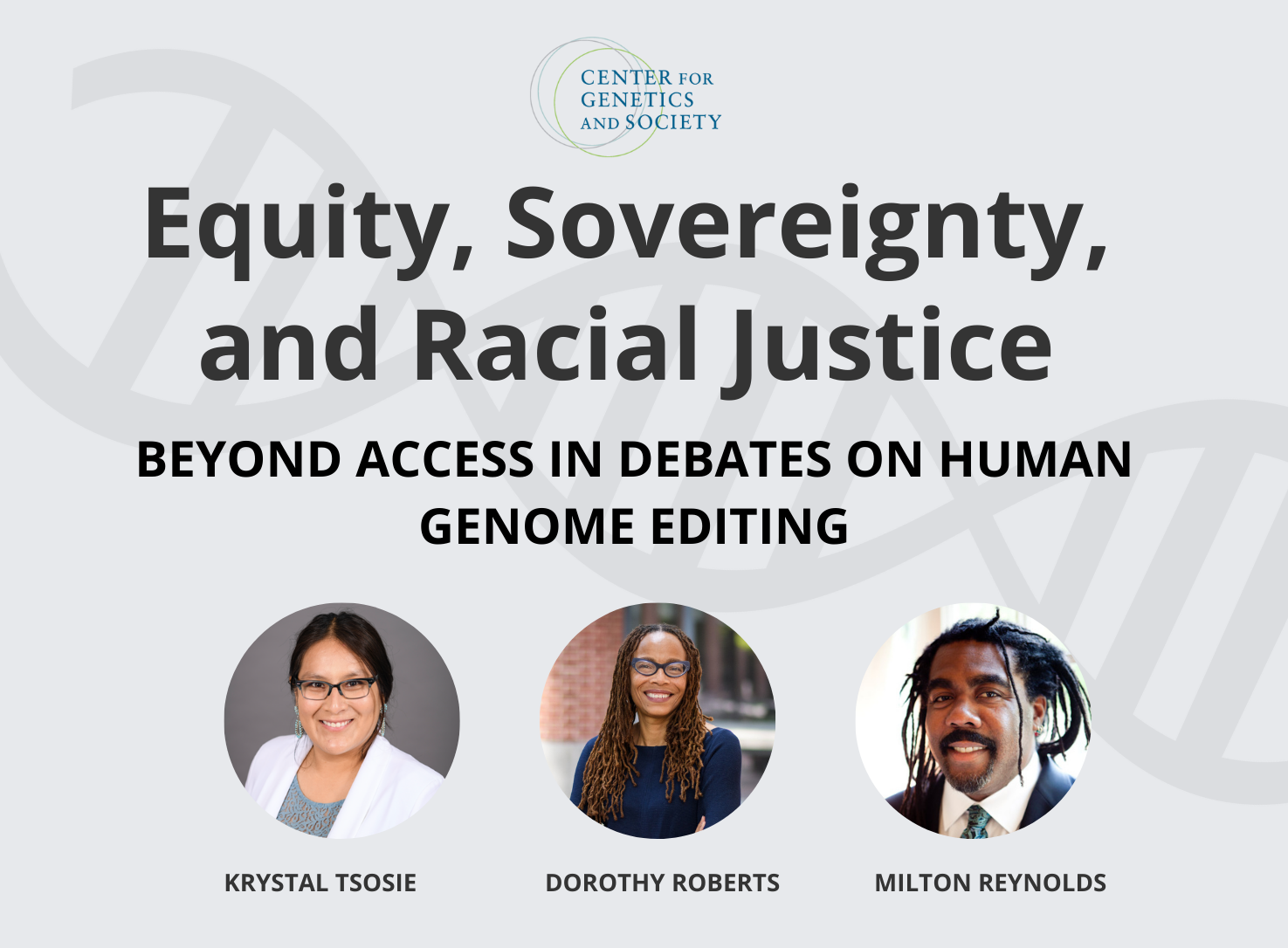 A stellar panel discussed how to bring a broader and more critical understanding of equity into current societal and public policy conversations about heritable genome editing. “Equity, Sovereignty, and Racial Justice: Beyond Access in Debates on Human Genome Editing” was hosted by the Center for Genetics and Society and moderated by CGS's associate director Katie Hasson. The roundtable event on September 14 brought together ​​Indigenous geneticist-bioethicist Krystal Tsosie, reproductive justice scholar and advocate Dorothy Roberts, and educator and activist Milton Reynolds to discuss heritable genome editing in relation to the legacies of eugenics, ​​Indigenous Sovereignty, and the urgent need for voices and perspectives grounded in social justice and human rights. You can find the full video, transcript, and information on the panelists here.

And given the likelihood that heritable genome editing would intensify existing inequalities, should it have any place in the world we're trying to build? With consequential decisions regarding the future of heritable human genome editing fast approaching, these questions are urgent. In March 2023, the US and UK national science academies are convening the Third International Summit on Human Genome Editing, and the UK may be beginning to take steps toward legalizing reproductive gene editing. However, these policy actions have not included the perspectives and input of civil society on the social justice implications of human genome editing.

To understand the consequences of human genome editing, “we need dialogue that raises challenging questions about racism, eugenics, colonialism, reproductive justice, and more,” argued Hasson. CGS's Missing Voices Initiative aims to amplify the perspectives of scholars and activists committed to social justice and human rights and to demonstrate, through events like this webinar, how different conversations about heritable genome editing might look when diverse perspectives are not merely included but actively centered.

Dorothy Roberts, George A. Weiss University Professor of Law and Sociology and the Raymond Pace and Sadie Tanner Mossell Alexander Professor of Civil Rights at the University of Pennsylvania, and internationally recognized scholar and advocate, challenged the assumption that heritable genome editing would “undeniably improve the quality of human lives.” Although advocates of HGE assume that “gene editing will make people better off,” Roberts questions the idea that using heritable genome editing to eliminate “unwanted” traits and amplify “desirable” ones would benefit society.

“We need a full and equitable deliberation of the ethics of human genetic modification that includes this foundational question of the meaning of human well-being,” added Roberts. “That means it must include the voices of groups currently disadvantaged most by social inequalities.” Unfortunately, the discourse so far has excluded these crucial perspectives and been dominated by professional elites whose arguments for heritable genetic modification are “based on false assumptions of scientific objectivity and a universal concept of what human well-being is.”

Clip: Dorothy Roberts on the benefits of centering diverse perspectives

Activist and educator Milton Reynolds spoke from his vantage point as an educator, often working with those teaching high school and middle school students. Reynolds stressed the importance of beginning these types of conversations early and repeating them often. This helps students “develop the kind of sophisticated systems thinking that can intervene in what I've come to call the attribution error. That is the success of indoctrination into ideas of race that cause us to look at the body as the site of intervention rather than the social context in which the body is situated and in which meaning is assigned to it.” As Reynolds pointed out, it's difficult to imagine that a society with an essentialist view of difference will be able to interact with these technologies responsibly and not reproduce systems of oppression. Moving past essentialist understandings of difference will be a challenge and will require ongoing conversations––“a process, not an event."

Clip: Milton Reynolds on bridging the gap between the sciences and humanities

Krystal Tsosie (Diné/Navajo), an Indigenous geneticist-bioethicist and founder of the Native BioData Consortium, the first US-based biobank for Indigenous genomic data, began with a brief introduction in both English and her traditional Navajo Language. She prefaced her remarks by stating that although her views come from an Indigenous perspective, they reflect her individual experience. Tsosie pointed out that the ethical concerns about human gene editing technologies are not new. “The proverbial writing has been on the wall for some time.” The question is, why do these ethical concerns continue to be downplayed?

Tsosie also addressed the fact that disempowered communities are often accused of being “anti-science” when they express concern or caution over new technologies. But this caution, informed by a history of past harms, is important. Questioning the creation and implementation of new technologies acknowledges the potential dangers and power dynamics involved, helping prevent new harms from emerging out of old patterns. Given histories of biocolonialism and the tendency to see Indigenous populations as a source of valuable genomic data, “we really need to think about whether or not we are looking at the same extraction we have seen before, but utilizing new genetic tools,” said Tsosie.

Clip: Krystal Tsosie on the danger of democratizing technologies and the question “who is benefiting?”

As co-founder of the first ​​Indigenous-led biological data repository in the US, Tsosie has seen how drug companies are interested in access to their database for financial benefit. These same companies neglect to study conditions that affect Indigenous peoples directly because they don't constitute a profitable enough market segment. It is this profit-driven model we need to be aware of, warns Tsosie. Again, we have to ask ourselves, who will benefit? What is the desired outcome? And who will ultimately have access to gene editing technologies when numerous communities don't have access to basic healthcare to begin with?

Clip: Krystal Tsosie on the lack of equitable healthcare

As the roundtable opened up for conversation, Roberts endorsed Reynolds' point that neglecting or excusing the past can only lead to more harm, and agreed with Tsosie's support of those who question the benefit of some technological interventions. “If you raise issues of social justice, many people will say you're not practicing good science…. I've found this claim––‘you're not being scientific’––is often used when you point out how scientific innovations can be used inequitably.”

Responding to Roberts and Tsosie, Reynolds pointed out that equal access is often taken to mean equal benefit. However, as he said, “when we look back on the rearview mirror of technology, and what it’s done to the region and to society, it’s clear that there have been differential harms and clearly differential benefits. The benefits accrue pretty narrowly and the consequences accrue far more broadly and that’s what we have to be worried about.” Echoing Tsosie, he also noted the difficulty in separating technologies from the economy and emphasized that we can't disregard the past when thinking about the effects these technologies and ideologies will have in the future. As Tsosie emphasized when looking ahead to the future, “democratizing” technologies still disenfranchises minority populations. “The system of ‘benefits most’ is one that will contribute to the further erasure of small populations like Indigenous populations. So, we should be advocating for equity as opposed to democratization. And these two terms are not synonymous.”

To close, Hasson posed a last question to the panel: How do we change the current conversation about heritable genome editing?

Clip: Katie Hasson asks, “How do we change the current conversation about heritable genome editing?”

In her response, Roberts stressed that more efforts like this roundtable are necessary to raise consciousness about human gene editing technologies. In addition, we have to find meaningful ways to impact public opinions and policies. Tsosie added that “science has to come to a sense of humility if they want to engage communities… It involves reckoning with the past––truly reckoning with the past instead of just trying to sweep it under the rug.” Lastly, she emphasized empowerment: when bringing people to the conversation, we must also ensure they are empowered to make a difference.

The Missing Voices Initiative, organized by CGS, plans to continue this conversation with a series of virtual events in 2022-2023. The next event, “Forging New Disability Rights Narratives about Heritable Genome Editing,” will be held in November and feature Silvia Yee (Disability Rights Education & Defense Fund), Teresa Blankmeyer Burke (Gallaudet University), and Rosemarie Garland-Thomson (Emory University), with Rebecca Cokley (Ford Foundation) moderating. Subscribe to the newsletter and follow CGS on social media for details on this and other upcoming events.