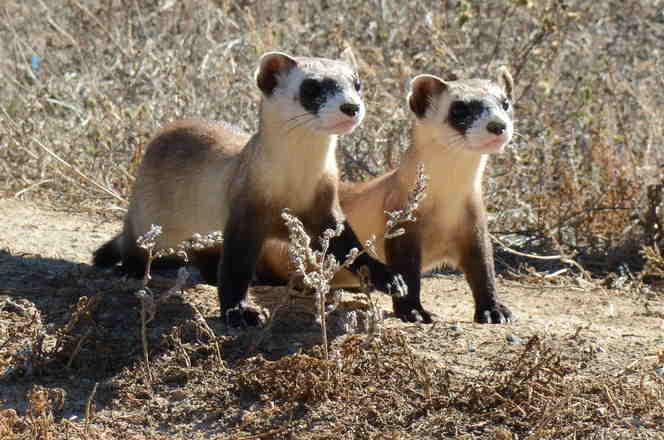 "Black-footed Ferret Kits" by USFWS Mountain Prairie
is licensed under CC BY 2.0

The New York Times published on February 18 an enthusiastic article about a black-footed ferret, hailing it as “the first of any native, endangered animal species in North America to be cloned.”

As we have been documenting for many years (see below), grand claims for animal cloning go back to the birth of the first cloned sheep, in 1996. The New York Times was so excited by this event that it ran 17 articles in two weeks about human reproductive cloning. For a few years thereafter, there was much excitement about the prospect of both human and animal clones.

The only claims of human clones were fakes, but there was more plausible talk about cloning at least two dozen animal species. The first cloned endangered animal, a kind of wild cattle called a gaur, was “born at 7:30 PM on Monday, January 8, 2001,” according to the press release. (Of course there was a press release.) It died two days later. Such failures were much more common than successes; the process was, and is, extremely unreliable. For example, attempts to clone the recently extinct mountain goat called the Pyrenean ibex, or bucardo, in early 2009 (using enucleated eggs from a domestic goat), resulted in:

Dog cloning, which is still a business, notably in South Korea, isn’t much better. Indeed, Lou Hawthorne, who essentially invented the industry, quit in 2009, citing an appalling series of failures and cruelty.

Meanwhile Revive and Restore, the nonprofit behind the cloned ferret, continues to advocate for re-engineering extinct and endangered species. Co-founder Stewart Brand explained why at a Stanford University event in 2013 (at the end of this video):

We do it because we don’t want to be a party to a death that large. If something goes extinct, it hits us in the marrow.

Joseph Bennett, the lead author of a 2017 paper on the subject [abstract], has explained the problem with this emotional appeal:

If you have the millions of dollars it would take to resurrect a species and choose to do that, you are making an ethical decision to bring one species back and let several others go extinct. It would be one step forward, and three to eight steps back.

Update (2/26): GMWatch writes: We would just add to the important points made in the article that it seems more than ironic that the US Fish and Wildlife Service was among the collaborators on the cloning project, given that federal agencies have failed to provide and protect enough suitable habitat to ensure the survival of the black-footed ferret.