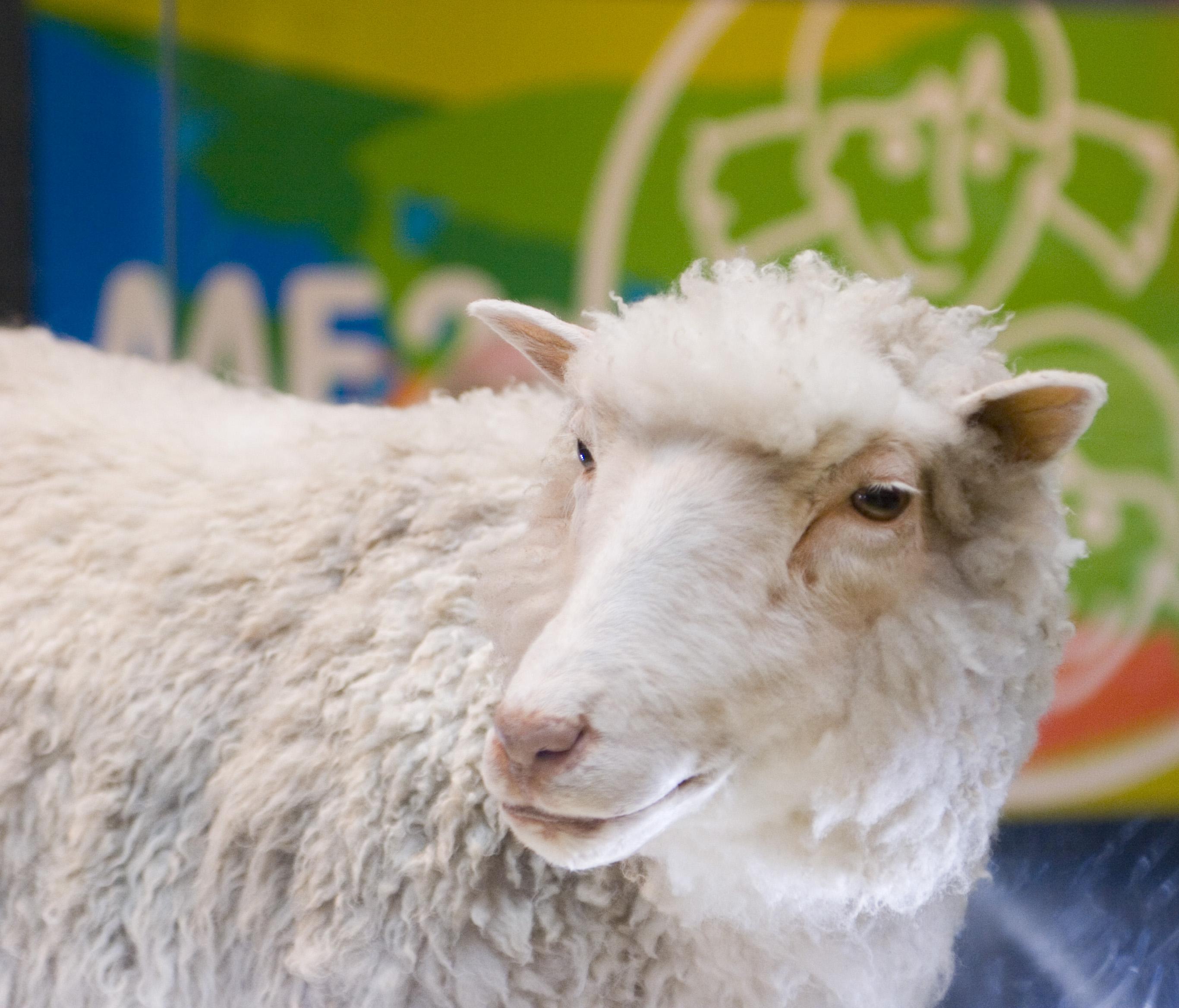 A Star is Born

On July 5, 1996, the most famous individual sheep in history was born: Dolly, the first mammal cloned from an adult cell.

Scientists had cloned frogs previously, but many considered using an adult mammalian cell to produce a new creature with the same genome to be impossible. There was no public notice on the day of Dolly’s birth; the announcement was made on February 24, 1997, by Ian Wilmut and colleagues at the Roslin Institute, Scotland, the day after a newspaper scooped the official publication in Nature.

Her birth name was 6LL3, but she was nicknamed Dolly by one of the stockmen who acted as midwives because she was grown from a former mammary cell and he thought it was cute to reference the country singer. Ms. Parton turned out to be a good sport about it, quipping, “I never met her but I always said there’s no such thing as baaad publicity.”

Even in those days before social media, Dolly became a global sensation. By most accounts she thoroughly enjoyed the attention, the treats she was given, and being treated like a pampered pet. She had six lambs from three natural pregnancies but developed arthritis at age four. Wilmut is completely certain Dolly's health problems had nothing to do with her origin: “She was just unlucky.” Dolly developed a serious lung infection and was put out of her misery on February 14, 2003; she had barely half the lifespan of most sheep.

When Dolly was born, the idea of cloning, especially human cloning, had been around for years. James Watson wrote an article in The Atlantic in 1971, asking whether we wanted to be “Moving Toward the Clonal Man”; a 1976 novel, which was made into a 1978 movie called The Boys from Brazil, fantasized about 94 clones of Hitler. But the news about Dolly made cloning all the rage—immediately and for several years afterward.

The New York Times, for instance, ran 17 articles in two weeks about human cloning, including:

And that was just the start. In the next few years, a Chicago physicist turned biologist with the wonderfully appropriate name of Dr. Seed announced his intention to start a cloning clinic—of which he personally would be the first patient. Nothing came of it, and the FDA frightened him off with a warning letter. Then two actual fertility specialists, Severino Antinori of Italy, and Panayiotis Zavos of Cyprus and Kentucky, separately and then together announced their intention of cloning people; nothing finally resulted but headlines. (I interviewed Zavos at one point and, since I live in California, he promptly pitched me on writing a screenplay; uh, no.)

The low point of the media circus came when a bizarre extraterrestrial cult, the Raëlians, announced that a cloned baby had been born on December 30, 2002; they called her Eve. This announcement was, as we suspected, complete bullshit.

A direct and lasting effect of the initial New York Times story about Dolly was the development of the pet-cloning industry, which unfortunately continues to this day. John Sperling, an eccentric billionaire (aren’t they all?) read about Dolly and immediately wondered if someone could clone his girlfriend’s dog, Missy. He delegated the project to his girlfriend’s son, Lou Hawthorne, who set up a company called Genetic Savings & Clone. They hired scientists from Texas A&M who failed, though they did produce the first cloned cat, cleverly called CC. However, they foolishly cloned from a calico cat; calico coloring occurs due to random X-chromosome inactivation, so CC did not actually resemble the genetic donor. Oops.

Worse, from an animal-welfare perspective, CC was the result of 188 nuclear transfers, leading to 82 cloned embryos, and ultimately, one successful pregnancy. Quite how many cats were involved is unclear, but lots.

To make a long story short, Hawthorne eventually partnered with Hwang Woo-suk, the Korean scientist who had been disgraced for faking the supposed first production of human embryonic stem cells by cloning as well as for embezzlement and abuse of research subjects. Hwang did eventually produce four clones of Missy the dog in 2008. (A fifth was born but did not survive.) They didn’t exactly resemble each other or Missy, and Hawthorne’s mother rejected the one she was given; at last report, three of the clones lived with Hawthorne. A peer-reviewed paper was published in 2009, saying that "as few as 14 dogs and 54 reconstructed embryos were needed to produce a cloned puppy.” Hwang and his Sooam Biotech Research Foundation continue to clone dogs commercially, charging up to $150,000.

Hawthorne finally quit the dog cloning game in 2009. There were both business and legal issues, and he finally admitted it was too hard to treat the many involved dogs well (“unscalable bioethics”).

The technology was also shockingly unreliable. Anyone even thinking about hiring Sooam to clone their pet should know that, in Hawthorne’s experience:

It would be genuinely interesting to see a peer-reviewed paper about that last item, which might reveal previously unknown biological mechanisms. Hwang and colleagues continue to publish and are starting to use CRISPR for “canine cancer research.” Wilmut would probably approve; he told Modern Farmer in 2013:

Dolly demonstrated we could clone a mammal, but cloning is almost beside the point. … The ultimate plan was not about making copies of DNA, but of making changes. The prospect of altering DNA, making livestock more resistant to disease, that’s the important thing.

Poor Dolly. She was only a means to an end.