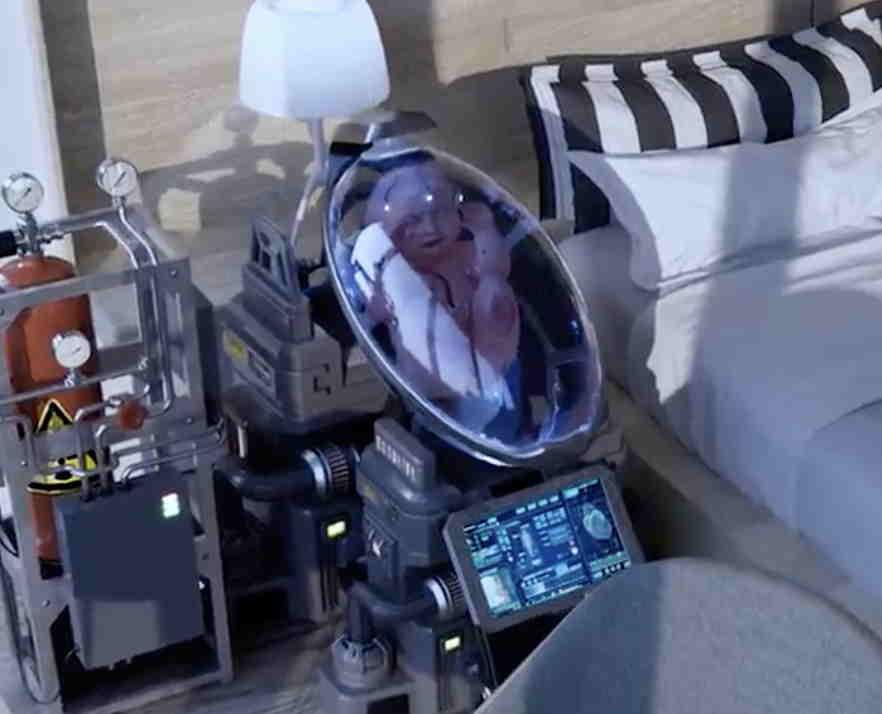 Or, if you prefer, you could take home your artificial womb and grow your baby in your bedroom. And by the way if you have any little preferences for the future child’s genetic makeup – resistance to disease, high intelligence, etc – that can be taken care of too. A genetic test of the baby will confirm your parentage. And there will be no problem seeking surrogates or relying on the unpredictable results of old-fashioned intercourse.

This is, of course, not real. Nevertheless it was picked up by the UK Daily Mirror, which demonstrated hostility in the headline but no skepticism in the report:

A few other outlets picked up the story, most but not all essentially just printing the press release. Rachel Moss at HuffPost called it science fiction but suggested it might happen, and quoted Andrew Shennan, professor of Obstetrics at King’s College London, suggesting that the “ethical battles were largely covered with the advent of IVF. … In a way, you’re just asking the machine to be the surrogate, instead of another woman.” With that, one may certainly disagree. Sam Westreich gave the whole concept a good debunking at Medium.

But what is going on? Al-Ghaili has clearly put a lot of effort and a fair amount of cash into this, and why? It may be an elaborate art project, reminiscent of Alba, the fluorescent bunny, but of even less scientific value and with a much more elaborate media presence. More likely, it may be intended as an advertisement for his business and brand, which have something to do with “imagining the future,” “making science accessible,” and similar blather. Al-Ghaili is also on Instagram and Facebook, and has an accessible Google Drive. On his YouTube channel, this video is currently the second-most popular, behind a Nuclear-Powered Sky Hotel, for which the most-liked comment is:

What if we combined the Titanic with the Hindenburg and then put a nuclear reactor in it? What if.

The popularity of that comment restored my sometimes shriveling faith in humanity. As did one of the most-liked comments on the EctoLife video at YouTube:

Happy to see the comments! I almost thought maybe I’m the only one who thinks this is disgusting

Clearly, this particular project is not ready for prime time – or for a Christmas present any time soon. But the vision of the future it promotes is one that some scientists and fertility industry entrepreneurs would like to make a reality, as we have discussed several times (1, 2, 3). And certainly, despite Professor Shennan’s simplistic attempt to gloss over the issues, there are many ethical as well as physical dangers to consider. A very distinguished panel discussed The ‘Perfect’ Baby?: The Dangers of Gene Editing in Assisted Reproduction in August at an event co-hosted by CGS and UC Berkeley’s Othering & Belonging Institute. The event, which featured bioethicist Françoise Baylis, reproductive justice activist Nourbese Flint, and disability scholar and activist Karen Nakamura, was grounded in the recent report “Engineering for Perfection: The False Promises of Gene Editing in Assisted Reproduction” by Meghna Mukherjee and Nairi Shirinian, who also took part. Video and transcripts are available.

If Al-Ghaili’s publicity stunt leads to more and better-informed discussion of these issues, then maybe it will have some redeeming value despite itself. We need education and conversation, not glib fantasies.