Strides made but stigmas remain: Japan hesitant in embracing Paralympics 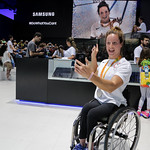 When the Tokyo Paralympics opened on 24 August, the Japanese capital became the first city to host the Games twice. The first official Paralympics were held in Rome in 1960 and the second after the 1964 Tokyo Olympics.

Both the 1964 and the 2021 Paralympics opened in extraordinary circumstances. The first Tokyo Olympics and Paralympics were seen as Japan’s return to the world stage after it resurrected itself from post-war devastation. The current postponed Paralympics are the first to be held during a global pandemic.

In the intervening 57 years, tremendous strides have been made in terms of attitudes to disability in Japan, but stigmas remain in a culture that still places considerable emphasis on conformity to societal norms and not standing out from the crowd.

While it is difficult to assess the exact impact of the pandemic on attitudes towards the Paralympics, it is hard to deny that they have not been embraced in the way the Olympics were, despite significant public... see more

India has approved a new COVID-19 vaccine that uses circular strands of DNA to prime the immune system against the virus SARS-CoV-2. Researchers have welcomed news of the first DNA vaccine for people to receive approval anywhere in the world...