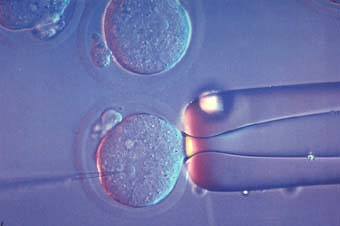 The New York-based fertility doctor who last year acknowledged that he deliberately evaded US regulations by going to Mexico to produce a baby using nuclear transfer (or “three-person IVF”) has launched a company to market the risky and unapproved technique. Highly controversial even when considered for the purpose of preventing the transmission of a rare form of mitochondrial disease, the technique is now being promoted by the same doctor for age-related infertility.

In an article in today’s MIT Technology Review, Dr. John Zhang also says that “a future step will be to combine the technique with editing genes, so that parents can select hair or eye color, or maybe improve their children’s IQ.” In his words, “Everything we do is a step toward designer babies,” and a child created according to his plan would be “very much like an iPhone that’s designed in California and assembled in China.”

“Zhang is open and unapologetic about a commercial effort to program greater and greater social inequality into our genes,” said Marcy Darnovsky, PhD, executive director of the Center for Genetics and Society. “His project makes clear the urgent stakes of the current debate about human gene editing. If we fail to hold the line against its misuses, we could find ourselves in a society divided by the cost of the genetic upgrades parents purchase for their children – a world even more unequal and discriminatory than our own.”

Zhang, founder and CEO of the start-up Darwin Life, is offering what the company calls HER IVF (Human Egg Reconstitution IVF), which its website says will “reverse the effects of age on human oocytes and repair certain cellular defects,” purportedly thereby “prolonging natural fertility.”

“Claims that this is a `proven treatment’ and a `successful solution to age-related infertility’ are outright misrepresentations,” said Darnovsky.  “This is an experimental technique, with no robust peer-reviewed studies to support either its effectiveness or safety. Zhang and his collaborators are putting vulnerable people seeking treatment for infertility directly in harm’s way.”

Nuclear transfer techniques involve removing the nucleus of an egg or early-stage embryo and inserting it into the enucleated egg or embryo of another person.

“This is not simply a variation of in vitro fertilization,” Darnovsky said. “It is a biologically extreme procedure that pulls apart and patches together pieces of gametes or embryos derived from different individuals. It could create embryos that look fine early on, but produce devastating health issues for a resulting child. Anyone considering using this procedure should very carefully investigate the risks, the unknowns, and the commercial incentives behind it.”

In addition to raising safety concerns, nuclear transfer techniques are controversial because they are technically a form of human germline modification. Though they do not alter genes in the nuclei of cells, they produce heritable modifications that raise serious social and ethical concerns.

“Zhang’s rogue behavior sets an extremely dangerous precedent for the prospect of full-blown human germline modification,” Darnovsky said. “It makes clear just how crucial it is to put human germline editing for reproduction off limits, as more than 40 nations have already done.”