Whose Body, Whose Property, What Choice? 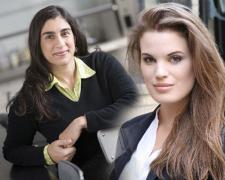 "I've done this because of my poverty. Otherwise I would never have taken this step."

The words of Aasia Khan, an Indian woman acting as a surrogate for an American couple in the documentary Made in India, echoed through the sound system at The New School’s panel entitled “Whose Body, What Choice: Egg Provision, Gestational Surrogacy, and Extending Parenthood”. In addition to viewing clips from Vaishali Sinha and Rebecca Haimowitz’s award-winning documentary, panelists spanning health psychology, queer studies, law, media studies, and life science came together to discuss how emerging reproductive technologies support new forms of family making, invoke bodies in labor and care, and provide bioresources for a burgeoning stem cell industry.

Psychologist Lisa Rubin, queer studies scholar Laura Mamo, and filmmaker Vaishali Sinha described the ways that Assisted Reproductive Technology (ART) has become a common practice in Western countries, yet increasingly more dependent on bodies abroad. As more individuals view ART as a “natural” part of their personal reproductive journey, many assume that the techniques involved in ovarian hyperstimulation, in vitro fertilization (IVF), and surrogacy are FDA-approved and safe. But few are aware of the necessary labor involved and the potential inequities that can arise with increased use of ART.

As a result of shifting legislation, there is both limited access to and varied payment for bodies, cells, and tissues used in the reproductive and stem cell contexts, with little regard to the labor and potential health outcomes of all involved. As one attendee commented, she was unaware of the details involved in the egg retrieval surgical procedure which requires puncturing hyperstimulated ovaries—a separate puncture for each egg removed.  Additionally, the ripple effects of the stress of living with economic constraints can influence the health of the egg provider or surrogate, and the health of the potential child through DNA reprogramming events.

Using visual narratives from the newly launched Stem Cells Across the Curriculum project, biologist Katayoun Chamany, showcased how ART can involve multiple bodies, including those of the egg provider, the potential surrogate, the embryo, and the future child. Some children are conceived though a combination of IVF and Preimplantation Genetic Diagnosis (PGD), a genetic screening technique that can exclude embryos with gene variants associated with disease risk, but improve the probability of an immunological match to a sibling living with disease. Stem cells can be obtained from the cord blood, peripheral blood, or bone marrow of the “savior sibling” to support the treatment of the sibling living with disease. The labor involved in hormone stimulation of the mother’s ovaries and the retrieval of stem cells from the sibling, create new forms of kinship and responsibility in families that have the means to engage in such practices.

During her presentation, law scholar Lisa Ikemoto touched on the issues of labor, property, and informed consent. Participation in surrogacy, tissue and egg donation, and clinical trials is not commonly thought of as “labor” as it is defined in The Labor Theory of Value. When it comes to regulating ART practices, this perception influences how compensation for surrogacy and egg donation is determined. Providing a history of property law and practice, Ikemoto, illustrated how bodies and cells used in the service of ART may be considered property secured through “purchase” or “labor of invention.”  In the past, informed consent was designed to give research participants the autonomy to consider the risks and benefits associated with a research study as part of their decision making about whether to agree or refuse to participate. As Ikemoto illustrated using three case studies, it seems that informed consent now serves the purpose of a contract in which the cell or tissue provider gives up all property rights.

As Ikemoto detailed, the landscape in the U.S. is complicated and inconsistent from state to state and case by case. Thus, other countries have emerged as leaders in commercialized gestational surrogacy supporting contract pregnancies and creating a multibillion-dollar-a-year industry. In this context, IVF is used to create embryos that are then transferred to the uterus of the person willing to serve as the gestational surrogate and undergo caesarean section to deliver the child to the intended parents.

In the U.S., acquiring the services of a gestational surrogate can cost upwards of $100,000.  Some states, including New Jersey, Michigan, and Washington, ban contract surrogacy, while New York and Washington D.C. currently have pending legislation that would regulate and legalize the practice. The varied patchwork of laws combined with the steep cost has pushed some prospective parents to seek out surrogates from other countries, including India, in a process known as “transnational surrogacy” or “reproductive tourism.”  India legalized contract surrogacy in 2002 for heterosexual couples, and costs are listed at under $30,000 with surrogates reportedly being paid anywhere from $800-$8,000 at the discretion of the surrogacy clinic.

During the dialogue moderated by Lisa Rubin, the panelists discussed the consequences of a new law enacted this year put forth by the Indian Council of Medical Research (ICMR), a government-appointed body. The law bans surrogacy services to foreigners and is driven by a desire to “safeguard the rights of the surrogate mothers.” A similar ban is already in place in Thailand. However, as Sinha pointed out, there has been concern that these bans will push surrogacy to the black market, increasing the danger to surrogates. Instead of outlawing transnational surrogacy, many women’s rights advocates in India have come out in support of more regulation of the surrogacy industry, as depicted in Amrita Pande’s ethnographic work Wombs in Labor: Transnational Surrogacy (mentioned in Ikemoto’s presentation). Many of these advocates believe the process of putting regulatory measures into place encourages discourse around the subject, and keeps surrogacy out in the open and off the black market.

Laura Mamo extended the conversation regarding rights, protections, and benefits by asking “From what towns, communities, and countries will the bio-materials be drawn...to fulfill the American Dream?”  The conversation then turned to who is most likely to benefit, as it is clear that most of the economic gain benefits some stakeholders, such as surrogacy clinics and medical professionals, and not others, such as the surrogates. This disparity calls into question society’s ability to put the emotional, mental, and physical well being of surrogates in front of a profitable industry and the desire to create genetically related families. Shamina Shafiq, head of the nonprofit Progressive Organization for Women’s Empowerment and Rehabilitation, states that the main beneficiary of surrogacy should be the surrogates, not the medical fraternity. Even if regulations were put in place to ensure that providers are the main beneficiaries of their labor, would it be enough to shift the balance of power and prevent surrogates and egg providers from being exploited?

In addition to fair payment, appropriate guidelines, and regulation, the panelists also discussed procedural justice issues associated with ARTs.  That India and some states in the U.S. restrict access to ARTs to those who are married or in heterosexual couplings exemplifies the ways in which family making is not accessible to all. Not surprisingly, a new market catering to homosexual couples and singletons has emerged, with Mexico serving as one site of such services.

The panelists also raised questions around the recruitment practices for egg “donors” that seek individuals with high SAT scores and other desirable characteristics and juxtaposed this practice to those used for egg provision in stem cell research. In June 2009, New York became the first state to allow taxpayer-funded researchers to compensate those who provide eggs to scientific research, stating that the compensation was socially just. Similar to the varied regulations for surrogacy, compensation rates for egg donors for reproductive purposes fluctuates by state. Thus, the Ethics Committee for the Empire State Stem Cell Board used the caps put forth by the The Ethics Committee of the American Society for Reproductive Medicine (ASRM) at no more than $10,000 per egg retrieval cycle. Though the matching amounts for egg provision across the reproductive and stem cell research sectors can be described as equitable, the payment scales have come under question. Some feel that the pay exploits those with low economic means and further widens the gender equity gap in employment opportunities, and others feel that they should be able to negotiate a fair rate, and have sued the ASRM for price fixing based on the Sherman Act.

Documentaries such as Eggsploitation by Jennifer Lahl, filmmaker and founder of The Center for Bioethics and Culture Network, highlight the potential short-term and long-term health risks and overall lack of knowledge around the process of egg retrieval. The process of retrieving oocytes consists of a series of self-administered daily hormone injections to suppress the donor’s cycle, stimulate the ovaries, and trigger ovulation. Using human chorionic gonadotropin (hCG) injections is associated with many health risks, such as Ovarian Hyperstimulation Syndrome (OHSS), which could result in ovarian torsion, blood clots, fluid accumulation in abdomen and chest, kidney failure, and in rare cases, death.

Given these risks, those lobbying for the 2013 “Bonilla Bill” in California argued that without compensation, they couldn’t retrieve the oocytes that will one day contribute to the research that will benefit women’s health. Ultimately, though the bill was passed by the congressional legislature, it was vetoed by the governor who claimed that "Not everything in life is for sale, nor should it be." However, a new act was proposed in February 2016 by California Assembly Member Autumn Burke for compensation to those providing eggs for medical research on the basis that they are acting as any other human subject participating in research. However, as Chamany pointed out, given that there are no long-term data on the health outcomes of young fertile oocyte providers, bills such as this one proposed in California, and the existing order in New York, should incorporate long-term monitoring of the health of these oocyte providers if the rationale is based on encouraging research participation in clinical trials

More recently, advances in egg freezing may shift these health and economic concerns from third-party egg providers to those seeking pregnancy later in life. As Ikemoto highlighted in her presentation, earlier this year the United States military agreed to cover the costs of sperm and egg freezing for their personnel, following the trend set by Apple and Facebook in 2014. This type of policy highlights how social policy frames family making as an essential human activity, such that if an opportunity is available, one should take advantage by any means. The discussion on this panel cast a critical eye on such generalized views and presses us as we move forward to consider the trade offs of any such policy in terms of who benefits and who carries the burden or risk.

Katayoun Chamany is Associate Professor of Biology at Eugene Lang College for Liberal Arts at The New School. @KatayounChams

Correction: The first iteration of this blog post paraphrased Aasia Khan's quote from Made in India as "I would not have done this if it weren't for the money."

The proposed regulation is a key action in the EU strategies on the rights...