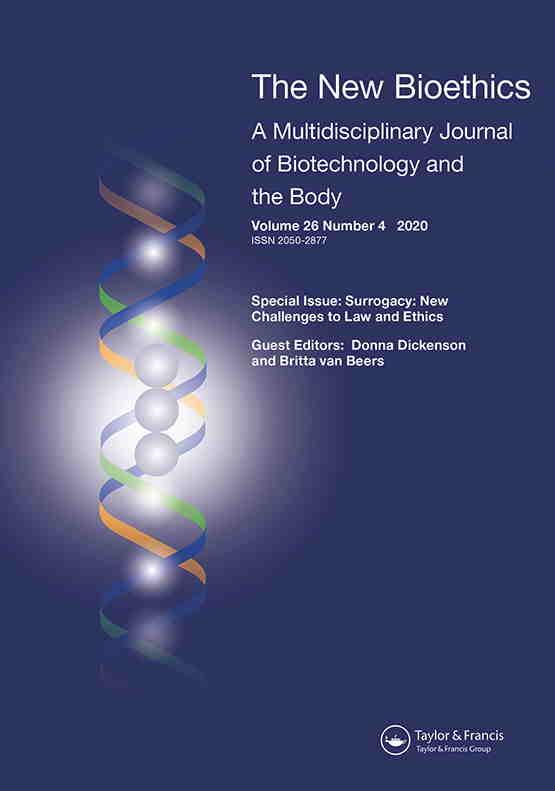 Everyone knows, or thinks they know, that complex and fast-moving new biotechnologies inevitably outstrip legal regulation and ethical scrutiny. Surrogacy—the subject of a special issue of The New Bioethics edited by myself and Britta van Beers—challenges that “truth” or truism. The technology involved is nothing like as complex or new as, say, CRISPR genetic engineering. It has remained much the same since the birth of Louise Brown, the first IVF baby, in 1981.

Conversely, there is no legal vacuum. Relevant and clear principles of both civil and common law existed before IVF technologies became widespread. For example, both civil and common-law systems have traditionally agreed that the woman who gives birth is the legal mother, whether or not she is also the genetic mother. A phrase from civil law sums up the traditional principle: mater semper certa est—it is always certain who is the mother. While the term “surrogacy” implies that the birth mother is not the real mother, that has never been the dominant legal position.

In the case of surrogacy, it is not new biotechnologies themselves that have challenged well-established principles in law and ethics, but rather a range of political and social phenomena including commodification of women’s reproductive tissue and labor, new ways of forming families, and (before Covid-19, at least) the comparative ease of international travel. These conditions facilitated the development of a cross-border surrogacy industry valued at up to $2 billion annually in India alone as of 2016. The articles in our special issue of The New Bioethics explore some of the ways these pressures have challenged the existing law and ethics of surrogate motherhood, giving rise to new legal initiatives and controversies in countries around the world.

In the United States, legislation has been enacted in New York State that mitigates the force of the traditional principle that the birth mother is the legal mother, in response to perceived inconsistencies in practice and support for the right to found a family. As Marsha Darling describes, the recently enacted Child-Parent Surrogacy Act claims to balance the stakeholder interests of surrogates, infant children, and donor-conceived children born through surrogacy arrangements, although a competing bill would have struck a different balance.

In the UK and the Netherlands, according to Britta van Beers and Laura Bosch, government committees and law commissions have recently proposed to adopt a system of pre-authorization of surrogacy agreements. Such a system would automatically recognize intending parents, if they fulfill a set of requirements, as legal parents upon the birth of the child, thus relinquishing the principle of mater semper certa est. However, at the moment of writing, the outcome of these proposals is still uncertain.

Indeed, in other countries, such as France, movements favoring legalization of surrogacy laws have not carried the day. Meanwhile, particularly in South and Southeast Asian countries, there has been a reaction against abuses of commercial surrogacy and in favor of stricter regulation or even prohibition. The United Nations Special Rapporteur Maud de Boer has observed in a report on surrogacy and the sale of children that “commercial surrogacy as currently practiced usually constitutes sale of children as defined under international human rights law and is thus a violation of human rights.”

What’s the ethical basis for this strong claim? It can be argued that even altruistic surrogacy, without payment, could still violate the principle that a person cannot be an object. On this account it makes no difference whether the babies are paid for, or whether they are likely to be financially better off with the commissioning parents than they would be in their family of origin. Once the legal status of the future child is largely determined through contractual agreements, including the terms of its creation, gestation, delivery, hand-over, and legal family ties, it can be said that the child itself also becomes the object of contractual negotiations.

Framing surrogacy as illegitimate and undesirable commodification of children actually dominated the early legal and ethical literature in the Anglophone countries, with the publication of the UK Warnock Commission report in 1985 and the development of an anti-commodification discourse among some prominent US writers such as Elizabeth Anderson and Margaret Radin. However, in the US, feminist skeptics found themselves uncomfortable bedfellows with anti-abortion activists and were accused of denying women’s choice and agency, a dilemma still prevailing in France. Additionally, in the United States, progressives argued that legal protections afforded to families should be extended to those who form families in non-traditional ways. That dynamic was powerful in the example of the recent New York State bill.

By contrast, in Spain the historical dynamic was different: prohibition of reproductive technologies under Franco quickly gave way to near-complete liberalization following Franco’s death. Whereas now the discourse in the United States and to some extent the United Kingdom has moved towards liberalization, Itziar Alkorta’s article looks back on the shortcomings of a quasi-free market in reproductive technologies as vindicating the older civil law principle, mater semper certa est.

In France, where surrogacy is illegal, Jennifer Merchant describes difficult legal cases that have arisen, raising questions as to whether French authorities should grant citizenship to children born abroad through surrogacy arrangements, should accept foreign birth certificates, and should recognize the intending parents as legal parents. Although it may be against foundational French bioethics principles to treat children or women’s reproductive labor as commodities, it also seems wrong to ignore the best interests of the child whose existence presents a fait accompli. For example, in the 2014 case of Mennesson v. France, the European Court of Human Rights ruled that the French authorities’ refusal to recognize foreign birth certificates of surrogacy-born twins constituted a violation of these children’s right to private life, and more specifically, their right to an identity. So the human rights argument can cut two ways.

It is often argued that even commercial surrogacy should be respected in the interests of choice: for the commissioning parents, the choice to found families in alternative ways, for example, or the surrogate’s choice to undergo the process in the name of bettering her own situation or providing a child for another family. Against that view, it can be argued that the child has no choice in the matter and obviously cannot give informed consent to being the object of a surrogacy arrangement.

These and other compelling conundrums about choice, commodification, and best interests of the child are at the core of the challenges in ethics and law posed by recent debates about surrogacy. They illustrate the crucial manner in which ethics and law, not new technologies as such, demand that we confront these questions.

Donna Dickenson, Emeritus Professor of Medical Ethics and Law at the University of London, is co-editor (with Britta van Beers) of the special issue of The New Bioethics on “Surrogacy: New Challenges to Law and Ethics,” now available at https://www.tandfonline.com/toc/ynbi20/current, with many of the articles open access.