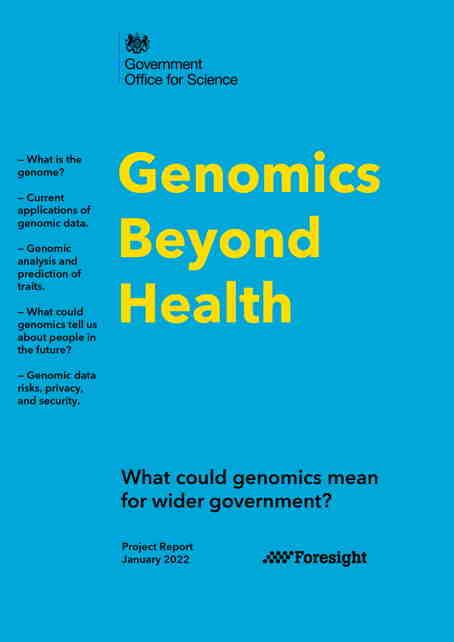 On January 26, the UK Government Office for Science published a 198-page report, plus 15-page Overview, with a website, blog post and press release, titled:

Genomics Beyond Health
What could genomics mean for wider government?

The multiple announcements appear to be entirely routine (the government issued 25 press releases on January 26) and apparently have not yet sparked the national debate that the topic really does deserve. Indeed, it seems at first search that Ian Sample of The Guardian is the only journalist for a major newspaper to have written about it:

The weekly round-up BioNews, the flagship publication of the nonprofit biotech-friendly Progress Educational Trust, also covered it, and the Science Media Center gathered quotes from two professors and the director of the Progress Educational Trust. Genomics England, which focuses on healthcare and the 100,000 Genomes Project, published a response, welcoming the report and describing it as:

deliberately provocative, in that it is seeking to provoke debate on a range of topics of how genomics could be used in the future, beyond its current applications in healthcare or proven applications in other fields.

Which is about right, but downplays that the report is a very basic introduction, even at 198 pages. It starts with a three-chapter, 50-page scientific and historical overview, followed by chapters on “where we are now” and “potential applications” of genomics. Chapter 6 is on “Data, security, and public attitudes to genomics” and the short Conclusion describes “Key areas for policy.”

Strangely, there is very little in the report about current UK legislation for regulating genomic technologies. Despite considering future applications of heritable genome editing, the report completely overlooks the fact that heritable human genome editing is officially banned in the UK, as explained by Baylis et al. in The CRISPR Journal:

In the United Kingdom, heritable human genome editing is prohibited by the Human Fertilisation and Embryology Act (1990 as amended 2008), which stipulates that only a “permitted embryo” can be “place[d] in a woman.” The Act legally defines a “permitted” embryo in such a way as to exclude an embryo with altered nuclear DNA.

Also missing is consideration of the controversial UK legislation allowing nuclear genome transfer in reproductive attempts to avert mitochondrial disease (aka “three-person IVF” or “mitochondrial replacement”). The Human Fertilisation and Embryology Authority (HFEA), which regulates both the fertility industry and scientific research using human embryos, is only mentioned once. The reference comes in the context of HFEA writing a concerned letter to the largest direct-to-consumer (DTC) genomic testing companies, which operate largely under voluntary self-regulation. This, the report suggests (p. 78), is of limited utility since “a recent study found that none of 15 DTC companies which advertised to UK consumers complied with all the principles, highlighting the need for updated and legally binding principles.” That is easy to assert, but translating the need into actual legislation calls for political talents that are beyond the scope of this report.

Aside from significant omissions such as these, Genomics Beyond Health is a useful primer for uninformed politicians. Its main message, repeated often (though not in these words), is:

Someone Should Do Something Soon.

This is true and important, but so are the details of what that something might be, and how interested parties may try to shape regulation. For example, some eager scientists, not to mention the biotech and fertility industries, will doubtless continue to push for relaxing such policies as the 14-day rule (which limits the legal development of embryos for research), driven by a combination of curiosity, blinkered idealism and simple greed. Defining that limit was one of the signature features of the 1984 Warnock Report that lead to the establishment of the HFEA, and to the international acceptance of that limit, which is already being tested, notably by the 2021 guideline revisions proposed by the International Society of Stem Cell Research (ISSCR).

To their credit, the authors of the report recognize that any legislation involving genomics will have to face “many ethical challenges, such as equity of access to these technologies, unfair competitive advantage, and entrenchment of inequalities.” They also note that:

It is important to realise that some of the potential uses of genomics may not be realised in the short or even medium-term future. ... Nevertheless, it is increasingly important to consider how people may apply, or attempt to apply, the science and how policy and regulatory systems may need to adapt accordingly.

Bold type is used throughout for significant terms and notable messages, and that italicized attempt is doubly important. Legislators have a chance, in the short term, to avert problems before they arise.

Genomics Beyond Health also includes pious hopes that the UK’s “world leading history in the development of genomic infrastructure and data” may give it “the opportunity to lead internationally on ethics and regulation as well as advances in data and research.” In this, it refers to initiatives over the last few decades, starting with the British participation in the Human Genome Project. More recent initiatives include Genomics England and its flagship 100,000 Genomes project, since expanded to include one million genomes. Meanwhile The Darwin Tree of Life aims to sequence the genomes of all 70,000 species of animals, plants, fungi, and protists resident in the British Isles, as part of the Earth Biogenome Project. However, recent examples of UK scientific and ethics institutions advocating, sometimes with American allies, for lax regulations that allow envelope-pushing research with serious ethical and social implications undermine confidence in their leadership.

Britain does have a long and distinguished history in the science of biology. It is, after all, the land of Charles Darwin, the revered patriarch of evolutionary science. But it is also the land of Francis Galton, the great statistician now known mostly as the founder of eugenics, the perversion of biological science. The recent revival of an updated eugenics has already rightly provoked reactions in Britain and around the world. The UK’s “world leading history” contains warnings as well as triumphs.

Every page of the report’s text has at the bottom:

Quite right. It’s a gentle hint that the government should have a policy.

Simone Collins knew she was pregnant the moment she answered the phone. She was on her sixth round of in vitro fertilization treatments and had grown used to staffers at Main Line Fertility starting...

In clinics today, fertility patients using in vitro fertilization (IVF) are routinely advised to pay for an expensive supplemental test called preimplantation genetic testing for aneuploidy (PGT-A), in which a handful of cells are removed from the embryo to examine...