The FDA is beginning to move against dubious stem-cell clinics, and not a moment too soon.
By Pete Shanks | 05.29.2018
Biopolitical Times 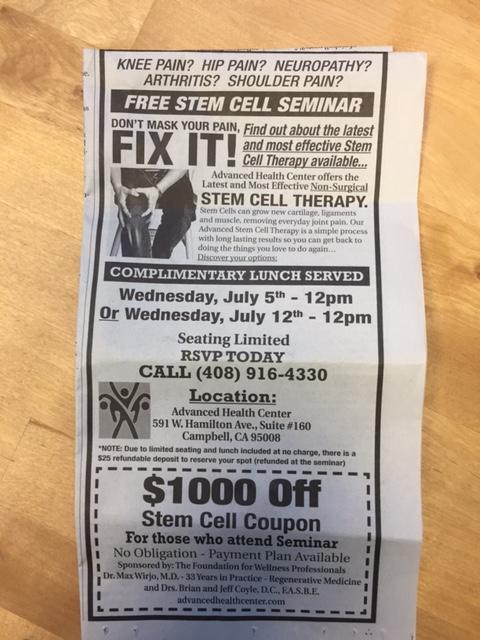 The Food and Drug Administration (FDA) is beginning to move against dubious stem-cell clinics, and not a moment too soon.

The U.S. Department of Justice, on behalf of the FDA, filed lawsuits on May 9 seeking permanent injunctions against two of the most prominent stem cell clinics, one in California and one in Florida. The FDA last August seized a potentially life-threatening virus from California Stem Cell Treatment Centers, which had combined it with stem cells and injected it into cancer patients. Florida-based U.S. Stem Cell Clinic was in the news last year because three patients had treatments they thought would improve their vision but instead became essentially blind; a fourth came forward later. These shut-downs are the next and possibly final sanction for two of the 700 or more such clinics around the country.

In a hopeful sign, these lawsuits received significant mainstream media attention. Michael Hiltzik of the Los Angeles Times remains excellent on these stories; this time he was joined by the Washington Post, which had recently published a detailed investigation; the New York Times; the Associated Press; and STAT, to name but a few. NBC San Diego and CBS This Morning have also run features recently, per the indefatigable Paul Knoepfler of the University of California, Davis.

Considerable credit for all this publicity is due to Knoepfler, who has been blogging about these issues for years; he first warned about stem-cell hustlers in July, 2010. Knoepfler and Leigh Turner of the University of Minnesota raised the profile of under-regulated stem cell clinics in 2016, when they identified “at least 351 companies with 570 clinics.” (The estimate keeps rising.) David Jensen, a widely respected independent chronicler of the California Stem Cell agency, paid tribute to Knoepfler this month.

The recent press is certainly useful, and might even discourage some potential victims, but FDA’s Peter Marks admitted last November:

“There are hundreds and hundreds of these clinics. We simply don’t have the bandwidth to go after all of them at once.”

Several states have been beginning to take up some of the slack. North Dakota recently cracked down on a clinic there. California passed a law regulating clinics, requiring disclosures to patients and annual reports to the state Medical Board. Washington passed a somewhat similar law. Texas had a legislative struggle in 2017 that ended with some protections for consumers patients. Florida, which has over 100 stem clinic clinics and more than its share of problems, considered but failed to pass legislation.

The news is not all bad. There are indeed promising aspects to stem-cell research. Reputable scientists are proposing mechanisms for following up with patients after small-scale cell therapies. JAMA recently published research about the surprisingly large extent of crowdfunding for stem cell interventions, calling for clinicians and others to combat misinformation. The American Society of Gene & Cell Therapy (ASGCT) emphatically disapproves of unregulated gene therapies. Nature is developing its own policy on ethical standards for stem-cell research it will consider for publication, which could be a useful step forward in the academic realm.

By themselves, these academic moves are of course ridiculously insufficient. What is really needed is decisive Federal intervention, which seems unlikely in a political atmosphere that is not so much libertarian as aggressively pro-business. What is happening, on both a state and federal level, is quite the opposite of strict regulation: the passage of “Right to Try” laws.

The general idea of “right to try” is to allow or even encourage terminal patients to access experimental treatments that have not yet been approved by the FDA. They have frequently been criticized as selling hype and false hope. Public interest groups such as Breast Cancer Action (BCA) have been campaigning against the spread of such legislation. BCA’s Karuna Jaggar wrote in Cancer Health:

[B]ehind the appealing how-could-anyone-not-support-it name, RTT [Right to Try] is a libertarian effort by the Goldwater Institute and some Republicans to deregulate the drug market and weaken the FDA. It promises a quick fix for a problem that doesn’t exist. The implication is that the cure is out there, but it’s being kept from patients by government bureaucrats.

A few transhumanists go even further and claim that the FDA is in league with Big Pharma to prevent a latter-day Jonas Salk from eliminating disease because that would hurt profits. These paranoid ravings have no discernible basis in fact, but some stem cell clinics are certain to claim that their patients deserve the right to try their unauthorized, unproven “treatments.”

The blinding of four women definitely raised the profile of this issue, and led to the FDA actions. Let us hope that the next positive move for regulation is not inspired by the death of a patient.

Edited 5/30/18 to include NBC, CBS, and Leigh Turner’s academic affiliation.

Every year millions of people cross borders to undergo medical treatments that are either unavailable in their home country or too expensive. For many, this is a last resort to ease the pain of...

Photo by Pepi Stojanovski on Unsplash

Four years after the FDA admonished stem cell clinic StemGenex for making dubious claims about its services in treating incurable diseases, and 3 years after the company first filed for bankruptcy, the clinic and...