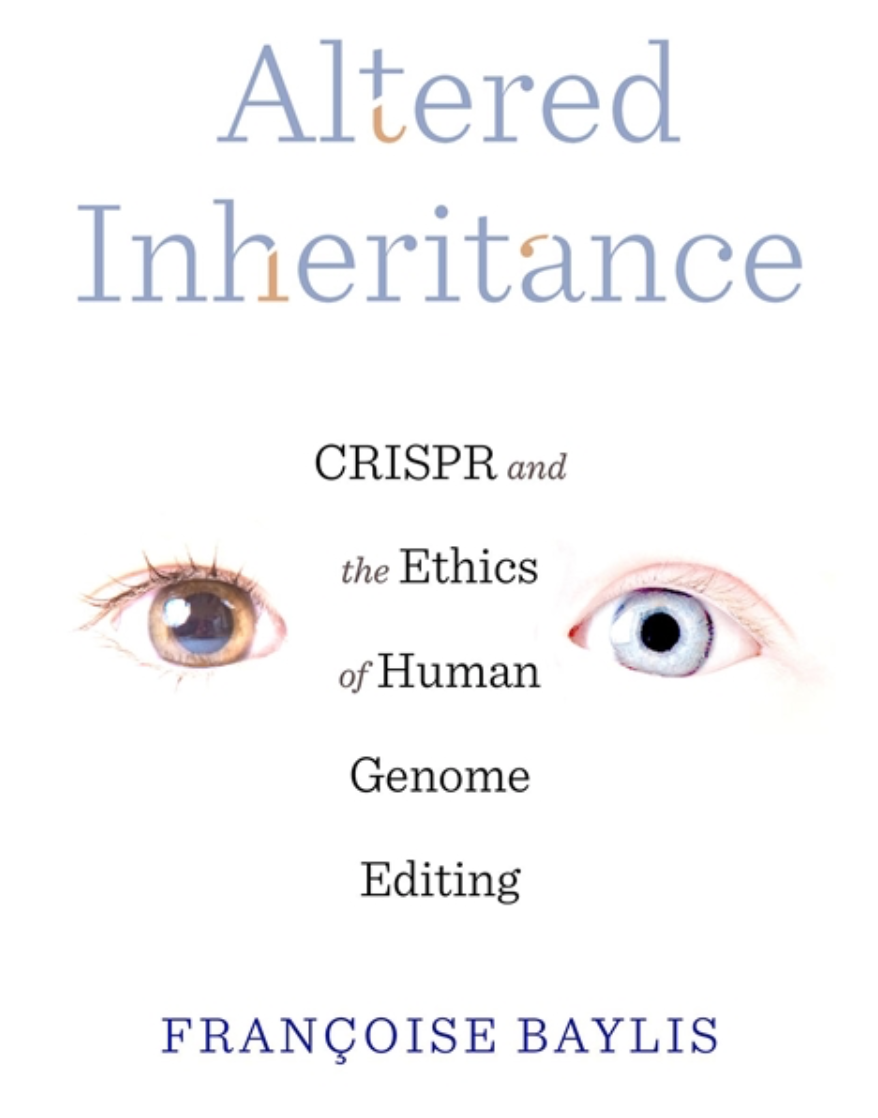 Those who have read academic papers by Canadian philosopher Françoise Baylis — say on social egg freezing, or dementia and identity, or the ethics of creating children with three genetic parents — know her work is incisive, insightful, and rigorous, and her prose accessible and persuasive. Her new book, Altered Inheritance, reveals her ability to deconstruct complex genomic concepts for readers who might have previously believed CRISPR was a term applied only to French fries. It also lays out the critical stakes with regard to editing the human genome with clarity, challenging several conventional approaches to the issue.

Baylis has been intimately involved in the ongoing discussion about the practical and ethical uses of CRISPR. She served on the organizing committee of the 2015 gene editing summit that followed the first use of CRISPR to edit human embryos, and currently is a member of the World Health Organization’s Expert Advisory Committee on Developing Global Standards for Governance and Oversight of Human Genome Editing. Altered Inheritance draws on these and other recent developments to help readers assess the risks and supposed benefits of heritable genome editing.

Baylis acknowledges that it is possible in the abstract to view reproductive genetic modification as having possible benefits, but notes that, “taking into consideration the individual, societal, cultural, political, economic, ecological, and evolutionary ends this technology could serve, I have a number of worries about its possible use.”

Beyond concerns about whether the technology will have unforeseen biological consequences (e.g., off-target effects or impact on epigenetic factors), her concerns include: the reinscription of naïve notions that, as disgraced biologist James Watson said, “our fate is in our genes”; the promotion of greater social inequity and health inequality through the creation of what biologist Lee Silver has called the genetic “haves” and “have nots”; and the exacerbation of discrimination against “diversity and perceived imperfection” such as deafness. Further, she worries that widespread use of reproductive genetic modification will worsen our ability to relate to one another at a time in the world’s history when “social cooperation and cohesion” are vitally needed.

Altered Inheritance provides a helpful two-page timeline of key events in the science of genomic alteration and social reactions to it from 1818-2018. In perusing the last 100 years, one can readily see how Baylis could claim that little progress has been made in discussions about the social implications of human reproductive and genetic technologies. The same talking points have been revisited over and over: the likely harms to children born; the negative consequences of a new eugenics; the difficulty of acquiring informed consent; challenges to parenting; and the opportunity costs of going all-in on genetic modification rather than improving access to health variables like nutrition or prenatal care. Baylis stresses that conventional analyses of these concerns are limited by our ability to recognize genuine wrongs associated with the adoption of heritable genetic modification and ignores deeper questions of hubris and what it means “to embrace a future in which humans are a product of human manufacture.”

To illustrate her point about recognizing wrongs, Baylis provides examples of problematic practices. These include how science already exploits women whose eggs are extracted for research; how current health systems fail to provide equal care and access; and how women, LGBTQ people, and people with disabilities are stigmatized, marginalized, and discriminated against.

These practices, she says, suggest that genetic modifications aimed at eliminating difference of any sort would ipso facto worsen biases “about which lives are worth living and which lives should be edited out of existence,” as well as increase the likelihood that insurance companies would seek to reduce coverage for anyone born with deficiencies perceived to be “correctable.”  Baylis also questions the dedication of major resources to genome editing when so many other urgent medical and public health questions need investigation.

All human genome editing is a form of enhancement

In the chapter “From ‘Well’ to ‘Better than Well,’” Baylis contends that we have not sufficiently understood the categorical and moral dimensions of genetic modification. Often, bioethicists argue that such modifications can be neatly divided into those providing medical treatment and those meant to improve traits — so-called “enhancement.” Many agree that while there may be compelling ethical reasons to pursue treatment, enhancement of any kind is much more difficult to justify. This, says Baylis, is specious logic, as there is no clear line between treatment and enhancement. She writes,

Descriptively, all treatments are enhancements in the sense that all treatments aim to improve an individual by correcting an actual or perceived deficiency in relation to ‘normal’ abilities […]. As such, all human genome editing is a form of enhancement; it is just that some of the enhancements will be health-related and others not.

The distinction is equally useless in helping us make ethical decisions, she argues. Take, for example, a treatment intended to increase the height of boys who are shorter than normal. Whether the shortness is due to a medical condition (say, a hormonal deficiency) or just the pairing of two short parents, it can be argued that the shortness constitutes a health deficiency or leads to diminished psychological and social well-being due to bullying or other forms of discrimination. The intervention could then be morally justified as improving the boys’ overall health. But at the same time, such an intervention can be seen as a form of enhancement, regardless of the cause of the shortness, in which case it would not be justified by the customary bioethical argument.

However, if the intervention were undertaken to add further inches to a boy already taller than his peers in order to increase his chances of being a basketball star, there is a genuine problem. Baylis finds this

an ethically questionable (if not ethically acceptable) form of enhancement. What matters ethically in this case is not that the planned genetic intervention can easily be categorized as a non-health-related enhancement, but that the intervention is likely to decrease equality, access, and fairness.

Baylis is convinced that a new eugenics is baked into heritable genetic modification. If green-lighted, the goal of human transformation — now expressed mainly by fringe groups — would become more mainstream.

The case for slow science

In the most groundbreaking chapters of Altered Inheritance, Baylis puts forward the case for adopting “slow science” and crafts a typology for ethics drawn from Roger Pielke, Jr.’s widely celebrated The Honest Broker (2003).

Slow science, inspired by the slow food movement, contends that the highest aim for science is to make socially relevant contributions. Slow science thus requires that decisions regarding funding and legitimate lines of inquiry must be undertaken with public input; scientists must “take the time required to consult, to deliberate, to question, to investigate, to interpret, and to respond.” While scientists might balk at such restraints, they owe the public (who, in many cases, fund their work) answers to fundamental questions about the aims and uses of their experiments.

The current regime of fast science, predicated upon market forces and the “information economy,” pushes research forward pell-mell under the rationales of speed and profit. In the process, Baylis says, there is no time to consider whether scientific undertakings benefit the commonweal and promote stewardship of our common human heritage: the genome. The higher goal of broader public engagement, from her perspective, is to prevent the perpetuation of inequities through biological interventions. As Baylis explains,

I don’t want to live in a world where a select, privileged few are able to inscribe their privilege in their DNA and thereby exacerbate unfair class divisions and other social injustices.

As a means of thinking about how ethicists might help remake fast science, Baylis modifies Pielke’s typology somewhat to create categories: ethics theorists, ethics analysts, issue advocates, and ethics architects. She draws examples of each type of actor from the last decade of debate over genome editing and shows how ethics architects, in particular, have an important role to play

to maximize participation in policymaking processes, to preempt anticipatory exclusion [of the voices of the public], and to cultivate harmonious collective decision-making by identifying common points of interest and convergence.

One envisions ethics architects playing a vital role in addressing many “wicked” problems well beyond biotechnology, including climate change.

Baylis takes grave issue with science’s efforts thus far to expand the conversation about genome editing. Discussion among scientists, she says, is viewed as a form of robust decision making, when it is clearly lacking in breadth, depth, and inclusivity.  She suggests that a salient maxim in considering the way forward is “’All of Us’ for ‘Us All.’”

In other words, we need radical expansion of public consultation so that “the knowledge, belief, and values” of the full range of stakeholders from civil society weighed against the opinions of experts. Too much of the discourse regarding genome editing, says Baylis, has taken place in small circles of scientists and advanced the interests of hypothetical individuals whose reproductive choices would be expanded minimally by these technologies. Instead, we should be identifying shared societal needs with some urgency.

Baylis ends Altered Inheritance with a kind of invocation — and I will give her the last word here as well:

[I]mportant decisions must now be made — decisions that will set a new course for science, society, and humanity. May these decisions be inclusive and consensual.  May they be characterized by wisdom and benevolence.  And, may we never lose sight of our responsibilities to ‘us all’.”