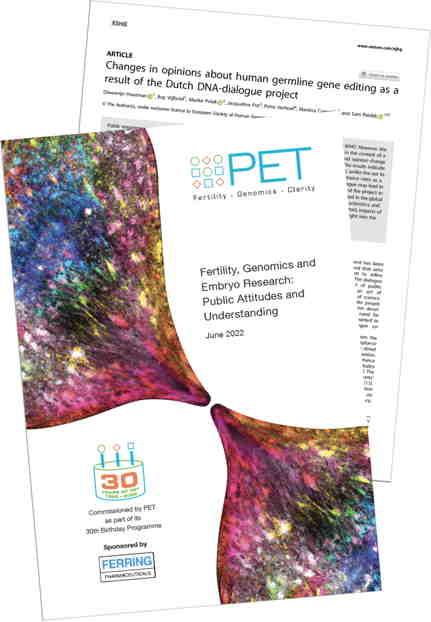 Several new opinion polls on human biotechnology issues have recently come to our attention and two of them are discussed here. As is all too typical of polling on these complex matters, it is not clear that respondents were aware of, or informed about, key background information that would shield them from drawing false conclusions, as discussed below. (For summaries of these and older opinion polls on topics related to heritable human genome editing and cloning or genetically modifying animals, please see CGS’s collection, which goes back several decades.)

Researchers across many fields of study often make assumptions in order to explore territory they know they do not yet understand — hence the title, which refers to a very old joke about physicists. Even false assumptions can be productive, if they give an order-of-magnitude estimate or eliminate an area of investigation and possibly suggest a better approach. As a factor in assessing public opinion, however, they are particularly hazardous, so it was surprising to see a speculative assumption explicitly being used during an attempt to determine public opinion about human germline genome editing (HGGE) — the deliberate modification of genes in eggs, sperm, or early embryos to try to control the traits of a future child.

Dutch researchers aimed to discover the effect on public opinion of structured dialogues about HGGE, and published their results in the European Journal of Human Genetics in May. The researchers hoped “to inform future policy making regarding HGGE” by identifying the needs and values of a representative sample of the general public, and also by seeing if participation in a series of dialogues changed the views of a much smaller sample. The first step was to determine their initial views on three scenarios of gene editing of an embryo: when the future parent 1) has a severe heritable muscle disease; 2)  is healthy but seeks to protect the future child from HIV or another terrible disease; or 3) hopes to increase the intelligence of the future child. Each of the described scenarios ends with the sentence:

Assume the technology is safe and effective.

Those assumptions are highly questionable. As is another, unstated, assumption — that the genetic intervention is necessary. Many heritable genetic diseases do not affect every child of the carrier; using third-party gametes would entirely eliminate the risk of passing down a serious inheritable disease; embryo screening would almost always prevent it. Embryo screening is itself controversial — George Estreich has discussed it in these pages (1, 2) — but it does not involve gene editing.

Safe and effective? Gene editing in human embryos is very far from reliable; the phrase “chromosomal mayhem” entered the discussion from Nature in 2020, describing “large, unwanted changes to the genome at or near the target site.” According to Professor Kiran Musunuru, a cardiologist and geneticist at the University of Pennsylvania quoted in New Scientist, anomalies in the genomes of gene-edited children are very likely:

CRISPR is often referred to as molecular scissors, but this implies a level of precision that it does not have. Rather than cutting a precise point in a page like scissors would do, it is more like tearing through the page.

Even without gene editing, assisted reproduction is far from predictable; the latest statistics from the U.S. Centers for Disease Control show that only about 25% of ART cycles result in a live birth. The stated assumptions of the survey are tendentious in the extreme.

Nevertheless, for what little it is worth, germline modification for a severe muscular disease was the most acceptable alternative offered in the survey (69% for the larger sample), followed by an infectious disease (40%) and intelligence (9%); the relative order is worth noting. As a group, those who participated in discussions generally did not change their opinions much (there was a very slight tendency towards acceptance of the technology) but did become more aware of the issues and the spectrum of opinions.

Across the Channel, the British Progress Educational Trust (PET) is celebrating its 30th anniversary. PET’s stated mission is “to educate and to debate the responsible application of reproductive and genomic science.” If for “educate and debate” you substitute “promote” and you take a cynical view of the term “responsible,” you might better describe PET’s activities in practice. They lobbied in favor of the 2015 change in UK law that allowed experiments on “3-parent babies” (none of which seem to have appeared). Now they are preparing to lobby for further changes in the Human Fertilisation and Embryology (HFE) Act, which are expected in the near future. The original Act set up the UK regulations for fertility treatment and for embryo research, administered by the Human Fertilisation and Embryology Authority (HFEA).

As part of their anniversary celebration, PET commissioned a survey by IPSOS, which led to a report (pdf) published in June 2022: Fertility, Genomics and Embryo Research: Public Attitudes and Understanding. It covered a variety of topics, including attitudes to the National Health Service’s funding of fertility treatment, which is widely supported and was the focus of the press release issued by PET. The report generated little notice in UK newspapers, presumably because the subject matter seemed rather technical. The Guardian, however, picked up on quite another issue:

Well, at least the writer looked at the report. But the newspaper does not mention the data in that section that PET chose to highlight, which is that they are “concerned to see such low levels of understanding of the term ‘human genome’.” The poll asked respondents to choose:

Which, if any, of the following do you think describe the term ‘human genome’? (Please select all that apply.)

The first three were accepted as correct. 43% of respondents got none of them.

As to the “designer babies” results, the questions were accompanied by the footnoted comment:

They didn’t even bother to say “safe and effective” but just assumed it. The Guardian (but not the PET report) did at least add:

In the UK and many other countries it is illegal to perform genome editing on embryos that are intended for pregnancies, but the restrictions could be lifted if research shows the procedure can safely prevent severe diseases.

It is true that in the poll a slim majority favored using genome editing “to help eliminate a severe or life-threatening condition (such as cystic fibrosis) in the resulting child, where there may otherwise be a predisposition for that child to have the condition.” 53% supported that, only 14% opposed it, and about a third responded don’t know, won’t say, or neither support nor oppose.

It is notable that — like the Dutch poll and so many other studies of public opinion on heritable human genome editing— the survey failed to mention embryo screening or other alternatives to heritable genome editing that would prevent passing on a genetic condition. But when considering whether “to help ensure that child has a particular preferred characteristic (eg, physical traits like eye colour, height, hair colour, etc),” overall opposition led by 50–20, with 30% responding don’t know, won’t say, or neither support nor oppose.

Hardly a ringing endorsement of the goals some scientists seem to have.