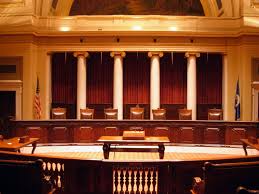 Here’s a double-negative brain twister with potentially huge financial ramifications and a Nobel Prize resting on the answer: For an invention to be “nonobvious”—and therefore patentable in the United States—should there be no guarantee of success when researchers embark on experiments that lead to the invention?

That mind-bending question was the centerpiece of a case heard today by the U.S. Court of Appeals for the Federal Circuit in Washington, D.C., over the lucrative patent portfolio surrounding the revolutionary genome editor commonly known as CRISPR. This 2-year-old intellectual property battle pits lawyers from the University of California (UC) against litigators from the Broad Institute in Cambridge, Massachusetts. Both teams represent groups of researchers from several institutions who claim to have made the key discoveries that allow CRISPR, which bacteria naturally use as an immune mechanism, to make precise cuts in the genomes of mammals—technology that ultimately may pave the way for new medical treatments. The invention has spawned several companies, and many expect it will lead to Nobel Prizes for the key scientists.

The studies were published this month on...