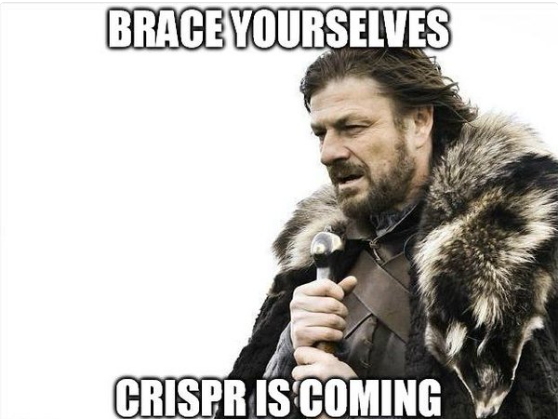 Do you remember #CRISPRfacts? Trending on Twitter in late July 2015, #CRISPRfacts emerged as a string of jokes and memes making fun of the hype surrounding the controversial new gene editing tool CRISPR.

With CRISPR all over the news these days, it made me wonder: Whatever happened to the humorous hashtag? And what deeper meaning, if any, can we take away from it?

As CGS’ Jonathan Chernoguz reported in July 2015, #CRISPRfacts arose as many social media hashtags do: using a little wit to put people back in their place when they’ve crossed a line. 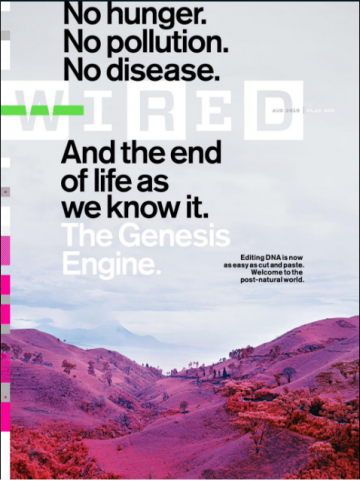 That summer, WIRED Magazine debuted their August cover story on CRISPR with the bold headline, “No hunger. No pollution. No disease. And the end of life as we know it: The Genesis Engine,” followed by the sub-headline, “Editing DNA is now as easy as cut and paste. Welcome to the post-natural world.”

Despite being catchy, these headlines simply weren’t true, and two scientists decided to call WIRED out on it. As Daniel Macarthur, a geneticist at Harvard Medical School and MIT’s Broad Institute, commented on Twitter, “Wired maybe overhyping CRISPR just a *little* bit.” His colleague Chris Dwan quickly issued a response tweet mocking the CRISPR hype with a computer science joke that exaggerated the power of CRISPR, and the #CRISPRfacts hashtag was born. 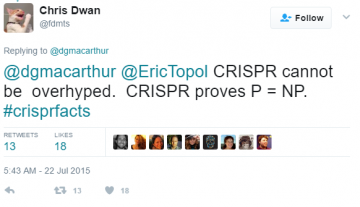 As Chernoguz noted, this small joke quickly spread across Twitter, generating over 1,500 tweets in just a few days. The opportunity to contribute to a humorous take down of an overhyped new technology like CRISPR proved irresistible.

Some people, including CGS, used the hashtag to signal the dangers CRISPR poses, including the threat of making the dystopian film GATTACA a reality, and of the technique’s inevitable off-target effects. 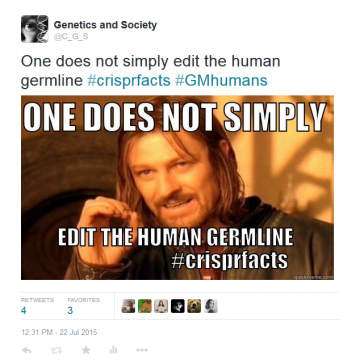 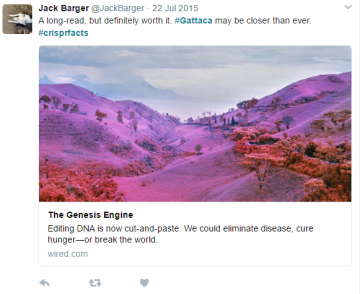 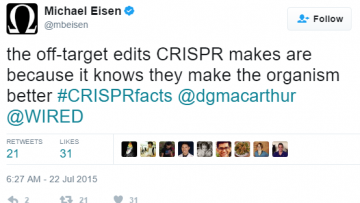 But the majority of tweets mocked the CRISPR hype in the vein of Dwan’s original tweet, by satirizing the technology’s “omniscient” power. Twitter users engaged in a stream of creative production that drew on many existing internet joke and meme cycles. These included pop culture references to Willy Wonka; the inimitable Chuck Norris; and, (my personal favorite), insinuating that CRISPR holds the key to unlocking the secret behind Donald Trump’s hair. 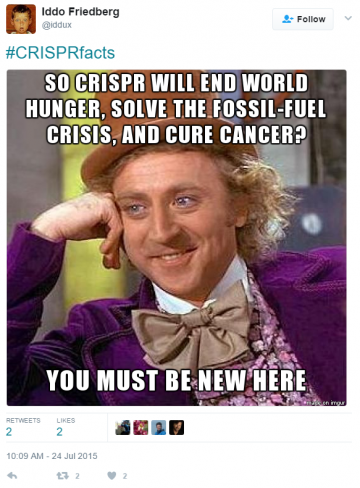 Days after the Twitterstorm subsided, #CRISPRfacts had, indeed, “turned down the CRISPR hype.” 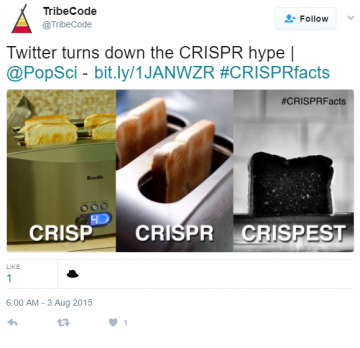 But as Chernoguz wrote, while “it was great to see the hype bubble pierced,” it was “a little worrisome that few of the tweets acknowledged any problem with CRISPR beyond the hype.”

The original hype had dissipated—at least until the next CRISPR controversy emerged.

Rumors began circulating of a potential Nobel Prize for the three scientists involved in the tool’s discovery—Jennifer Doudna, Emmanuelle Charpentier, and Feng Zhang. But when a patent dispute erupted between these scientists in January 2016, the satirical depiction of #CRISPRfacts rose like a phoenix from the ashes.

Who has the right to say they discovered CRISPR?

The same month the patent dispute began, Eric Lander, President and Founding Director of the Broad Institute, published a piece in the journal Cell trying to set the record straight. For Lander, Zhang deserved the lucrative patent. There was just one catch: Lander was Zhang’s de-facto boss, and Cell published the piece without an accompanying conflict-of-interest statement.

Criticism of Lander’s piece erupted on Twitter, and, once again, people used #CRISPRfacts to highlight the latest controversy. The hashtag re-entered the fray with the tweet, “CRISPR is so powerful it can edit its own history.”

In the first round of #CRISPRfacts, we saw the public calling out the exaggerated promises of a new technology. Here, we see them calling out the conflicts of interest in science that are all too often obscured. When billions of dollars are at stake, such conflicts often go unmentioned as histories are silently rewritten.

But not in this case, thanks to #CRISPRfacts.

After the initial patent dispute, #CRISPRfacts again petered out, garnering only one or two tweets per month. Does this mean nothing big has happened with CRISPR since? Definitely not.

One of the major developments in the CRISPR story is the National Academy of Sciences and National Academy of Medicine’s Report on Human Genome Editing that was released in February. As many noted, the NAS report, while couched in language about caution, in fact recommends throwing open the door to human germline modification, advice that radically diverges from the widespread international agreement that interventions in the human germline should remain off limits.

This is a big deal! So where was #CRISPRfacts to bring wider attention to the issue? So far, it’s nowhere to be found.

#CRISPRfacts is significant in that it gave Twitter users the opportunity to take a witty jab at CRISPR, and by extension, at the wild promises of science and technology and the hidden agendas that shape them. Through humor in the form of a trending hashtag, the wider public had the chance to learn about a complex technology and critically engage with how it is discussed, in ways that may not have otherwise been possible.

Even though use of #CRISPRfacts has largely subsided, the hashtag remains an important example of the creative ways to resist hype about powerful technologies that are too often lauded without due attention to their risks and ethical implications. An important tool of resistance both historically and today, the potential of humor too often goes unrecognized. As CRISPR gains scientific and commercial momentum, now would be a good time to consider the creative, and even humorous, ways we can name the dangers of genetically modifying ourselves and the species around us.