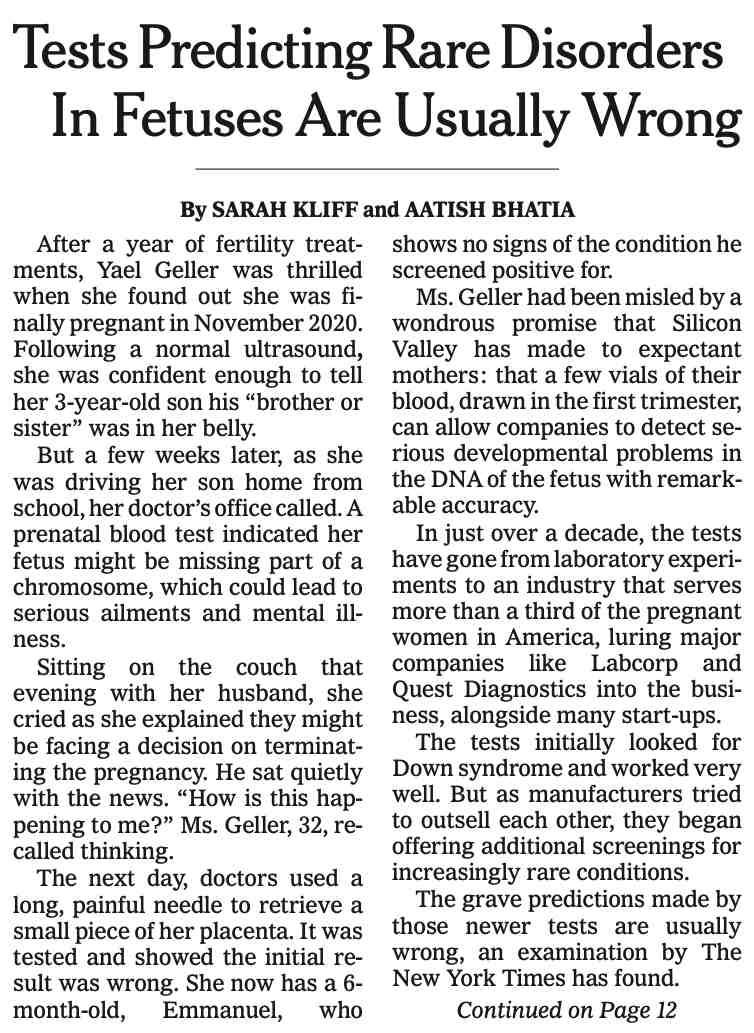 The tests they discuss are cell-free DNA (cfDNA) tests, which analyze blood sampled from a woman who is at least 10 weeks pregnant to screen for certain genetic anomalies in the fetus. If there is a “positive” result, a diagnostic test is recommended to determine whether the condition is actually present. The distinction between screening and diagnostic tests can be confusing, which is why the Mayo Clinic, for example, insists on “adequate counseling regarding the options, benefits and limits” of early-pregnancy screening and diagnostic testing. The American College of Medical Genetics and Genomics (ACMG) has surveyed the field and concluded: “No company adhered to all laboratory guidance.”

The Times article’s opening paragraphs appeared on the front page of the Sunday paper (continued on page 12) with a tighter version of the headline: “Tests Predicting Rare Disorders In Fetuses Are Usually Wrong.” The Times published a podcast, with transcript, of an interview with Kliff, who also contributed a succinct seven-slide summary to the Times Upshot under the explanatory headline, “I Investigated the Prenatal Testing Industry.”

As presumably intended, controversy ensued. The Times published seven letters on January 8th, carefully selected for balance. Most were, overall, supportive of the article while raising relevant concerns that had been omitted, especially about “the common assumptions about disabilities that these companies exploit.”

The lead letter, however, was a magisterial critique from Susan Klugman, president-elect of the American College of Medical Genetics and Genomics. She bluntly asserted that the word “wrong” in the title is misleading, since these tests are for screening, not diagnosis. In fact, the article makes this clear, puts it in the context of testing companies’ marketing language about “reliable” and “highly accurate” findings, and stresses that “the follow-up testing doesn’t always happen.” The women interviewed who had received false positives “said the experience was agonizing.” Worse:

Eight [of 14] said they never received any information about the possibility of a false positive, and five recalled that their doctor treated the test results as definitive.

Unfortunately, some commenters on Twitter either failed to read the article carefully or failed to empathize with the women struggling to understand the test results. “Seems overblown,” wrote Stanford bioethicist Hank Greely (who does tend to default to that position). Greely acknowledges that the “psychological impact on the parents can be a real problem,” but says he’s “sure” that the companies and obstetricians stress the need for follow-up with screening tests. He references no evidence for this assertion, which was echoed in a few other Tweets and refuted in the article itself. “Overblown” seems more appropriate for the criticisms of the article.

There were, however, constructive and important reactions, notably from genetic counselors Robert Resta (emeritus) and Katie Stoll. Both pieces are worth reading in full. Resta concedes that the use of “wrong” could be seen as problematic, but focuses on the deeper questions that the article did not even attempt to address, such as: Should we test prenatally? What criteria should be used to decide what conditions should we test for, and why? “Realistically, with a few exceptions, is there any purpose beyond selective termination?” He stresses the need for “soul-searching exploration with partners and care providers” and does not overlook the fact that “many patients will misinterpret, forget, and misunderstand most of the technical information” presented to them. Also:

What message does it send to people with disabilities, their families, and their advocates if we continually add, seemingly willy-nilly, more and more genetic conditions to the prenatal testing list? … And when you start testing lots of pregnancies for lots of conditions, you start creeping further into eugenic territory. There are no easy solutions to any of these questions.

Stoll has been skeptical of the routine use of early prenatal tests for rare conditions for years. In response to the current controversy, she is brutally pragmatic, writing that “the labs that sell these tests are largely motivated by profit.” Her Twitter comment sums up one line of criticism succinctly:

I am puzzled by the backlash from our clinical community. Why aren't we directing our outrage to the fact that labs have pushed expanded cfDNA screening for 8 yrs w/ misleading marketing & reporting, even though @acog & @theACMG have advised against inclusion of microdeletions?

A little web research confirms that the money involved is indeed significant:

As of April 2021, there were 5,629 certified genetic counselors in the U.S., according to the National Society of Genetic Counselors Professional Status Survey, and the number is growing; by 2030 there may be over 10,000. About half report their area of practice to include prenatal or preconception/reproductive screening, and nearly a fifth of all respondents work for commercial, non-academic, diagnostic laboratories.

Controversy about these tests is far from new. George Estreich wrote for this publication in 2012 a remarkable three-part series (1, 2, 3) titled “Anatomy of a Webpage,” which opened with “Marketing Fetal Gene Tests and Sequenom’s MaterniT21.” Estreich is a poet whose lauded memoir, The Shape of the Eye, described in loving detail his family’s complex response to their daughter’s diagnosis with Down Syndrome and her development as a unique, quirky, and lovable child. The themes of the “Anatomy” series are further explored in Estreich’s 2019 book, Fables and Futures: Biotechnology, Disability, and the Stories We Tell Ourselves, which CGS was delighted to help promote.

The most important issues here are not actually the technology, significant though it is. They involve the marketing and regulation of its application, and the social assumptions and policy directions it shapes. The companies who develop and perform the tests clearly deserve increased oversight, as does the entire industry that has grown around reproduction over the last few decades. We have already seen fertility clinics selling predictive tests that purport to advise future parents on the “best” embryo(s) to select and develop. With the continuing development and use of gene-editing tools, it is increasingly plausible that someone will try to sell gene-edited embryos, “designer babies.” Oversight and regulation of the fertility industry remain urgently required.