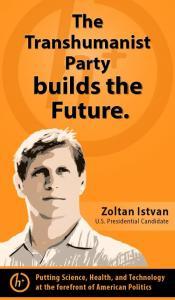 Zoltan Istvan was the founder of the U.S. Transhumanist Party, and still owns the trademark, though his own most recent run for President was as a Republican. The Transhumanist Party in 2020 nominated Johannon Ben Zion, apparently to avoid running a candidate associated with Jeffrey Epstein, who in between molesting minors generously funded Humanity+. They then rejected him when he filmed himself eating “lab-grown human meat,” cultured from his own skin. (Shades of Soylent Green!) He was replaced by Charlie Kam, the very model of a singularitarian, as he once sang. Kam gathered 53 votes from 24 states as a write-in candidate.

Jonathan Matthews of GMWatch, who documented the ructions over the party’s 2020 Presidential candidate, alerted me to a post-election rumination by Zoltan, which he posted both on his Facebook page and his Twitter feed. Here it is, in its remarkable entirety:

I just took the NY Times “Find Your Place in the Vaccine Line” report. After entering info on my person, my age (47), & health, I’m near last on the list in the US for a Covid vaccine. Prisoners and the homeless are way (months) ahead of me. I worked hard in business for years & paid 7 figures+ in taxes to the USA. I’m disappointed in the seemingly unfair process of my being relegated to the back. I have to commit a crime & go to jail, or become obese, or smoke cigarettes, or live in the ghetto to move up in the vaccine timeline. But of course the burden of paying for the creation & distribution of the vaccine mostly falls on people like me who pay the bigger share of America’s taxes. Here’s my solution: I agree with giving the vaccine away to those in immediate need, but there should simultaneosly [sic] be an open market where the vaccine is also “for sale” to the public (maximum single dose course per buyer).

I hate that someone like you, who only wishes advancement for themselves as opposed to the human race as a whole, is one of the very few better known voices for transhumanism. This tweet is disgusting and exemplifies the opinion I already had of you.

Zoltan did, however, attract some support. One tweet helpfully explained:

The Globalists are basically getting the “useless eaters” first—probably a test run for any vaccine injuries bec they won’t have $$ to sue, then eventually they get the rest of us once they deem we’re not useful anymore. It’s a way of culling the rest of whoever is left on [image of earth].

Zoltan’s idiosyncratic approach to political solutions is not a recent inspiration. When he was running for Governor of California in 2018, as a Libertarian (he finished 15th of 32, with 14,462 votes), he wrote a piece in TechCrunch that provocatively suggested that:

California could potentially cut deals with the federal government to lease its empty land and natural resources to help pay for a basic income.

Taxes are of course anathema to libertarians, and this is his way of squaring the circle. It’s genius, or at least ingenious. And about as realistic as most transhumanist fantasies.

Istvan has no chance of being elected to any important office in the foreseeable future. But his unusual mix of transhumanist and libertarian fantasies could perhaps catch on in the post-Trump era. If that happened, this clown could be a serious menace.