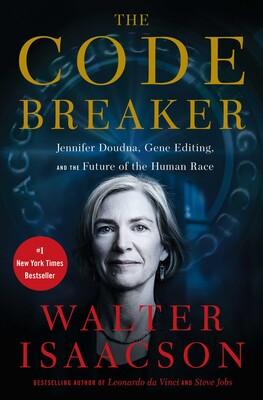 Not surprisingly, Walter Isaacson, bestselling author and former Time editor, has the style down pat. A sometimes breathless, technocratic enthusiasm; an ability to reduce characters to a few key gestures (bright smile, wary eyes); an overblown big man (or, in this case, big woman) approach to history. In his new offering, The Code Breaker, Isaacson tells the story of the discovery and development of CRISPR gene-editing technology from the vantage of Jennifer Doudna, the UC Berkeley biochemist who shared the 2020 Nobel Prize in Chemistry with French researcher Emmanuelle Charpentier for their work on the structure and function of this molecular system. (1)

Undoubtedly, Isaacson tells the tale with flare and he has exhaustively researched the story, talking to dozens of scientists in the U.S. and E.U. and reading a raft of scientific papers. But his narrative is deeply conflicted, in that it seems to be informed by two very different mental models about how science is done. The first is that old, triumphal model, in which scientists are towering heroes of the modern age, unlocking nature’s secrets via brilliant minds and indomitable drive.  The other model, owed largely to work of scholars in the fields of sociology of science and later science and technology studies, recognizes, among other things, that scientists are people given as much to pettiness, self-interest, and competitiveness as the rest of us; that scientific discovery unfolds within structures and institutions that shape goals and outcomes and have their own economic and political logics; and that findings occur over time in complicated ways involving a host of characters and often cannot be attributed fully to one person or another. As a result, Isaacson weaves a confusing path, on the one hand pushing Doudna to the fore, on the other undercutting the assumption of her importance.

Why did Isaacson make the journalistic choice to focus on Doudna? Clearly, he is well aware of the cautionary tale of Rosalind Franklin, the British crystallographer whose essential work on the DNA molecule made possible Watson and Crick’s brief bombshell of a letter to Nature in 1953, “Molecular Structure of Nucleic Acids”—but who was largely ignored by the media and died before Nobel glory fell upon her male collaborators. Perhaps his choice is meant as a kind of payback to women scientists who so often in history have been given short shrift? That makes little sense, though: Doudna is no Franklin. She has run a successful lab at Berkeley for years on a steady stream of federal grants, received numerous accolades for her work starting early in her career, and has been in the media limelight from early on. In 2000, when she was an associate professor at Yale, Discover magazine named her one of 20 young scientists to watch.

Maybe Isaacson thought a big, windy doorstop of a book would not carry readers unless he had a compelling central figure. In fact, the chronological account of CRISPR research provides narrative propulsion in its own right, given the assorted characters involved and the many disputations—both academic and legal—as the players fight, connive, and spin for recognition of their precedence and the primacy of their patents.

By returning repeatedly to Doudna, he puts himself in the sorry position of having somehow to determine which of the scientists he sides with and which he doesn’t, even while he strives to attain objectivity. (Sometimes, as with his characterization of Broad Institute director Eric Lander, who has been vocal in his opposition of modifying the human germline, one wonders about the degree of that objectivity.) Isaacson portrays Doudna as naïve in terms of business (“did not know much about patents” p. 233), overmatched by Machiavellian double dealers (“You stabbed me in the back” p. 211), mistreated by assorted collaborators (“Doudna never quite understood Charpentier’s proprietary feelings and couldn’t figure out how to deal with the coolness that was evident beneath her warm and insouciant manner” p. 216), and subject to occasional paroxysms of anxiety.

Early on in the media coverage of the CRISPR-Cas9 work, Doudna’s dream was often reported. It became a kind of talisman, a mighty signifier of her ethical concern about the uses to which her work might be put. You know the dream. Isaacson has a version (p. 283), but here’s another from a 2014 New Scientist article by Matthew Nisbet:

[A]s applications related to modifying human genes were soon reported in the scientific literature, Doudna began to worry. In the dream, a colleague asked if she would help teach someone how to use CRISPR (Clustered Regularly Interspaced Short Palindrome Repeats). She followed him into a room to be greeted by Adolph Hitler wearing a pig face. The nightmare reinforced her belief that public discussion of the technology was far behind the breakneck pace of its emerging applications. She feared a public backlash that would prevent beneficial forms of gene-editing research from moving forward.

Isaacson underscores Doudna’s ethical concerns by showing her testifying before Congress about costs of CRISPR treatments, voicing fears about biohacking at a 2014 conference, and setting up an Asilomar-like conference in 2015 in Napa Valley. Writes Isaacson, “At Asilomar [in 1972] the discussions had been mostly about safety, but Doudna made sure that the Napa conference tackled the moral questions.” (P. 287)

The resulting discussion of said moral questions? A report to Science advocating “a prudent path forward,” rather than any kind of moratorium or ban on research.

After giving overviews of several conferences, including the 2015 National Academy gathering that attempted to muster a diversity of opinion by inviting not only scientists, but also members of the social science community involved in advocacy and research on disability and women’s reproductive rights, justice, and systemic racism, Isaacson makes his own survey of ethical concerns. As he does so, he lands at one point in the Cold Spring Harbor, NY kitchen of an aged James Watson. The rationale for this interlude is entirely perplexing, as Watson initially proclaims the importance of using CRISPR equitably, then proceeds to hoist himself on his own petard again by dithering off into IQ and race. Added to the mix is Watson’s son Rufus, who listens to the interview. Isaacson reports that Rufus declares himself “dim” and quotes him saying, “I’m a burden on my parents because he’s successful, and he deserves to have a successful child.” (p. 393) This scene should have wound up on the cutting room floor, as should the passage in which Isaacson says Doudna felt discriminated against growing up in Hawaii because she was white.

It bears noting that despite Isaacson’s efforts late in the book to lay out a probative set of concerns about CRISPR, he occasionally gives away his uncritical pro-science bent. On page xvi, for example, he reduces the global response to the first instance of the gene editing of human embryos to the following: "There was an immediate outburst of awe and then shock. Arms flailed, committees convened. After more than three billion years of evolution of life on this planet, one species (us) had developed the talent and temerity to grab control of its own genetic future."

The dismissiveness and sarcasm here is unmistakable. Look at those poor folk unrecognizing of the exceptional accomplishment of us clever apes! Look at them balking at the astonishing, godlike powers our species has developed! Look at them trying to hold back the brilliant and brave scientists brilliant and brave enough to manipulate genes! Add to such passages the book’s significant failure to fully describe the policy structures and strictures already in place across the globe: Isaacson only glancingly addresses the fact that at least 70 nations already have laws banning such interventions, as found by this multi-authored study in The CRISPR Journal. Effectively, Isaacson treats the debate over these issues in much the same dramatic fashion as he does the race among scientists to elucidate CRISPR’s structure and function, robbing the question of creating genetically altered future generations of the seriousness it deserves.

Isaacson has no doubt that the “invention of CRISPR and the plague of COVID will hasten our transition to the third great revolution of modern times. These revolutions arose from the discovery, beginning just over a century ago, of the three fundamental kernels of our existence: the atom, the bit, and the gene.” Those are certainly a technophilic fundamental three kernels. Why not brain, body, spirit? Ego, id, superego? Individual, family, community? City, state, nation? Me, myself, and I?

In a post-pandemic Epilogue, Isaacson sees “the promise of CRISPR more clearly than the peril,” and in the end envisions us “asking what type of world we want to leave for our children. Then we can feel our way together, step by step, preferably hand in hand.” To which one asks, once again, who is “we” and what constitutes “our” interests?

Perhaps one cannot expect a book written and edited with an eye to best sellerdom, one with an unmistakable tendency to glamorize science, and one scientist in particular, to assess with all due seriousness the ethicality, suitability, and legitimacy of a critical technology that stands to alter (possibly irreversibly) lines of human genetic inheritance. Rather than facilely dismissing flailing arms and convened committees, Isaacson would have served his readers far better had he honestly and forthrightly discussed the mechanisms that might be deployed to carry out a fair and just assessment of the impact of CRISPR, and had he given greater weight to the current state of widespread international opposition to the use of this technology for germline alterations.

(1) Full disclosure: I am a former Time, Inc. staff writer, so some of my own writing can be tarred with the same brush.  Further, I am an alumna of Doudna’s alma mater, Pomona College; however, that doesn’t bias me in her favor: in fact, given their repeated efforts to use her Nobel Prize as a way to beg more money from me, I may lean the other way.

Gina Maranto is Director of Ecosystem Science and Policy and coordinator of the Environmental Science and Policy program at the University of Miami's Leonard and Jayne Abess Center, a fellow at the Center for Genetics and Society, and author of Quest for Perfection: The Drive to Breed Better Human Beings (1996).

Here’s How AI Is Helping Make Babies By Revolutionizing IVF

One in four couples in developing countries is impacted by infertility. About 48.5 million couples experience infertility worldwide. Today, infertility is rapidly becoming an epidemic.

In vitro fertilization (IVF) is a technique that helps people facing fertility problems have a...

Photo by Testalize.me on Unsplash

Ann was 15 weeks pregnant with her fourth child when the results of her prenatal genetic test came back last August. The test suggested that her daughter, whom she and her husband planned to name...