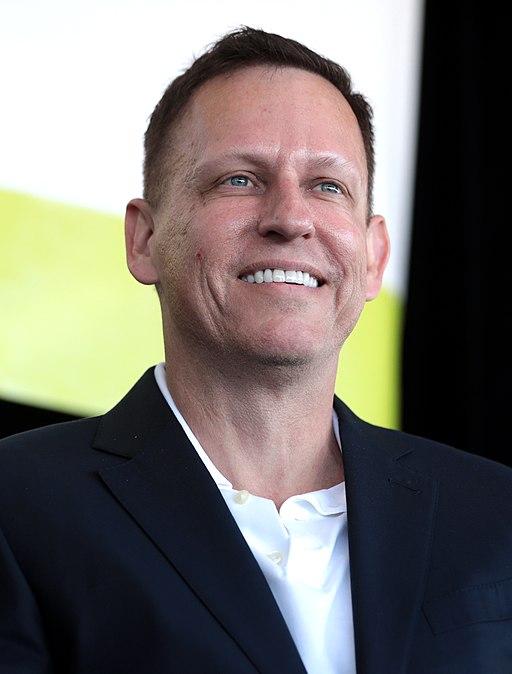 Peter Thiel is not just a tech billionaire; not just a far-right libertarian; not just a transhumanist (Biopolitical Times has occasionally covered his antics); and not just the co-founder of Palantir, a “creepy” company that analyzes personal data for governments (sometimes essentially for free) and presumably keeps a copy. He is also the Silicon Valley mogul who most ardently supported and financed Donald Trump in 2016, even speaking at the Republican convention.

Thiel is a selective but major funder of Trump-loving candidates running in 2022, which may have something to do with his quitting Facebook’s Meta’s board, to make it easier for his preferred candidates to take his money. He has already handed out more than $20 million in total, to at least 16 Republican candidates who are campaigning as supporters of The Former Guy. This recent activity has drawn the attention of both The Washington Post and The New York Times, which quoted him on Valentine’s Day:

“My somewhat apocalyptic, somewhat hopeful thought is that we are finally at a point where things are breaking.”

He hopes that the United States is “on the verge of a momentous correction.” According to Steve Bannon, the eccentric who used to be Trump’s strategist, “Peter wants to change the direction of the country.” Indeed, and he has for a long time. In 2009, Thiel wrote an essay titled “The Education of a Libertarian” explaining that “I no longer believe that freedom and democracy are compatible.” And if one of them has to be jettisoned, well:

“I remain committed to the faith of my teenage years [the 1980s]: to authentic human freedom as a precondition for the highest good.”

Thiel pulled himself up by his bootstraps to enormous wealth (estimates range from 4 to 8 billion dollars), relying only on a Stanford education and “a modest venture fund with $3 million in friends-and-family money” or perhaps as little as $1 million. He rode the tech boom of the late 1990s with PayPal, and bowed out in 2002 with $55 million. Half a million bought him 10% of Facebook, which he sold for a billion dollars ten years later, though he stayed on the board until this month. Clearly, he must be the smartest — that is, best — man in the room. His essay continued:

“I stand against confiscatory taxes, totalitarian collectives, and the ideology of the inevitability of the death of every individual.”

Live forever — now that’s an ambitious goal. According to a 2015 profile in Inc., Thiel has been “disturbed” by the prospect of life having an expiration date since he was three years old. That has led him to view death as “a problem to be solved” and to fund the now-disgraced Aubrey de Grey, as well as more conventional scientists such as Cynthia Kenyon. There were several stories about Thiel being infused with young people’s blood, but they have since been denied by the company, Ambrosia, set up to do exactly that. (The FDA seems to have frightened them out of business but they briefly bounced back as Ivy Plasma.)

Just in case he can’t become immortal, he has explored other options for sitting out the apocalypse. In 2011, he put a little cash, less than $2 million, into “seasteading” — a project to exploit the mainland economy while living outside territorial waters on an artificial island. Around the same time, he acquired a bolthole in New Zealand, and reportedly became a citizen despite not formally qualifying; he recently sold the mansion.

Thiel secretly financed the lawsuit that in March 2016 put Gawker Media out of business, and then called it “one of my greater philanthropic things that I’ve done.” Which is odd since everyone seems to accept that the real reason was that Gawker had previously embarrassed him by outing him as gay in 2007, and calling him “paranoid about its discovery.” He sure showed them, eventually. Since then, he has been out and proud, as he told the Republican convention in July 2016, and indeed married a man in 2017. Evidently freedom, in Thiel’s philosophy (if we may call it that) is a function of the individual, and in particular himself.

Old-fashioned eugenicists wanted to improve the herd by culling the weak and mating the worthy. Their modern successors don’t even bother with the unworthy rabble; they just want to make themselves and their offspring “better” — smarter, stronger, healthier. The implicit assumption is that the aristocrats deserve their status and the peons should be grateful for table scraps. Not that anyone (except perhaps Peter Thiel) would say so exactly.

Thiel is a menace to society, and proud of it.

Simone Collins knew she was pregnant the moment she answered the phone. She was on her sixth round of in vitro fertilization treatments and had grown used to staffers at Main Line Fertility starting...

In clinics today, fertility patients using in vitro fertilization (IVF) are routinely advised to pay for an expensive supplemental test called preimplantation genetic testing for aneuploidy (PGT-A), in which a handful of cells are removed from the embryo to examine...