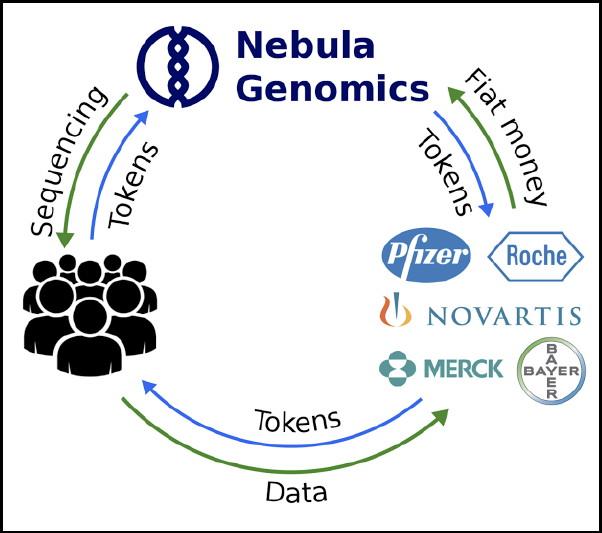 The launch of a genomics company with a difference was announced earlier this month. The individual customers who sign up to have their genomes marketed by Nebula Genomics will own their own data, keep it private and rent it to researchers and drug companies, fully anonymized. At least that’s the idea. The company aims to combine state-of-the-art genome sequencing with blockchain technology, the power behind the hugely hyped “digital currency” Bitcoin.

This approach has some practical problems, discussed below, and also raises some important social and governance issues. For instance: Should the human genome, in all its somewhat varying forms, properly belong to humanity in general, as the 1997 UNESCO Universal Declaration on the Human Genome and Human Rights suggests? If so, what should that mean for the governance of massive databases of human DNA sequences? Conversely, should the human genome be both individualized and commercialized? Is it appropriate that there should be a private, commercial definition of the common good? Should there be a public responsibility to monitor genomic predictions and ensure that counseling is available? Moreover, should societal resources — public or private — be diverted to genetic research away from, say, public health measures, education and infrastructure?

These questions should inform any discussion of these commercial and technological endeavors to create valuable resources based on the human genome — endeavors that are, in fact, not all that new. Other scientist-entrepreneurs have previously suggested the combination of blockchain and genomics (1, 2, 3, 4, 5), and Nebula is not the first company in this space. Gene Blockchain was launched in 2013, claiming to be the “World’s First Human Genome Blockchain.” Others include Encrypgen, Luna DNA, Longenesis, and Zenome, which instructs us that “The future is already here. You have almost missed it. Jump in.”

But Nebula made a bigger splash, doubtless because it was co-founded by George Church, the Harvard and MIT professor who has been disrupting genomics for 40 years. The company is partnered with Veritas, another Church genome company, and Enigma, a company founded by MIT graduates that “aims to solve the two biggest problems for blockchains: scalability and privacy.” (Church himself modestly disclaims any expertise in blockchain.)

Nebula thinks the time is definitely coming for consumer-focused whole-genome analysis, predicting it will be priced below $100 “in a few years.” Church has long been an advocate of fully sequencing everyone’s genes, and in 2005 launched the Personal Genome Project (PGP) as a start. Its first goal was to sequence 100,000 genomes, hailing from carefully briefed volunteers who were willing to share the results publicly, along with phenotype data, for research. After 12 years, however, only about one-tenth of that number had signed up.

Why this reluctance? To the amazement of almost nobody, the key reasons were price and privacy, according to a survey by Nebula, as reported in their White Paper. (It’s unclear how many respondents replied “both” but each reason was cited by 29% of the 402 participants.) One third of respondents would be willing to pay $100 to have their genomes sequenced, and another third $200. If prices continue to fall, as Nebula predicts, this suggests that the price problem may disappear relatively soon, leaving privacy as the main issue.

Blockchain provides one solution. Anonymity has always been part of its attraction, which is why modern criminals use cryptocurrencies based on blockchain. (Note: Criminals also use cars and phones and so on; there is nothing unlawful about the technology itself.) If you use blockchain and related programs, you should be able to keep your genome, once you have it, digital and private. And that leads to another conceptual leap.

It has always been a bizarre triumph of corporate lawyers, on the one hand, and marketing redirection on the other, that the business model for genetic testing companies depends on reselling their clients’ data; in fact, that they own it at all. Direct-to-consumer genetic testing companies, such as 23andMe and Ancestry.com, charge customers modest amounts for limited genetic analysis. They then resell the information from their growing genetic databases to pharmaceutical and biotech companies for millions of dollars.

That model raised a question that is perhaps obvious in the new gig economy: Why don’t the clients own their own data? Then they could rent it out themselves!

This would have been impractical before the advent of three technical developments: crypto-storage, known as wallets (an amusingly anachronistic term), which remain private on the blockchain; very high-speed internet; and equally fast access to vast, sophisticated databases. With those tools in hand, it becomes possible to connect researchers based in large companies or other entities with thousands of individuals very cheaply and easily, for the temporary use of each one’s specific genome. Big Pharma could put out a call for (say) 50-to-60-year-old males with Parkinson’s and no other notable diseases, and offer to pay them whatever the going rate might be for access to their genomes.

But who they gonna call? If Church and colleagues have anything to say about it, Nebula!

Here’s where the Nebula project begins to go off the rails, in my view. According to the proposal, the storage of genetic data will be decentralized, which shifts that cost onto the individual customers (who, of course, are also the providers of the raw materials that make this whole scheme work). This clearly benefits the company.

Furthermore, if I am reading the White Paper correctly, the phenotypic data generated by questionnaires will also be stored by those individuals, probably on a file-storage service such as Dropbox (suggested on p. 18 of the Paper). But the buyers — envisioned as researchers (who may get reduced rates) and pharmaceutical mega-corporations — will go through Nebula to find this data. Nebula’s value-added will be to tell them which genomes to ask for.

But when it comes to the financial reality behind the business model, there is a critical chicken-and-egg problem. The corporate buyers pay Nebula in cash — fiat money is the jargon — but all other transactions are conducted in Nebula tokens, a proprietary cryptocurrency (see p. 14; Figure 6B is reproduced above). According to this, the researchers’ companies remunerate the individuals whose genetic and other information they want with these tokens, which the individuals pass back to Nebula to pay for sequencing their genes. This keeps everything tightly within the Nebula system, once it is up and running. But where does it start?

Do individuals pay Nebula to sequence their genes with cash? If, as the circular figure suggests, they purchase their DNA data with tokens, how do they acquire them? And once the system is operational, isn’t it rather like the old company store for miners paid in scrip? There is, in fact, a company — DNASimple — that promises to de-identify your samples and pay you $50 each time a company wants to use them. If Nebula has solved the privacy problem, why not use cash?

As a potential individual participant in this arrangement, I remain skeptical. There are services such as Coinbase where you can covert Bitcoin and the like into cash (or buy them with cash), but they too are unlikely to work for Nebula tokens until the system is already up and running. Yet another bootstrap problem remains: which came first, the sequencing or the phenotyping? It’s the phenotype that makes the genotype valuable enough for companies to pay cash and tokens for access to it; so, does Nebula survey people for their physical, medical, and lifestyle history first and only sequence them if requested? That would seem to be an unacceptable delay, if a researcher wanted several thousand sequences to analyze.

There are even more issues. For a start, this system is almost certain to value individual genomes quite differently. It might, for example, have made Henrietta Lacks or her heirs wealthy. There was something about her cells, and possibly her genome, that was unique, or at least rare; she was a star. But how saleable would my genome be? I have a relatively unusual, late-onset disease that can be managed with a known, 53-year-old medication. I doubt Big Pharma is interested; mostly I’d be making up the numbers in any phenotypic survey, and that’s no way for me to get rich.

Practical problems that may eventually be satisfactorily addressed include reading/writing differing data formats for different systems; that’s been solved for Macs and Windows machines, for example, but remains an issue for medical technology. On the other hand, researchers and companies could rightly be wary that the population of genomes available is not fully representative, and it’s not obvious how to handle that one. Or the proprietary token market could become volatile, like Bitcoin. Perhaps worse for Nebula’s business model, if the technology becomes too cheap and the competition too fierce, individual customers may hardly benefit at all. Nebula co-founder Kamal Obbad, a Google alumnus, shrugs this off: “Essentially, people are going to be compensated at market rate, which right now is nothing at all.”

Who, if anyone, will come out on top in this particular market remains to be seen, as does the long-term reaction of governments, regulators and the general public. Nebula’s collection of experts may be the ones to hit the jackpot. Or perhaps it will be one of the other contenders. Maybe someone none of us have heard of yet.

Meanwhile, hold onto your wallet, digital or otherwise.

The company is also not allowed...

It seems digital children are the future. But if it’s that convenient, it isn’t really a child

With more and more people deciding not to have children, Catriona Campbell, author of AI by Design: A Plan For Living With Artificial Intelligence, believes that digital children, designed to resemble their “parents”...