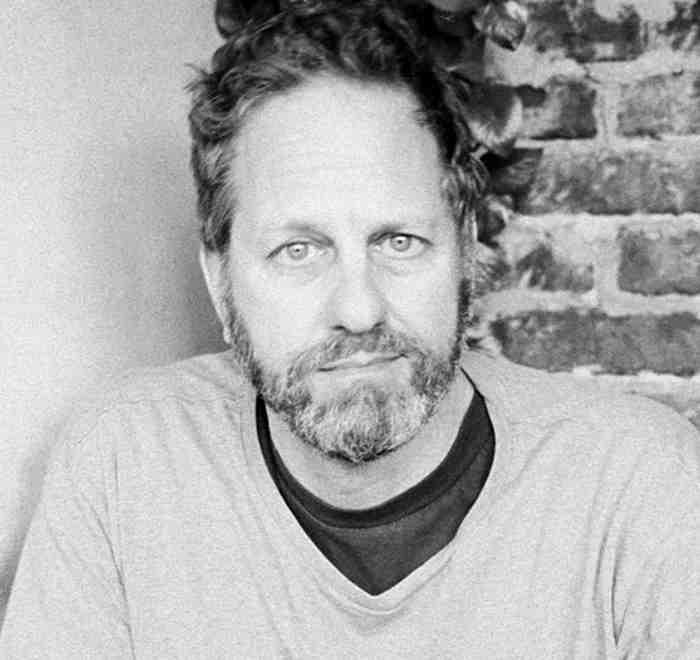 Jonathan Luskin: The three stories are sequential, and they’re all connected to a particular technology and a genetic engineering corporation. The first story is now, or slightly in the future. It’s the story of Charlie, a scientist; and her son Gary, or Wheeler as he’s known; and Morgan, a venture capitalist; and Alyssa, a chat bot. The next story, which is soon, is the social media story of Mark and Jeanine, a couple that’s afraid to have a real kid because they want it to be perfect. They’re trying a beta software app to design their kid. And in the future, when you can have a genetically engineered kid, is the story of Chase, an athlete, and his parents, Madeline and Danny.

How are the stories connected?

I wanted to show different aspects of the same theme – of this idea of perfection. One aspect is selling the idea of perfection, even though it’s not real. It’s pretty clear to me that people will be claiming advantages of genetic engineering well before there really are advantages of genetic engineering. The problem is that it will be self-fulfilling. That’s in the play: that by discussing something and naming it, it becomes real. If someone says they’ve discovered the gene to make your kid smart, it doesn’t matter if it works or not. All of a sudden, there’s a new race of kids. Racism isn’t based on anything real, so why not genetic racism not based on anything real? And we know that in our capitalist culture, there’s money to be made. There’ll be money to be made on brands that don’t mean anything.

Then there’s perfection in social media. It’s been studied that people get sad when they look at social media, because it’s all stories of great achievements. I know plenty of families who struggle very hard with their kids in all sorts of ways. But what they put on Facebook is none of that. It’s all afternoon, glowing sunlight, Maxfield-Parrish light on your family.

I also wanted to tell the story of genetic engineering that kind of works out, but leaves your body and your mind at odds with each other. Giving someone more muscle mass is probably one of the more doable things with genetic engineering. But that’s not going to make you an athlete, that’s going to make you someone with muscles, and the dissonance there could really be destructive.

And the theme of disability. There’s anger, there’s fear, there’s a lot of turmoil over just willy-nilly cleaning the human genome of anything you define as a disability. Who’s going to define that? The idea that I put pretty strongly in the play is that there’s nothing wrong with me because I’m different. That idea is still eclipsed in the able-bodied community by fear.

And then running through the stories is the theme of money. Everything is distorted by money. What would insurance companies do to get rid of genetic “defects” that would cost them money in the future? Whenever scientists want to do basic research, they talk about the advantages, about getting rid of sickle cell anemia or malaria. But what about unintended consequences? What will happen if somebody wipes out all the mosquitoes in the world – will that be a problem for the birds?

What was it like to be in the middle of writing Perfect when the news about the so-called “CRISPR babies” broke?

I always had a sense that I needed to keep this story ahead of the news. But a play isn’t really about the science. It’s about making the political personal. The play has to be about people operating in the world created by the science. For an audience, after seeing the play, the conversations are going to be about the characters, about what they wanted and why they couldn’t get it, and what their obstacles were, and their strategies to overcome them. The greatest science plays have very little explicit science in them.

I’m not saying that the play isn’t valuable for the discussion about the science. It really is, because what theater can do is put you in the shoes of someone else and let you see through their perspective. I’m trying to show the perspective of a female scientist who is older than she should be without tenure, in a lab that is poorer than it should be, and who is mistreated by her colleagues, and has a very contentious relationship with her son over the work they do together. Their world is defined by the science and by their struggle. And even the venture capitalist in the play is trying to make the world a better place in his way.

The question is, what kind of world will this science build? And what will be our experiences in that world? That’s a really different way of looking at the science than most scientists have. It’s much closer to the way that groups like the Center for Genetics and Society want to look at the science. Scientists just follow the science. And then decisions are just made. I asked a friend of mine who has a genetics lab what bioethics training his graduate students have before they get to the lab. And he said: none. They don’t have training in that. I don’t want to get down on scientists, but I do think they have a tendency to talk about the positive wonderful things that will come out of the basic science when they’re trying to get the funding. But then when things go wrong, it’s, well, it’s science, it can be used for good or bad; we’re neutral. It’s not really fair to look at it one way when you want the money and another way when things don’t go well.

What’s planned for Perfect after the Playground production in May?

I’m hoping that this play can have a life in the departments and universities that want to start conversations about what they’re doing. It’s a catalyst for them to have a conversation from a different point of view. This is where theater can help. Theater is the absolute most powerful way I know for people to see through another’s perspective, even the perspective of someone who disagrees with you – actually, most importantly, the perspective of someone who doesn’t agree with you.