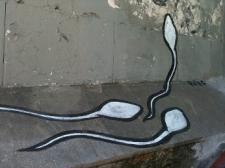 Sperm banks continue to expand their search and selection criteria to include clinically ambiguous and frankly irrelevant donor information (favorite pets, astrological sign, hobbies). Yet their failures to verify the self-reported personal and medical histories of donors have recently prompted a set of legal complaints aimed at combating fertility clinic negligence in the unregulated assisted reproduction industry in the U.S.

Several families, including Angela Collins and Beth Hanson from Canada, have recently brought a lawsuit against one Georgia-based clinic, Xytex, and one particular donor. The legal questions are themselves significant, but the case also raises important considerations around disability, class, and genetic determinism.

Xytex, along with its distributor in Ontario, informed Collins and Hanson that Sperm Donor 9623 had an IQ of 160 and was pursuing a PhD in neuroscience, and had no history of physical or mental illness apart from his father’s colorblindness. The clinic did not verify this information, but relied on what Sperm Donor 9623 had reported. The parents, now raising their young son, were understandably shocked upon learning that his donor had in fact spent time in jail and received multiple diagnoses of mental illness.

Parents’ anger, and their concern about their families’ future, should of course be recognized and respected.  But so should the complicated set of issues that this case raises. How do we assess it while resisting genetic determinism, challenging biological explanations for class-based inequalities, and critiquing a purely medical understanding of disability? How do we negotiate the differences between human variation and costly, painful, mental illness? How should we come to terms, legally, politically, and emotionally, with the responsibility – or negligence – of commercial players in the realm of human reproduction?  None of the answers are obvious.

The couples who used Sperm Donor 9623 may never have realized that he had been diagnosed with schizophrenia and other mental illnesses if Xytex had not accidentally and negligently revealed his identity in an email exchange. Three of the many families who used his sperm are now seeking to set up a fund for their children’s preventative health care and future medical costs. In addition to its part in a legal strategy, the argument for this fund brings into focus the various roadblocks that people with mental illness face accessing employment, education, and mental health services.

In most articles discussing the case, the "perfect" sperm donor that families thought they were selecting (high IQ, graduate degree, etc.) is rhetorically pit against the donor’s "actual" identity: a "mentally ill convicted felon" (1, 2, and 3). Press releases, news coverage, and lawsuits indulge in assumptions about genetic determinism and overstate the chance that the children will take on the behavioral characteristics of their sperm donor.  Though such reductive sound bites are common in media representations, they do not emerge in a vacuum and their harm extends beyond this one case. The assumptions that permeate media and legal discourse about Sperm Donor 9623 hinge in part on widespread misunderstandings of disability, poverty, and genetics. Much of the language swirling around this case creates false dichotomies between health, intelligence, and success versus illness, criminality, and failure. We all live in far greater nuance than that, whether or not we currently live with a disability, including schizophrenia.

Aside from focusing on his schizophrenia, many articles also mention the sperm donor’s felony charge, implicitly suggesting there is a link between genes and criminality (and mental illness and criminality). This is an incorrect and politically troubling connection. But it is not without its supporters. For more than a decade, Kent Kiehl, a psychologist and neuroscientist who also studies schizophrenia, has been visiting high-security prisons in the U.S., scanning the brains of more than 4,000 inmates with a mobile MRI unit, and building a database to look for genetic links to violence. Kiehl claims that psychopaths and violent people "have different brains," which are "at least 50 percent caused by genetics" and supports research aimed at studying the MAO-A gene (which has been problematically nicknamed the "warrior gene"). A more recent study on MAO-A chose as its sample the brains of 328 male children. These studies and others like them assume a lot at the outset, including that incarcerated people (and males) are inherently more violent than others, and that this is genetically pre-determined.

Many news articles about Sperm Donor 9623 also mention that he had dropped out of college, implying there are "genetic links to educational attainment." While some researchers recently touted a study that identified 74 genetic variants that influence how many years of school people finish, a closer look reveals an important caveat: those 74 genes "explain slightly less than one-half of 1 percent of the differences between people’s education levels." Given the other aspects of Sperm Donor 9623’s identity, there’s a missing discussion in the press about whether he had the necessary mental health or financial support to finish his education.

The links between genes and the likelihood of developing schizophrenia are difficult to quantify or clinically predict. Many gene clusters have been identified that may contribute to the diagnosis, and it is also believed that environmental conditions can trigger schizophrenia. The complicated state of the field has been muddled in media coverage of this lawsuit, as in one CNN article claiming that certain gene clusters cause schizophrenia 70% to 100% of the time. Critics point out that research findings are often overhyped, despite the currently enormous gap between the huge amounts of genetic information that are generated and the relatively miniscule amounts of clinically reliable advice based on it.

Being predestined at birth for dropping out of school and committing crimes is logic that sounds familiar to historians. In the U.S. alone, tens of thousands of people have been sterilized and excluded from "respectable" society through state and institutional eugenics programs because they were considered predisposed to criminality, "feeble-mindedness," and all-around substandard genetic material. Fear of disability – physical or cognitive "deviance" from what those with power have historically decided is "normal" – is wrapped up in mistrust of people who are poor or have criminal records. At the core, this anxiety continuously answers its own question: Who should be allowed to reproduce?

Nothing about this case is objective, self-evident, or easily teased apart, but the history of eugenics informs the pressures faced by families in this high-tech fertility moment. People now encounter an expanded range of options, expectations, and ways of thinking about families and reproduction. Parents understandably want the best for their children. It would be difficult, if not impossible, to not feel frightened at the prospect of a child developing schizophrenia, especially when everything around us says our functioning needs to be "normal" and when social supports are so lacking. And many would recoil in fear from a gamete donor who had dropped out of college or had prior convictions, without stopping to consider the eugenic assumptions embedded in that reaction.

The ableist and classist underpinnings behind the drive for particular kinds of gamete donors sit on a landscape defined by expectations and mechanisms of consumer-based, free market products and purchases. If assisted reproduction becomes a transaction, it can become difficult to resist treating the resulting children as commodities. The parents in the Xytex lawsuit clearly don’t believe their children are "incorrect" or "undesirable," but it is difficult to procure damages for breaching informed consent and covering potential future medical costs without arguing that the sperm donor was absolutely "incorrect" and "undesirable."

Autism research at the crossroads

In April of 2021, Emilie Wigdor finished up a paper titled “The female protective effect against autism spectrum disorder” and put it on the pre-print server medRxiv. Wigdor is a Ph.D. student in human genetics at the University of Cambridge...

The world’s largest and best-known group of human geneticists apologized Tuesday for the role some of its early leaders played in the American eugenics movement, as well as the harmful ways the field has been used to fuel racism and...

Society
© / A Project of the Tides Center 2023 All rights reserved.