This documentary is really three movies in one: a useful explanation of the gene-editing tool CRISPR; the engrossing personal stories of two young people adjusting to life with a genetic disease; and an unfortunately one-sided discussion of the ethics of heritable human genome editing.
By Pete Shanks | 04.02.2020
Biopolitical Times 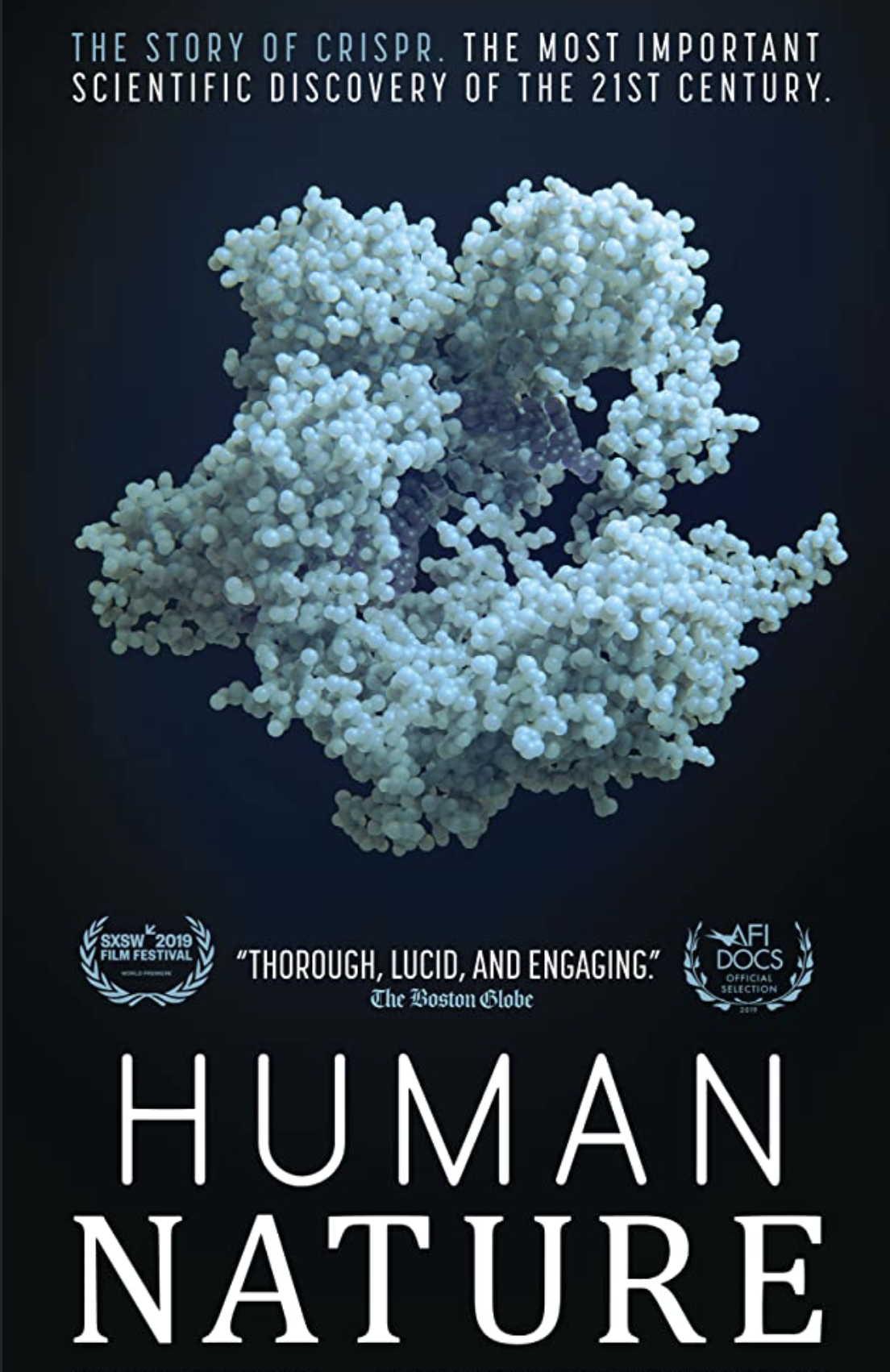 Human Nature, a documentary about gene editing that had been due to open in many theaters in March, is suddenly available for streaming. The movie had its premiere in March 2019 at the South by Southwest Film Conference and Festival, followed by various showings around the world. Some (including one in San Francisco) were followed by panel discussions. The reviews are generally positive (95% on Rotten Tomatoes); being able to see it at home for four or five dollars may well attract a larger audience. It’s worth a look but in some ways it’s disappointing, even disturbing.

This documentary is really three movies in one, plus a preface and epilogue. It starts with clips of molecular biologist and UC Santa Cruz chancellor Robert Sinsheimer in 1966, neatly foreshadowing today’s debates about editing genes. There follows a strikingly substantial exposition of the biology behind CRISPR, with excellent animations of the DNA editing process. The movie does not skimp on the history of CRISPR – it includes several scientists whose prior work informed the famous discoverers – and conveys a good sense of the collegial nature of modern science. That’s the best part.

Running through the film are the stories of two young patients. David Sanchez is a delightful and articulate boy with sickle-cell disease, who insists on living as best he can, despite his essential blood transfusions (“you can’t just not play basketball”). Ruthie Weiss is an equally charming girl with albinism who is also into basketball; she wants to play professionally, “but I don’t think that’s going to happen.” These are not sob stories: the patients and their families have struggled but seem to have come to terms with their lives.

And then there are the experts, pontificating on the possible ethical ramifications of applying the technology to humans before birth. They include:

Having the ethical concerns laid out by people who clearly don’t find them compelling undercuts the film’s attempt at exploring these issues. Does it also reflect a general slant in favor of germline editing? After all, three of the four members of Human Nature’s Scientific Advisory Board – Doudna, Daley, and Church – have openly expressed support for heritable genome editing. (The fourth, Rodolphe Barrangou, Editor-in-Chief of The CRISPR Journal, appears in the film as a bacterial scientist, technologist, and businessman.)

Human Nature offers a very narrow slice of ethical perspectives and no serious discussion of social disruption or class implications. There is a brief but clear suggestion that germline enhancements will be purchased on the open market and thus confined to the wealthy — but barely a mention of the social consequences implied by this assumption. There is also a pervasive sense that editing DNA is, or soon will be, flawless: just a quick snip here and, hey presto! a T has become an A. This message, which reinforces the false notion that we have already written down the entire Book of Life and now are merely annotating and editing it, is a major shortcoming of the movie.

The task of explaining a firm opposition to germline editing is largely left to the redoubtable UC Berkeley geneticist Fyodor Urnov, who does double duty (as does Doudna) as science teacher and commentator. He is the unabashed co-author, with four others, of “Don’t edit the human germ line,” published in Nature in 2015. He stands by the argument made in that article that “heritable human genetic modifications pose serious risks, and the therapeutic benefits are tenuous.” Other concerns are expressed, or at least implied, by Vladimir Putin, Aldous Huxley, a clip from the 1997 film classic Gattaca, and a cameo by Rachel Carson, speaking with her usual clear wisdom.

David Sanchez was gently pressed, near the end of the film, for his opinion about the prospect of editing embryos so that the resulting baby would not have sickle cell disease. His response:

Hmm. I guess that’s kinda cool, that they’re thinking they could do that in the future, but I think that would be up to the kid, later. … I don’t wish that I never had it, no. I don’t think I’d be me if I didn’t have sickle cell.

Note that the only hint of a discussion about parental control, disability rights, and ableism comes from a teenager. His views are informed by his experiences, but will his words carry the same weight for viewers as the experts' do? These are topics that elicit extremely strong and divergent opinions and none of the experts addressed them at all. Moreover, in counterbalance, there are highly emotive but sadly uninformed clips from the 2015 International Summit on Human Gene Editing showing lay people demanding cures for conditions that could never be touched by gene editing.

A lot of talent and production skill went into this picture. The explanatory technique of cutting fairly rapidly between experts works very well to maintain interest, much more effectively than an omniscient narrator. The animation and the overall look of the film are excellent, and it incorporates images from a huge variety of sources. Technically it’s a fine piece of work, but the arguments seem a little stale and incomplete.

Peter Bradshaw’s review in The Guardian is nuanced (four stars out of five) and accurate:

The film is at its most intriguing in its earlier half, when it simply takes you through the growing excitement within the scientific community as the reality of Crispr emerges. … The technology is excitingly new, but the debate isn’t. Rightly or wrongly, this film ends on a note dismissing worries as overblown moral panic.

Indeed it does. The film ends with Sinsheimer, speaking about human genetic engineering more than 50 years ago:

Ours, whether we like it or not, is an age of transition. After two billion years, this is, in a sense, the end of the beginning.

Sinsheimer was actively suggesting that “humans could be the agent of transition to a wholly new path of evolution via designed genetic changes.” In 1985, he convened a meeting in Santa Cruz that is widely credited as the spur for the Human Genome Project. (It also helped promote the institution he headed to the forefront of biological research.) Thanks partly to him, heritable human genome editing has been on the agenda ever since. Steering powerful new tools into cures for existing patients rather than enhancements for future people is one of the most important tasks of our time. Portraying germline interventions as inevitable and downplaying the social and ethical risks, as Human Nature does, works against that urgent challenge.