More Than a Misstep: The NAS Twitter Debacle Represents an Abuse of Authority 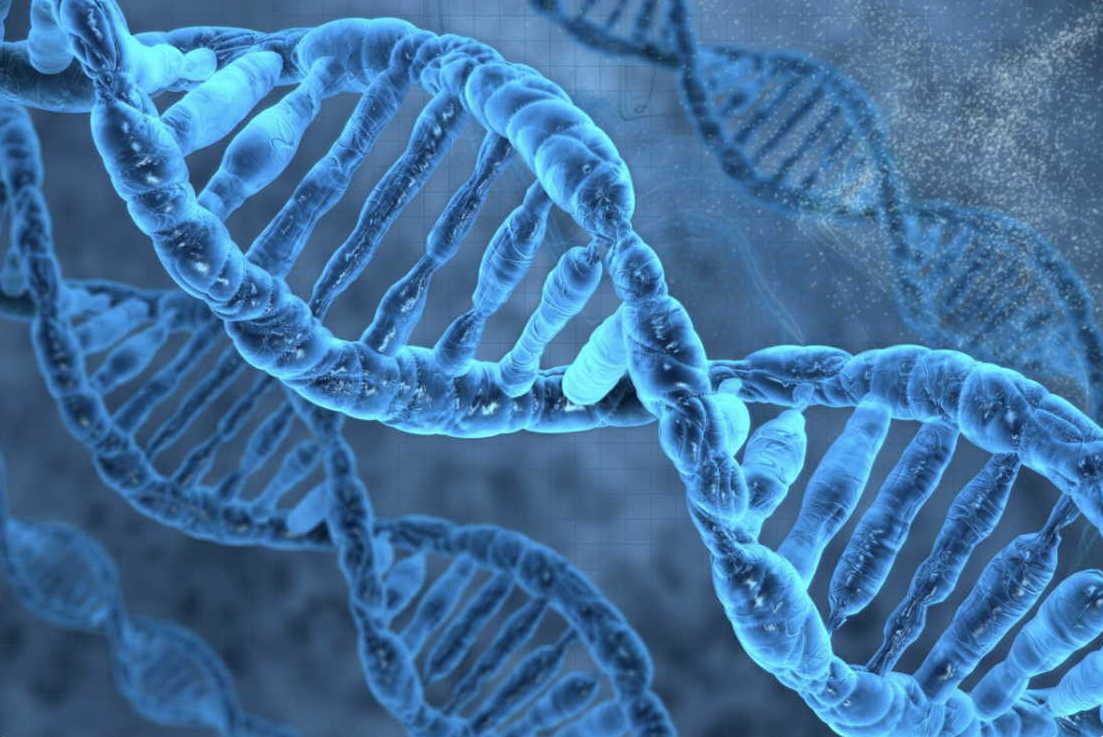 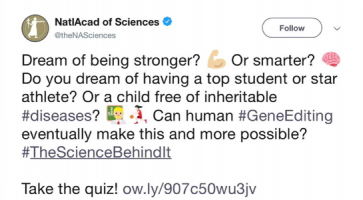 The tweet has since been deleted, and with good reason when you stop to examine the source. In the real world, the NAS and Britain's Royal Society have taken on the task of formally considering how to regulate human germline gene editing — "if society concludes that heritable human genome editing applications are acceptable." They seem to be trying to have it both ways: prudently preparing for society's agreement while effectively arguing in favor of germline editing by demonstrating what prudent preparations they are proposing.

What a mistake. Who at National Academy of Sciences' media office is behind this bizarre tweet & page it links to that seems troublingly upbeat about human heritable gene editing & to trivialize idea of designer babies?

This tweet (and more if you follow the link) doesn't strike me as the most responsible approach to public education, engagement, empowerment on heritable #GeneEditing

She was soon, however, "glad to see others think this is kinda ‘crazy'" and noted that the links involved "more foolishness."

That they do, and in spades. It's not just the tweet that's problematic. The "quiz" referred to is part of a suite of materials, which, in turn, is part of a broader project called The Science Behind It. This was set up by NAS and "tells the story of why each topic is important and what current science tells us about it." The website covers a wide range of topics, from the origin of the universe to data security in the cloud.

On the face of it, that seems to be an innocuous experiment in public education. But if the other topics are as appalling as the one on human gene editing, the whole project should be scrapped immediately. The Q&A is relentlessly optimistic and followed by an extraordinarily useless series of questions that seem to be designed to boost the ego of anyone taking them. The tone throughout is inappropriately sunny, glib, and condescending. (Editor's note: Since publication of this article, the pages relating to human genetics have been deleted from The Science Behind It.)

This trivializing tone is not restricted to NAS tweets or quizzes. On the same day the tweet went out, Stanford's Center for Law and the Biosciences sent out an email announcing, amongst other events, a November 11 talk by Professor Alta Charo, a stalwart of the NAS committees on human genome editing, titled "Who's Afraid of the Big Bad (Germline Editing) Wolf?" Professor Charo certainly isn't; she's all in for it.

September 30 was also not the first Twitter foray into pro-germline propaganda disguised as public education by the NAS. Another tweet on September 27 linked directly to a YouTube video that they produced and summarized thusly:

He's got his father's eyes, his mother's nose, and neither of their inheritable diseases, all thanks to human gene editing! Sound like the stuff of science fiction or science future? Watch the video to find out what traits these 5 strangers would and wouldn't change!

It's hard to describe the bizarre and normalizing nature of this video. In the opening frames, the five strangers might as well be cocreating a video game character. As Anthony Regalado noted in his tweet thread, "This is straight outta George Churches so-called ‘transhumanist wish list."

When the tweet (though not yet the video) was deleted at 9:18 a.m. ET on October 1, someone at NAS finally took to Twitter to offer an explanation, acknowledging that:

Our 2017 report ... recommends that we should not proceed with human genome editing for purposes other than treatment or prevention of disease and disability.

This is disingenuous. (Also, the phrase "disease and disability" is offensive.) Actually, the NAS position is and always has been "not now" — which is considerably more permissive than they imply in the face of a backlash of criticism.

The response is also downright typical: Recall that the members of the NAS committee on human genome editing were shocked to discover that He Jiankui, when he transferred embryos he had engineered into a woman's uterus, believed he had followed the guidelines that NAS had suggested in 2017. Have they not learned from that? Moreover, the NAS response completely avoids the distinction between somatic and germline gene editing, which is at the center of the controversy.

This story is about much more than a single tweet. It's about abusing the hard-earned authority of the National Academies (and the Royal Society) to push a particular point of view. As several Twitter commenters rightly implied, those tweets were nothing but propaganda.

Update: On Wednesday, October 2, the Associated Press published a story titled “Gene editing video stirs talk of designer babies, ethics” about the video referenced above. The story was immediately syndicated widely, indeed internationally. It included critical comments from Alta Charo, who was “disappointed,” and Harvard Medical School Dean Dr. George Q. Daley, another NAS stalwart, who called it “the definition of hubris.” Shortly thereafter, the AP story was updated to lead with the news that the National Academies had pulled the video. The pages relating to human genetics have also been deleted from The Science Behind It.