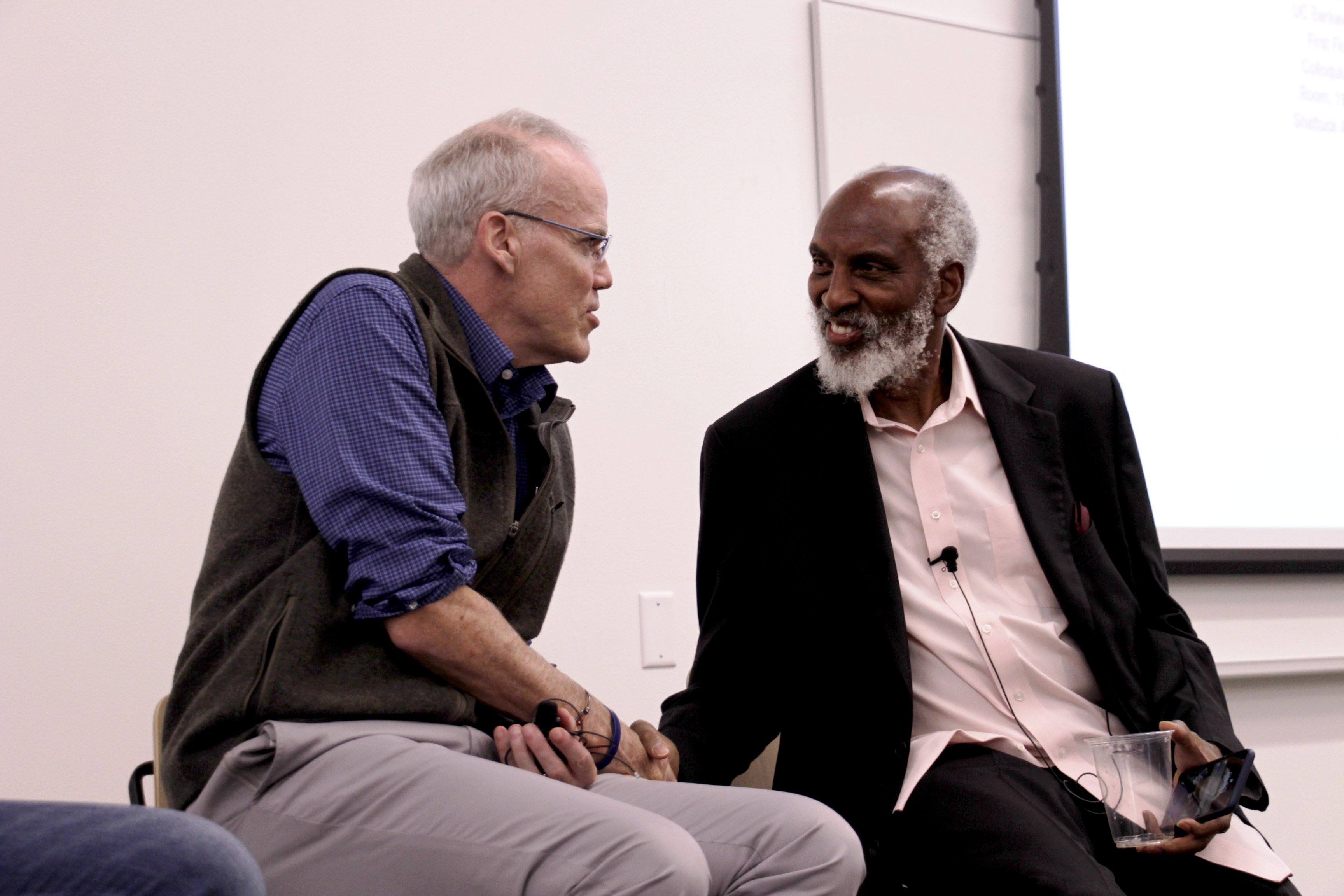 On October 18, 2019, the Center for Genetics and Society, the Haas Institute for a Fair and Inclusive Society, and the School of Public Health at UC Berkeley hosted a lively and thought-provoking conversation between john a. powell and Bill McKibben, two advocates and scholars who have written extensively about why we must join together to secure our future — before it’s too late. The event, “Climate Crisis, Designer Babies, Our Common Future,” drew so much interest that we surpassed the capacity of the venue and had to close online registration. Over 200 enthusiastic participants filled the room; many more have since watched the recording on demand. The event was moderated by Osagie Obasogie, CGS Senior Fellow and Haas Distinguished Chair and Professor of Bioethics in the Joint Medical Program and School of Public Health.

The challenges raised by human gene editing aren't only about CRISPR or gene editing itself: They're about a range of intersecting social issues. Engaging civil society — and activists like McKibben and powell, who are deeply involved in civil rights and climate change — helps connect the dots between these related issues. The overwhelming interest in this event demonstrates the need for broad public input on the development and use of powerful new technologies and highlights that the public is hungry for opportunities to take action.

In the spirit of continuing this critical conversation, here are some selected excerpts from “Climate Crisis, Designer Babies, Our Common Future.”

Bill McKibben on why the history of climate change awareness should shape our decision-making about germline gene editing.

When I wrote The End of Nature in 1989, we were at the beginning of this discussion about climate change. It hadn't yet happened. We were still talking about issuing warnings. Well, we didn't do anything about it. We went full speed ahead. And now we're in a world where, to keep Northern California from burning down, we turn off the power for millions of people. Yet that's the smallest of the inconveniences. There are people already leaving the islands where they've lived for 5,000 years because of what we've done.

One of the things we should say about germline genetic engineering is that it would be good to have the conversation before, not after, we've turned the world upside down. It would be nice to have that conversation and to have it overlap in certain ways with what we've all learned about climate change.

john a. powell on the problems inherent in the belief that humans have the right to exercise unchecked power over nature.

Who are these people who believe that nature is to be dominated, that we're to extract stuff from the earth and then leave it, that everything has utility to be controlled by someone else? That some parts of life and people are “better than” already, before we even do any design? That certain people are better than other people? I want to suggest that's the core of both what we might call the ideology of whiteness and, more specifically, what we call white supremacy. It's believing that certain groups of people are better than other groups of people, and the people that are “less than” are to be exploited. And the people that are “less than” are oftentimes exploited, in part, because they're actually close to nature.

We're just coming up on the 100-year anniversary of when women got the right to vote in the United States. Why did it take so long? Because we have this ideology that women, while we needed them, couldn't be trusted because they were too close to nature.

And, in a sense, we're still fighting those battles. That notion of the right to exploit, the right to extract, the right to dominate is already deeply embedded in the ideology of whiteness, especially, as expressed in America. And so, it's not surprising that the people who actually are closest to that ideology, are willing to have a fairly problematic relationship to nature. … If you accept that notion of superiority, even with the design of babies, we are already into what I would call a racism, a sexism, a hostility toward nature.

This notion of supremacy and domination, and separation from each other and from nature runs throughout when we talk about racism, sexism, homophobia, and, more importantly, whiteness. I always make the point that whiteness is not a biological or genetic trait, is a psychological social trait.

Bill McKibben on how our cultural emphasis on individualism makes it difficult to disrupt the conditions that led to climate change and lead some to support heritable human genome modification.

I think you can make an argument that Ayn Rand may be the most important—if most malevolent—political philosopher of our time. Her basic credo is, “You're not the boss of me. Don't tell me what to do. No one tell anyone what to do”. … It's basically been our political credo in this country, at least since Reagan. “Collective action, the government, that's the problem, not the solution. Do what you want.”

… But it turns out that if your philosophical system melts the polar ice caps, that's a bad sign and perhaps you need a different philosophical system. … That's why it's so important to have this discussion around designer babies now. Because that's the ultimate expression of this philosophy. There are people who say, “Don't tell me what to do with my kid!” And many of them are progressive.

Even if you are an arch libertarian, no one ever thought of anything less libertarian to do than exert extraordinary control over what your offspring will do, feel, think, be, look like. No king has that control over their subjects. These questions around control and power and individualism are at the heart of both these crises.

john a. powell responding to the question, “What's the relationship between designer babies and eugenic thinking?”

Very close. The idea that you're designing a super race and especially in this environment—I mean, who's going to make those decisions? Who's going to have the money? That's already implicit in the assumption that if you're rich, you're smart — and if you're smart, you deserve it.

And people may have cleaned it up a little bit, so they don't say it in racial terms. But it's a very similar mindset: “Some people are deserving. Some people belong, and some are surplus; we don't need them.” Some people actually come very close to saying that; some people are smart enough not to say it, but it's right there.

Bill McKibben on the leverage to make change not previously possible in our society.

It was literally impossible for people to change the world until fairly recently because the world was much bigger than we were. … Similarly, no one had actually invented a way to make changes permanent until one figured out how to start playing around with genetic modification that would be inherited forever.

… The human imagination so far has not grasped that CRISPR technology used unwisely is capable of remaking human beings into something else. We'd better get our imaginations in gear because we live in a moment of great leverage. ... The people of this time and place, especially the “we” that john is describing, are going to make a lot of these choices. And very, very fast. For climate change, we have 10 years or so of leverage left, the scientists tell us. With germline genetic engineering, we're obviously tiptoeing up to the line, and the Chinese went across it last autumn. So, leverage is probably a key word.

Excerpts have been edited for clarity.