Why You Should Be Careful About 23andMe’s Health Test 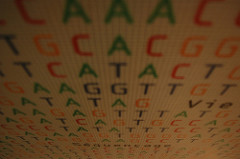 Last month, the DNA-testing company 23andMe secured Food and Drug Administration approval for a new screening for gene-based health risks. Along with celiac disease, Alzheimer’s, Parkinson’s, breast cancer and several other medical conditions, the company can now screen clients for two mutations that have been linked to colorectal cancer.

But “F.D.A.-approved” does not necessarily mean “clinically useful.” 23andMe relies on much simpler technology than tests that you’d get at your doctor’s office. As a result, the company’s tests cannot tell you much about your actual risk of developing the diseases in question.

Here’s how those tests work — and why you should interpret them with caution.

They read your gene.

You can think of your genes as long text documents. The words are your genetic code. Genetic mutations are like typos — imperfections that scientists can spot with some scrutiny.

They compare your gene against a reference gene to find problems.

DNA tests are scientists’ way of proofreading your genes — which they accomplish by comparing them against a gene that’s considered healthy.