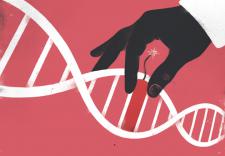 Ayla is the first participant in a clinical trial that will test medical therapies for 10 fetuses with genetic diseases. The idea is that by starting treatment earlier, doctors might have a better chance of providing the eventual children with a better quality of life.

But clinical trials on fetuses raise plenty of ethical questions. How should we be testing treatments on vulnerable fetuses that can’t give consent? And what does this mean for the pregnant person?

Before Ayla was conceived, her parents had already lost two daughters to Pompe disease—a rare genetic disorder that can affect the heart and muscles. Zara died at the age of two, and Sara passed when she was only six months old.

“For this pregnancy, [the parents] were definitely motivated to try to do something different,” says Tippi MacKenzie, a pediatric and fetal surgeon at the University of California, San Francisco... see more

The Council of Europe’s Convention on Human Rights and Biomedicine, better known as the Oviedo Convention, explicitly bans heritable human genome editing in the 29 countries that have signed and ratified it. It has done so for close to a quarter century, which is an inconvenient reality for advocates of the technology, who like to ignore or downplay the existence of the ban. Failing that, they imply that the Convention’s prohibition of heritable genetic modification is out of date...