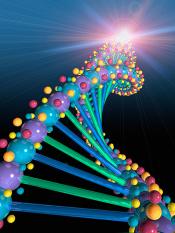 Amanda wanted to warn someone. In June 2021, her daughter — the one she and her husband had tried for three years to conceive — had died after only 28 hours. With an underdeveloped nose, she had battled for every breath.

Nobody knew why. Later, an autopsy report revealed their daughter had an extra 13th chromosome. The condition is nearly always fatal.

“But didn’t we test for that?” Amanda recalled asking herself. “That was kind of where the lightbulb clicked.”

Through her doctor, Amanda had gotten a popular prenatal screening from a lab company. It had come back “negative.”

For three major conditions, including the one her baby had, the report gave the impression of near certainty. The likelihood that she would be born without them was “greater than 99%.”

As she recovered from a cesarean section, Amanda found herself facing a long maternity leave without a child. She shut the door to the empty nursery and began spending what seemed like endless hours of that hazy summer learning about the test.

Can Super Babies Save the World?

Sitting in their toy-filled family room on a sunny September afternoon, Simone and Malcolm Collins were forced to compete with the wails of two toddlers as they mapped out their plans for humankind.

Genetic Selection
© / A Project of the Tides Center 2023 All rights reserved.