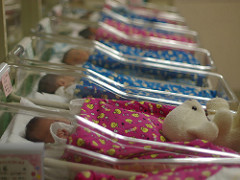 Plans for the National Health Service to sequence the DNA of every baby born in the UK, starting with a pilot scheme of 20,000 children, were announced by health minister Matt Hancock this week. It sounds like the UK is leading the way in high-tech healthcare – but doctors are saying the idea is ethically questionable.

Babies are already tested for certain health conditions soon after birth, so it may seem as though sequencing their genome, their entire set of genes, is a simple upgrade of this routine screening, but that isn’t the case.

UK babies are tested for nine carefully selected conditions, all of which can be avoided or lessened with pre-emptive treatment. For instance, the metabolic disorder phenylketonuria can cause brain damage, but this can be avoided through a low-protein diet.

Unfortunately, most illnesses aren’t as simple or treatable. We are only at the beginning of our journey to understand the complexity of the human genome, and some of the information we have learned so far can create difficult dilemmas.