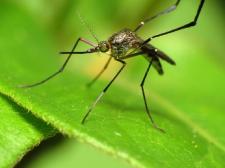 For the first time, scientists have demonstrated that a controversial new kind of genetic engineering can rapidly spread a self-destructive genetic modification through a complex species.

The scientists used the revolutionary gene-editing tool known as CRISPR to engineer mosquitoes with a "gene drive," which rapidly transmitted a sterilizing mutation through other members of the mosquito's species.

After mosquitoes carrying the mutation were released into cages filled with unmodified mosquitoes in a high-security basement laboratory in London, virtually all of the insects were wiped out, according to a report in Nature Biotechnology.

The mosquitoes were created in the hopes of using them as a potent new weapon in the long, frustrating fight against malaria. Malaria remains one of the world's deadliestdiseases, killing more than 400,000 people every year, mostly children younger than five years old.

"We are very excited," says Andrea Crisanti, a professor of molecular parasitology at Imperial College London, who led the research. "This is a game-changer. This is a completely new era in genetics."

"This is an extraordinary paper," says Kevin... see more