In Embryos, Crispr Can Cut Out Whole Chromosomes—That's Bad

By Megan Molteni, Wired | 10. 29. 2020
The DNA-cutting tool has been hailed as a way to fix genetic glitches. But a new study suggests it can remove more than scientists bargained for. 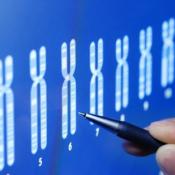 IN 2017, RESEARCHERS at Oregon Health and Science University came out with some big (if true) news. Led by a reproductive biologist named Shoukhrat Mitalipov, the scientists had used the Nobel Prize–winning molecular tool known as Crispr to fix a heart-condition-causing mutation in human embryos—a first in the US. A week later, the journal Nature published details of these boundary-pushing experiments. Up until that point, viable embryos had only been Crispr’d once before, in China. As WIRED reported at the time, Mitalipov’s team’s editing appeared to work surprisingly well. But one thing didn’t go as expected.

Crispr works by cleaving DNA apart at a specific location in the genome. Then it’s the cell’s job to repair the resulting double-stranded break. One way to make sure it does it right is to supply a bit of corrective DNA along with the Crispr components. But Mitalipov’s group reported that their embryos didn’t use the template they provided. The embryos had been created by fusing a healthy donor’s egg with a sperm that carried the mutation. But it turned... see more