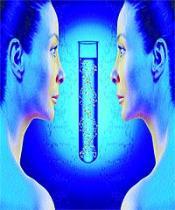 "Human Cloning" by newsonline is licensed under CC BY 2.0

Cloning is a form of asexual reproduction. A child produced by cloning would be the genetic duplicate of an existing person. If you cloned yourself, the resulting child would be neither your son or daughter nor your twin brother or sister, but a new category of human being: your clone.

The great majority of people have an intuitive sense that human beings should not be cloned. Arguments offered for and against reproductive cloning are given below. A summary comment follows at the end of the arguments.

1. Reproductive cloning would foster an understanding of children, and of people in general, as objects that can be designed and manufactured to possess specific characteristics.

2. Reproductive cloning would diminish the sense of uniqueness of an individual. It would violate deeply and widely held convictions concerning human individuality and freedom, and could lead to a devaluation of clones in comparison with non-clones.

3. Cloned children would unavoidably be raised "in the shadow" of their nuclear donor, in a way that would strongly tend to constrain individual psychological and social development.

4. Reproductive cloning is inherently unsafe. At least 95% of mammalian cloning experiments have resulted in failures in the form of miscarriages, stillbirths, and life-threatening anomalies; some experts believe no clones are fully healthy. The technique could not be developed in humans without putting the physical safety of the clones and the women who bear them at grave risk.

5. If reproductive cloning is permitted to happen and becomes accepted, it is difficult to see how any other dangerous applications of genetic engineering technology could be proscribed.

Rebuttals to Arguments Against Reproductive Cloning

1 and 2. This will be true only if we allow it to be true. There is no reason that individuals and society can't learn to embrace human clones as just one more element of human diversity and creativity.

3. The problem of "expectations" is hardly unique to cloned children. Most parents learn to communicate their expectations about their children in a moderate and ultimately positive way.

4. Every medical technology carries with it a degree of risk. Cloning techniques will eventually be perfected in mammals and will then be suitable for human trials.

5. Human society can accept or reject any proposed technology on its own merits.

Arguments in Favor of Reproductive Cloning

1. Reproductive cloning can provide genetically related children for people who cannot be helped by other fertility treatments (i.e., who do not produce eggs or sperm).

2. Reproductive cloning would allow lesbians to have a child without having to use donor sperm, and gay men to have a child that does not have genes derived from an egg donor (though, of course, a surrogate would have to carry the pregnancy).

3. Reproductive cloning could allow parents of a child who has died to seek redress for their loss.

4. Cloning is a reproductive right, and should be allowed once it is judged to be no less safe than natural reproduction.

Rebuttals to Arguments in Favor of Reproductive Cloning

1. The number of men and women who do not produce eggs or sperm at all is very small, and has been greatly reduced by modern assisted-reproduction techniques. If cloning could be perfected and used for this limited group, it would be all but impossible to prevent its use from spreading. Further, this argument appropriates the phrase "genetically related" to embrace a condition that has never before occurred in human history, one which abolishes the genetic variations that have always existed between parent and child.

2. Even if cloning were safe, it would be impossible to allow reproductive cloning for lesbians or gay men without making it generally available to all. Policy and social changes that protect lesbian and gay families are a much more pressing need.

3. Throughout history, parents who have lost children have grieved and sought consolation from family and community. "Replacing" the deceased child by cloning degrades and dehumanizes the child, its replacement, and all of us.

4. Rights are socially negotiated, and no "right" to clone oneself has ever been established. Furthermore, there is an immense difference between a woman's desire to terminate an unwanted pregnancy and the desire to create a genetic duplicate of another person. There is no inconsistency between supporting the former and opposing the latter.

The Center for Genetics and Society believes that when all the arguments are considered together the case for allowing human cloning is not compelling, and that the harms of doing so are great.