Dr. Jeffrey Steinberg of The Fertility Institutes sells PGD for sex selection, is again starting to sell a choice of eye color and plans to offer more traits.
By Pete Shanks | 09.05.2018
Biopolitical Times 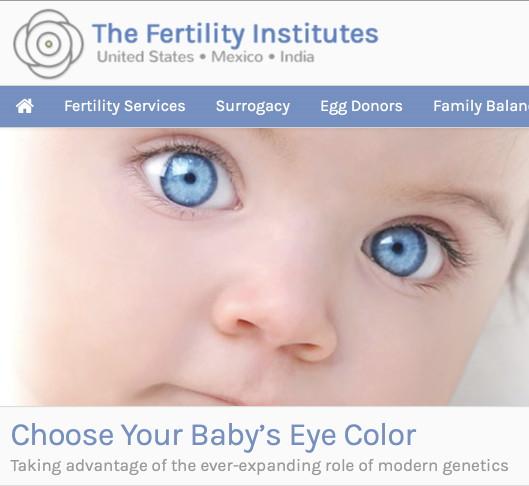 At irregular intervals over the last decade or so, Dr. Jeffrey Steinberg of The Fertility Institutes has used the media to promote eugenic ideas to make money. He already uses the embryo selection procedure known as preimplantation genetic diagnosis (PGD) for sex selection, and fully intends to try to select other traits. He is starting to sell a choice of eye color, he has talked about skin color, and haircolor is (he says) “about 18 to 36 months away.”

He’s been making that pitch for about a decade. We first became aware of him in January 2009, when he was widely quoted as supporting the fertility practitioner who transferred six embryos into the womb of the woman who became known as the “Octomom.” (Two embryos split and she had eight babies; the doctor later lost his license.) In response to the widespread criticism, Steinberg countered:

“Who am I to say that six is the limit? There are people who like to have big families.”

Just the month before, December 2008, the website of The Fertility Institutes announced that they would shortly be offering not just gender selection but trait selection: specifically, choice of hair, eye and skin color. On February 2, 2009, Gautam Naik broke the story in the Wall Street Journal, under the memorable headline:

“Screening embryos for skin color isn’t about reproductive choice,” said CGS Senior Fellow and University of California, Berkeley, Professor Osagie Obasogie at the time. “It’s about leveraging social prejudices to try to give your kid a leg up. ... This is the tip of the iceberg in terms of how reproductive and genetic technologies could fundamentally reshape race relations.”>

Over the next month, Steinberg’s claims gradually drew very widespread criticism, and several fertility experts expressed outrage and concern that this kind of talk could “turn public sentiment against all preimplantation genetic diagnosis.”

For a while, Steinberg stood his ground. On March 2nd, the BBC reported him as expecting the first trait-selection baby to be born in 2010, and quoted him as saying:

“I would not say this is a dangerous road. It’s an uncharted road.”

On March 4th, however, Steinberg backed off. For the time being.

But it’s quite certain that he never forgot the idea of trait selection. He presumably saw the discussion in 2011 about police being able to use DNA testing to identify a suspect’s eye color. Well, the probability of it anyway. There is now on the websites of both The Fertility Institute and its New York affiliate Ferny a very clear listing of the probabilities of a child having blue, green or brown eyes, based on their parents’ eye color. Strangely, these pages do not seem to be linked from either home page, but they do both say:

We are now, for the first time in 10 years, once again accepting parents wishing to participate in this exciting enhancement of reproductive possibilities.

On September 4th, 2018, he told Deseret News that he practices “happy medicine,” and began offering eye-color selection “about a year ago.” The 10 years are technically not up till 2019, but who’s counting?

Meanwhile, there has for years been plenty of money in sex selection: In 2007, one Australian couple with three young sons were reported as having paid Steinberg $40,000 to have a daughter. Which, as CGS Executive Director Marcy Darnovsky explained in 2012, is problematic:

“If you’re going through the trouble and expense to select a child of a certain sex, you’re encouraging gender stereotypes that are damaging to women and girls. …What if you get a girl who wants to play basketball? You can’t send her back.”

Steinberg keeps feeding controversy. He was featured on an August 24th ABC discussion of “designer babies” (transcript) and earlier that month freely admitted to CNBC that:

“The bulk of the patients that we see are doing in vitro fertilization only to choose the gender. We do not require people to have a first baby in order to request the gender on the second baby.”

Well, he attracts those patients because that’s what he’s selling. Social sex selection has unfortunately become more widely accepted in the U.S., even when it means selling IVF and PGD to people with no fertility problems and no risk of transmitting heritable illness to their offspring. Most fertility practitioners who offer this justify it as “family balancing” (choosing the sex of a future child on the basis of how many children of each sex a family already has). But Steinberg is taking it even further, using PGD for couples with no risk factors, and dispensing with the veneer of “family balancing.”

Notice that what he actually does is blame his customers: “There is an unbelievable drive in some of these couples that are interested in gender selection,” he told Breitbart earlier this year.

The annual Centers for Disease Control (CDC) report demonstrates that Steinberg’s clinics do use PGD/PGS in an extraordinary 89% of IVF procedures they conduct; the national average is 5% and only four other reporting clinics in the U.S. (of 464) use the technique in 50% or more.

Steinberg’s clinics also tend to transfer rather fewer embryos than usual — an average of 1.4 per woman under 35 and no more than 2 for the very oldest patients (over 44), which is well within the guidelines recommended by the professional societies. Of course they do: Steinberg is clearly selling selection. The whole point of his pitch is to choose the “right” embryo.

But if the demand were as urgent as he implies, surely his three clinics would have more than 73 clients a year. That’s the 2015 figure (the latest available) from CDC.

That is probably enough to make a good living. IVF is expensive at best, and PGD and other options can easily bring the cost up to $20,000 or more per attempt. Moreover, most attempts fail, even for young women using their own eggs; how many try again is unclear but, anecdotally, many do. There are no money-back guarantees in this business.

Commercially the assisted-reproduction-with-selection business may only just be getting started. It doubled in the last decade, and some estimates predict that PGD alone will become a half-billion-dollar technology within the next four years. Most likely, Steinberg is positioning his clinics to exploit what could be a rapidly growing market.

That is presumably why he appears in the media so much. He’s advertising.