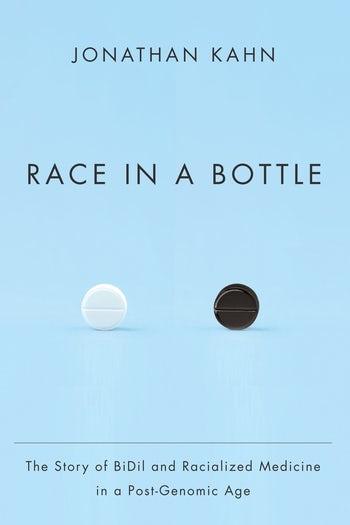 Shaq does not have heart failure — so why choose him? Because he is a celebrity and, perhaps more importantly, because he is black. This is relevant because, in 2005, BiDil became the first drug ever approved by the FDA with a race-specific indication: to treat heart failure in black patients. Arbor describes the “Shaquille Gets Real About Heart Failure” campaign as “a national educational initiative designed to raise awareness around the heart failure disparity in the African American community and ways to manage this condition.”

As I argue in my book Race in a Bottle: The Story of BiDil and Racialized Medicine in a Post-Genomic Age, the FDA’s approval gave the imprimatur of the federal government to treating race as, in effect, a genetic category. This, of course, is scientifically inaccurate and socially dangerous. So, how did this happen?

The purported rationale for granting race-specific approval was that, because the underlying clinical trial had tested the drug only in black research subjects, the approval had to be limited to use in that population. On the face of it, this may sound logical — that is, until you realize that many, perhaps most, of the drugs ever approved by the FDA were based on single-race clinical trials.

It’s just that those trials were in white people.

In other words, when a drug was tested in white subjects, the FDA assumed it was safe and effective for all people; but when a drug was first tested in black subjects, the FDA deemed it safe and effective only for black people. The inescapable (even if unintended) messages sent by the approval of BiDil were: 1)  race is genetic, and 2) black people are less fully representative of humanity than white people.

The irony of all this is that even BiDil’s inventor believed the drug worked in all people regardless of race. It turns out the racialization of BiDil was driven more by considerations of extending patent protection than by any medical evidence showing it worked only in black people. BiDil was created by combining two off-patent generic drugs into a single pill and marketing it to a selected group of patients — African-Americans — who are disproportionately affected by cardiovascular disease due to entrenched social and economic inequalities. These moves allowed BiDil’s inventor to acquire a new patent and inflate the price while claiming to be addressing health disparities.

When BiDil was first approved it received an avalanche of free press worldwide. But in the subsequent years, sales foundered. There are many possible explanations: corporate greed (its corporate sponsor NitroMed priced the drug at seven-to-eight times the amount of other comparable heart failure drugs); generic competition (the two generics the combined to create BiDil cost only one-twentieth the price); problems with preferred insurance coverage; and insufficient marketing could all be to blame, as could a combination thereof. NitroMed stopped actively marketing BiDil in 2008 and, over the next few years, rights to the drug passed from one firm to another, eventually landing with Arbor.

Which brings us back to Arbor’s recent attempt to leverage Shaq’s celebrity to raise BiDil’s profile in a renewed effort to market it to black people suffering from heart failure.

From all indications, BiDil appears to be a reasonable therapy for heart failure if a doctor deems it appropriate. Taking BiDil is unlikely to harm anyone and might provide real help to some people. The harm of BiDil is not from its chemical characteristics but from its marketing as a race-specific drug. This campaign reinforces the FDA’s message that there is a biological basis for race or, as some original proponents of BiDil asserted, that heart failure is somehow a “different disease” in black people (the same justification the U.S. Public Health Service used when conducting the notorious Tuskegee Syphilis study).

The return of BiDil in the “Shaq Gets Real About Heart Failure” campaign testifies to the enduring power of characterizing race as a biological construct. No matter how often it is challenged, no matter how many times it may seem to be debunked, this idea keeps finding its way back — as if reanimated by White Walkers in the Game of Thrones. So if you happen to see Shaq hawking BiDil in the coming months, bear this in mind: Heart failure is real, health disparities are real, and BiDil may treat heart failure — but its efficacy has nothing to do with race. Using race as a marketing tactic has more to do with patent protection — and with the resurgence of discredited ideas that “race” is a biological rather than a social category — than with medical evidence.

Kahn is the James E. Kelley Chair in Tort Law Professor of Law at Mitchell Hamline School of Law. His most recent book is Race on the Brain: What Implicit Bias Gets Wrong About the Struggle for Racial Justice.

Several academic and commercial research groups are racing to make up a shortage of life-saving human organs with the comparably sized hearts, kidneys, and livers of pigs.
Animal Biotechnologies

Two sisters, their mother and aunts showed a mutation on a BRCA gene and an elevated risk of breast and ovarian cancer.
Genomics

DNA databases have become like Facebook for genes, driven by the same fundamental human desire to connect.
Genomics
© Center for Genetics and Society / A Project of the Tides Center 2020 All rights reserved.