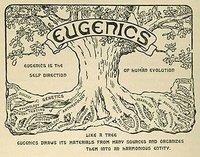 Critics of efforts to "improve" our species via heritable genetic modification are sometimes reluctant to call this "eugenics," for fear that enhancement enthusiasts will derail the conversation by invoking Godwin's law.

The argument against using eugenics as a frame of reference for new human biotechnologies is generally that the 20th-century variety was defined by state action (not entirely true), whereas human betterment enabled by 21st-century science will be a different thing entirely.

So it’s almost refreshing to read, in a respectable, albeit conservative, daily newspaper:

Eugenics need not be a dirty word — instead, it could be lifesaving technology

The article in question, by Madhumita Murgia who writes for Wired as well as the Daily Telegraph, was prompted by the fact that today the UK law comes into force that allows the use of nuclear replacement technology in attempts to avoid the births of children with mitochondrial (mtDNA) disease.

Eugenics is a dirty word, most commonly associated with racist profiling, or Nazi experiments. But the time has come to rethink our attitude. It can also be understood as manipulating the genome in order to solve human health crises.

At least she admits that mtDNA interventions do affect the germline, and are in practice eugenic. But there is a lot wrong with the piece. For instance:

The article gets even worse when she turns to the notoriously failed experiments that prompted this year’s very public concerns about the gene editing of embryos. She supports them thus:

A new type of gene editing technique, known as CRISPR-Cas 9, was already used in human embryos by Chinese researchers to modify the gene responsible for beta-thalassaemia, a potentially fatal blood disorder.

This experiment, while decried as unethical and dangerous, was in fact a crucial lesson in revealing the problems with the CRISPR technique, and enhanced the scientific community’s understanding of how gene editing works in practice.

So for the sake of those who need it the most, we must be brave enough push the frontiers of present-day human knowledge into territories unknown.

Robert Pollack warned about eugenics in his letter to Science in May [pdf]. Nathaniel Comfort warned about eugenics at length in The Nation in August. They were not scaremongering, they were helping to bring a debate we need to have out of the shadows and into the limelight. Perhaps inadvertently, so is Madhumita Murgia.

It may be time to return to first principles and explain how eugenics was not merely misapplied, but wrong.