Eugenics in California: A Legacy of the Past? 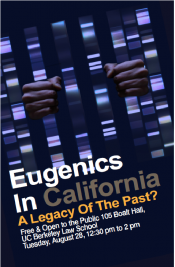 For much of the 20th century, California was at the forefront of eugenic ideology and practices in the United States, and holds the dubious distinction of being the state with the highest number of eugenic sterilizations performed under the authority of law – some 20,000 procedures between 1909 and the mid-1950s. Coerced sterilizations continued in public hospitals into the 1970s, and it has recently come to light that in very recent years, women prisoners in California have been sterilized without their consent or knowledge. Today, California is a leader in research and services related to human genomics and assisted reproductive technologies. Speakers at this public event will consider the long history of eugenics in California and explore continuities and discontinuities in the uses and misuses of genetic ideas and practices.

We provide an overview of the patterns of the 20,000 eugenic sterilizations performed in California state institutions from 1909 to 1979, with close attention to race, gender, class, and diagnosis. We will also highlight stories of sterilization victims and the ways in which they attempted to challenge the state's authority to control and contain their reproductive rights. As we will demonstrate, the process had a devastating impact on the victims.

The feature-length documentary ¿Más Bebés? (working title) investigates the history of Mexican American women who allege they were coercively sterilized at Los Angeles County-USC Medical Center during the 1960s and 70s.  Many spoke no English, and testified that they were prodded into tubal ligations during active labor.  The sterilizations triggered the 1978 class action lawsuit, Madrigal v. Quilligan, and a protest campaign that galvanized the Chicana feminist movement.

Since 2003, Justice Now has been working collaboratively with people in California’s women’s prisons to document how prisons violate the international right to family and function as a tool of reproductive oppression. Presenters will place a spotlight on personal experience with as well as the systemic pattern of destruction of reproductive capacity of women of color and gender variant people in California women’s prisons through several state-sanctioned policies, including forced and coerced sterilizations (e.g. the illegal and routine sterilization of hundreds of people in prison during labor and delivery), and other violations of safe motherhood and reproductive justice.

Should We Worry About a New Eugenics?

Today's fast-developing genetic and reproductive technologies offer significant benefits, but can also be misused in ways that exacerbate existing inequalities and create entirely new forms of injustice.  California, a hotbed of eugenic advocacy in the last century, is today a center of biotechnology research and commercial development and the assisted reproduction sector, as well as home to some troubling techno-enthusiastic ideologies. Our efforts to confront California's eugenic history can help prevent these dynamics from veering toward a new eugenics.

Co-sponsored by the Center for Genetics and Society and UC Berkeley’s Haas Diversity Research Center, School of Law, Institute for the Study of Societal Issues, American Cultures Center, Disability Studies program, Center on Reproductive Rights and Justice, and Center for Race and Gender.

This event is wheelchair accessible. Captioning will be provided. To request an accommodation, please email [email protected]

By Pete Shanks | 12.11.2019
Biopolitical Times
Cumulative evidence suggests a dangerous technophilia that seems to blind Church to the fact that he repeatedly promotes eugenics.
Animal Biotechnologies

Sperm Donor Sues Because His Medical School Misused His Sperm

The complaint alleges that the clinic never really even tried to live up to its promises. It says, for example, that the clinic didn’t follow up with those who received his sperm to see if children were born.
Assisted Reproduction
© Center for Genetics and Society / A Project of the Tides Center 2020 All rights reserved.