Calico and AncestryDNA have discovered to their surprise that genetics have very little to do with lifespan.
By Pete Shanks | 11.07.2018
Biopolitical Times 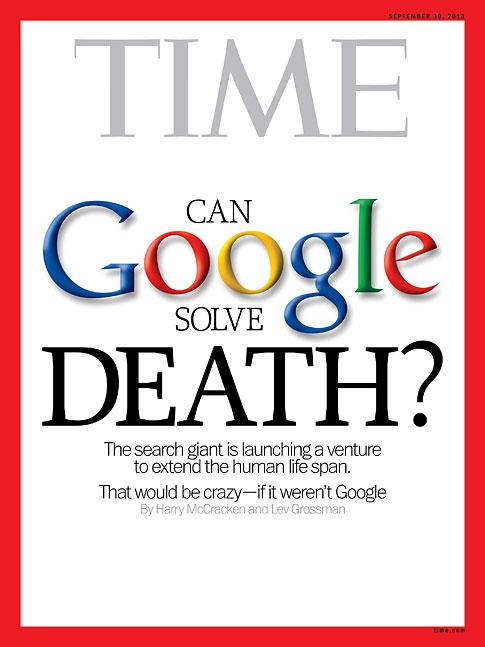 Five years ago, Time magazine published the cover story illustrated at left: Can Google Solve Death? We have an answer: No. At least, not the way they thought they could. That’s a conclusion drawn from a new scientific paper describing a very large study that STAT summarized:

Life span has little to do with genes, analysis of large ancestry database shows

The company that Google set up for this task, Calico, has always been rather secretive and it was not clear at first how they intended to proceed. They established a number of partnerships to investigate the biology of aging and related matters, but one in particular drew attention: In July, 2015, Calico announced a collaboration with AncestryDNA “to investigate human heredity of lifespan.”

Three years later, that partnership quietly ended, with no obvious results but rumors that a peer-reviewed paper would follow. This is it. Using Ancestry’s vast database, they first confirmed that “somewhere between 20 percent and 30 percent of longevity appeared to be due to genetics.” Note the careful “appeared.”

Yes, lifespan does to an extent run in families, as you may have noticed. But using the same analysis, they found that spouses have similar lifespans. So do in-laws. According to the new study, that knocks the possible genetic inheritance factor down to “an upper-bound heritability estimate of 7%.” The paper also argues – states might be a better word choice; or notices – that “sociocultural factors of relevance to human life span are indeed inherited through families.”

So genes aren’t everything? Who’d have thought!

The lead authors of this study work for Calico, and the company deserves credit for not burying the research. What else they are doing is still unclear, though it is known that Calico has a substantial joint venture with Abbvie, a pharmaceutical company with $70 billion in assets and net income of $5 billion. Maybe Calico will discover something useful.

Meanwhile, Death seems to have the advantage.